Hindustan Contessa EV concept – A reimagination worth hitting the road

In the minds of Indian automotive enthusiasts, the Hindustan Contessa sedan occupies a special place. It is no “Indian muscle car” by any means or even the best product of its time. However, for the millennials, the Contessa has a strong nostalgia element associated with it. Many are in the lookout for the ‘boss car’ of their childhood on the used-car market but decent examples can only be found when the stars align.

Based on the Vauxhall Victor FE, Hindustan Motors (HM) sold the Contessa as a premium made-in-India offering alongside the Ambassador. Production started in 1984 and continued for 18 years from then. Over this span, the car received a range of petrol and diesel motors from Isuzu.

Cochin-based product design firm, Mightyseed Designs has reimagined the iconic Hindustan Contessa in an EV avatar. Had it not been for the badging, it would have been tough to link its design with HM or the real Contessa. Still, Mightyseed Designs states that this is an invitation for Hindustan Motors to make a grand comeback.

As you can observe, the design philosophy makes a completely different approach from the original rigid lines. The rectangular front fascia, a tasteful throwback that blends flawlessly with the coupe silhouette, presents the ‘HM’ logo in the best modern way we have ever seen. Though its design inspiration came from a boxy sedan, Mightyseed Designs’ Contessa EV is essentially a three-door grand tourer.

With subtle strokes, the Contessa EV intertwines elegance with strengthening presence. Being a concept, there was no limit to the team’s imagination — as evident from the strand-like tyre walls, sharp ridges at the front, absence of physical door handles and the narrow camera sticks in place of ORVMs (a tricky design to pass various safety regulations). The car’s long wheelbase ensures good cabin space and easy ingress to the rear (for a four-seater GT) albeit without an extra door. 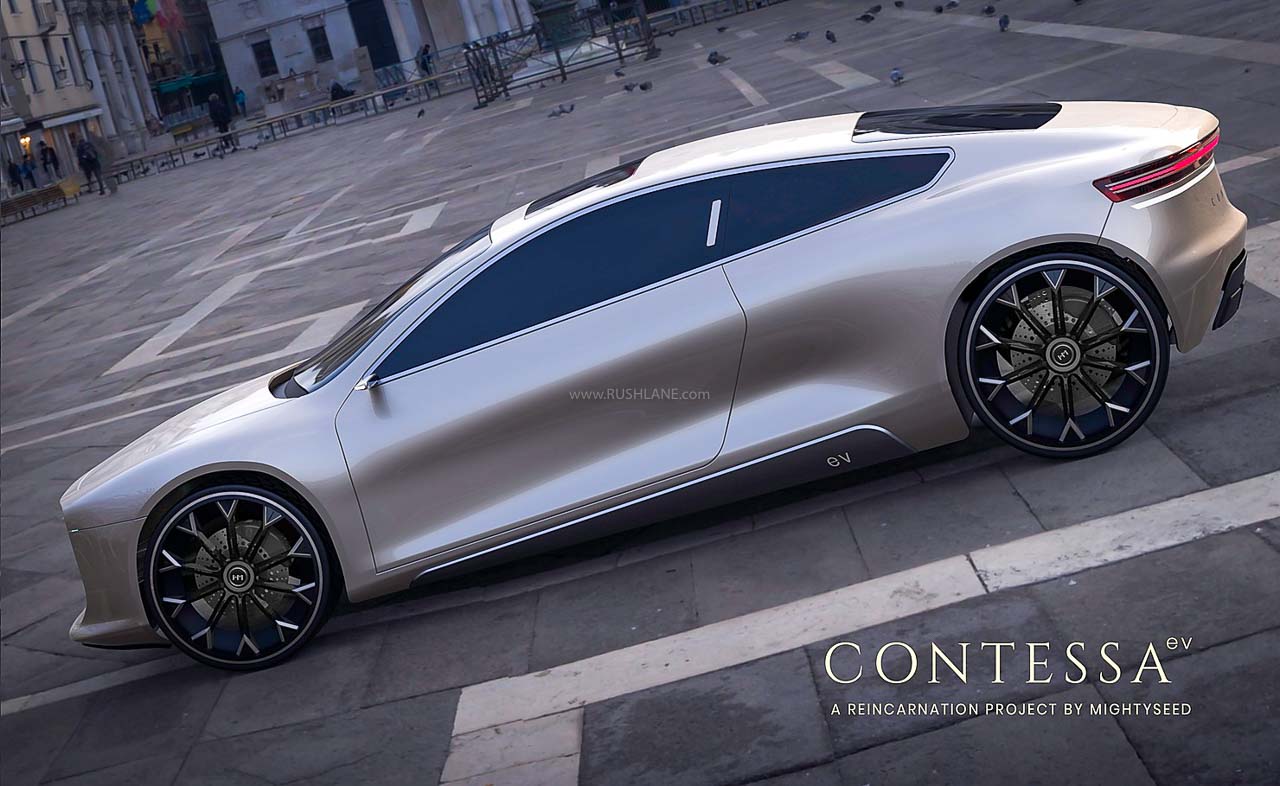 Unlike the growing fashion among premium EVs, the Mightyseed Contessa EV does not sport hub-mounted or coaxial motors in line with its large 10-spoke wheels. It rides significantly close to the ground without looking odd. LED taillamp bars have become a trend in the global automotive industry and the same has been applied here. Mixed with the sloping roofline, the rear profile appears to carry some Porsche Taycan influence.

Mightyseed Designs has done a brilliant job at creating a stylish GT. One might find it difficult to imagine a grand tourer out of a Contessa but many are eagerly looking forward to the name’s reintroduction in any format.