The BS 6 emission norms kick in from 1st April, 2020. With the deadline coming in closer, most OEMs have started to introduce BS6 compliant models to ensure that BS4 inventory from their pipeline is cleared well in time. The latest update has come in from Honda, which is scheduled to bring in the BS6 petrol City sometime soon. Pricing will see a minor and acceptable bump of around Rs 10 – 15K, depending upon the trim.

While the launch date hasn’t been confirmed, the upcoming variant-wise pricing has already leaked. The entry-level SV MT trim gets a price increase of Rs 10K while the V CVT & VX MT trims get expensive by 16K. The City will continue to draw power from its 1.5 litre 4 cylinder iVTEC engine which dishes out 119 hp. As the price increase is relatively nominal, we don’t expect any update coming in as far as the equipment level on the trims are concerned.

Honda has confirmed that it will be upgrading at least 2 more of its engines, the 1.5 litre iDTEC diesel motor and the 1.2 litre petrol engine. The 1.5 litre motor is seen in majority of Honda’s portfolio, from the Jazz to the City. The smaller petrol engine is available on cars like Amaze, WR-V and Jazz. The engines shall get updated before April 2020. 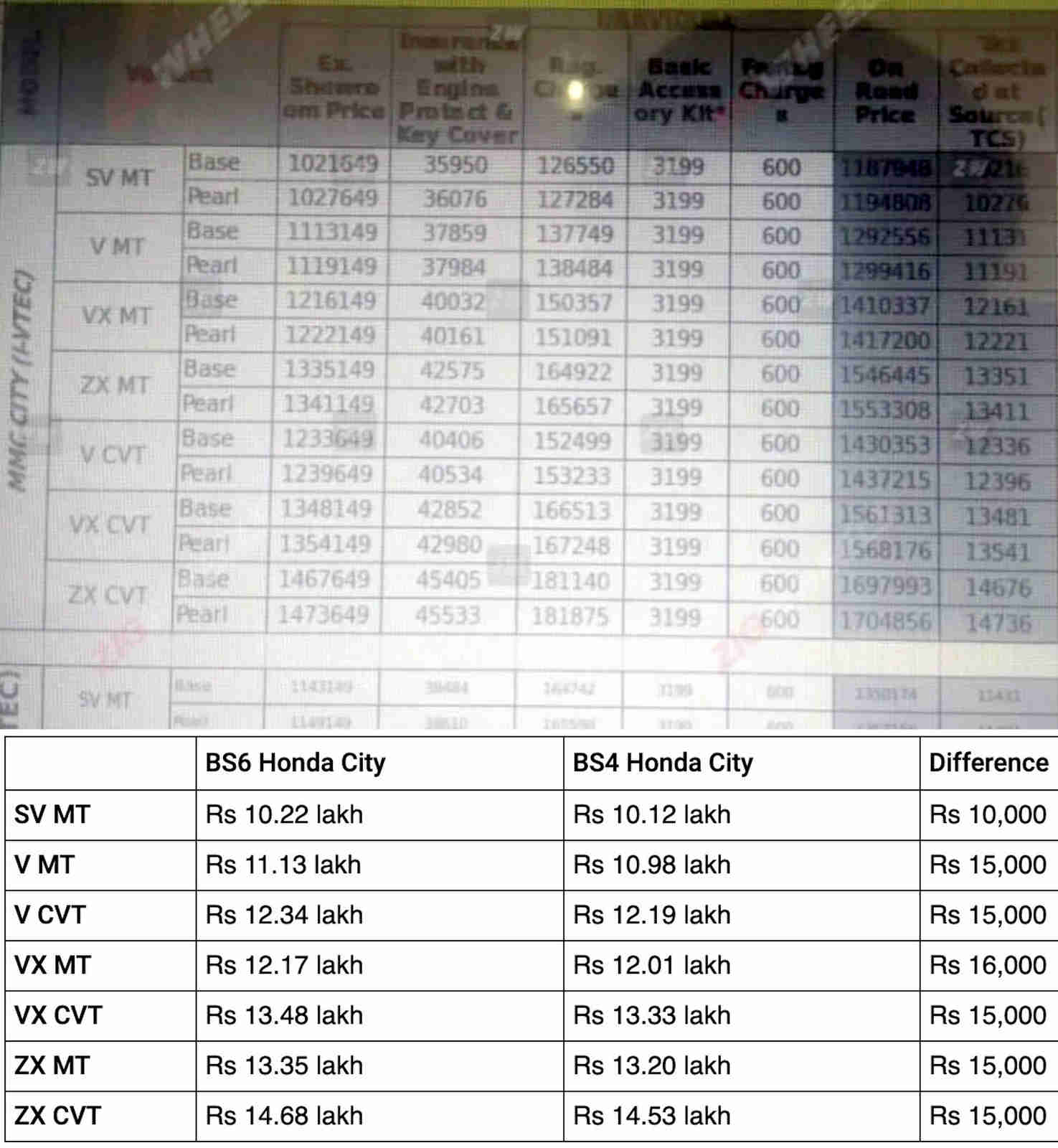 Honda, like most manufacturers in India is going through a relatively tough phase. It was earlier planning to bring in the HR-V SUV in India, however considering the market scenario, it scrapped the plan. There have also been reports which suggested that it is planning to scale down its operations at its Noida-based factory (to optimize costs and plant utilization levels).

The current-gen City has been on sale since 2014 and had got a mid-life facelift in 2017. It faces close competition from Hyundai Verna and Maruti Ciaz. The three continue to fight for the top-spot in monthly sales reports and more often than not, are very close as far as numbers are concerned.

Honda is scheduled to unveil the 5th generation City on 25th November in Thailand which shall come to Indian shores sometime next year. Major update on the powertrain front will be availability of a CVT option with a diesel motor and a mild hybrid petrol engine. Cars like VW Vento, Skoda Rapid and Toyota Yaris will continue to provide additional competition to the City.