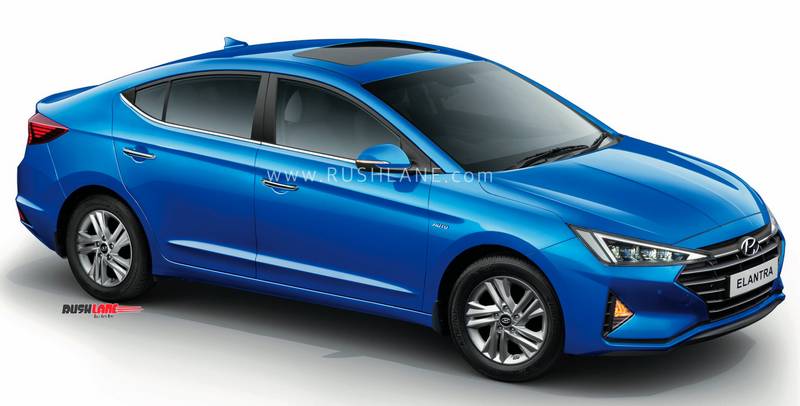 Hyundai plans to finally introduce the long-delayed Elantra facelift in India on 3rd October. Bookings have opened across India from today. Globally, Hyundai had updated the Elantra last year in August, however it has continued to sell the pre-facelift Elantra in the country till now.

Updated Elantra won’t come along with a diesel engine option but will be launched only with a petrol motor. The petrol motor will be BS-VI emission norms compliant and will come with two transmission options, a 6-speed MT and a torque converter unit. The same engine dishes out 152hp in its current iteration.

The discontinuation of the diesel engine makes sense, considering the current market dynamics. As far as sales of the segment in April-July’19 period is concerned, it is the petrol variants of these executive sedans which have outsold their diesel counterparts by a considerable margin.

The current market leader, Honda Civic got 1058 buyers for its petrol version while just 110 takers for its diesel variant. Other cars also had a similar story. The petrol-diesel split for Skoda Octavia stood at 580-253, for Toyota Corolla Altis it stood at 402-80 and for the Elantra, the split was 214-90 units.

Clearly, numbers point out that customers are majorly on the lookout for petrol variants of these executive sedans. Additionally, the upcoming BS-VI emission norms will further complicate the market dynamics by considerably shooting up the prices of the diesel versions of these cars. Hence, it makes sense for OEMs to go slow on launch of diesel variants of their new vehicles (even facelifts).

Hyundai may plan to bring in a diesel engine later in the future, but it most probably won’t happen at least till H1 2020. If it plans to bring in a diesel alternative, it will most likely be an iteration of the new 1.5 litre diesel motor which has jointly developed by Hyundai and Kia.

It is the same motor which is currently offered on the Seltos as well. The motor is scheduled to replace the current 1.6 litre diesel engine across all models of Hyundai. Pricing of the Elantra shall be around the INR 14-19 lakh mark. Minor price increase is expected thanks to the overall upgrades which the facelift will carry.