Grand i10 NIOS is the new gen Grand i10, which was launched in India last year. It is one of the best selling car from Hyundai India. Ahead of the festive Diwali season, Hyundai plans to launch a new special edition of the Grand i10 NIOS. Dubbed as ‘Corporate‘, this new variant is essentially an extension of the Magna variant.

New Hyundai Grand i10 NIOS Corporate Edition is based on the Magna trim. In addition to all the features on offer with Magna trim, it gets some more features. There are a few minor cosmetic upgrades as well. The Corporate Edition will sit in between the base Era trim and the higher Sports variant.

In terms of cosmetic upgrades over the Magna NIOS, the Corporate Edition NIOS gets new body-coloured ORVMs with integrated turn indicators. Instead of 14-inch steel rims with wheel covers it gets 15-inch gunmetal styled alloy wheels. Also, the ‘Corporate’ emblem is spread all across its exterior. Rest of the details on the exterior are identical to the Magna trim.

Inside, there are quite a few changes in terms of features. Instead of a basic 2 DIN stereo system, it gets a 17.14 cm (6.85 inches) touchscreen infotainment system with Android Auto, Apple CarPlay, smartphone navigation and much more. 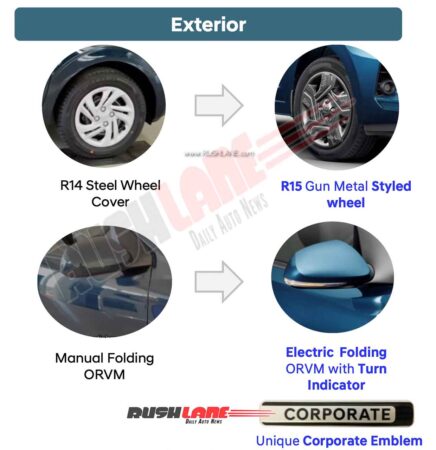 It also gets a first in segment ABAF (Anti Bacterial Anti Fungal) Seats and an air purifier with the addition of gesture control and Hepa filter. The OVRMs can now be electrically adjusted instead of manual adjustment in the Magna trim. 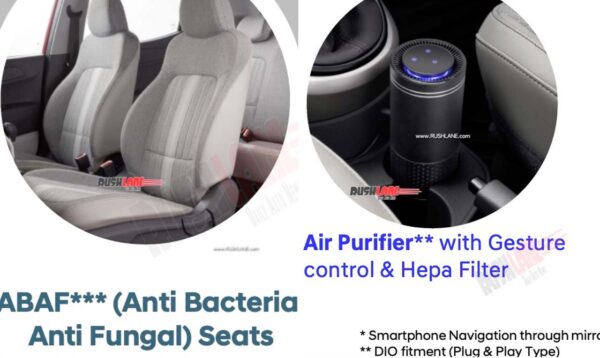 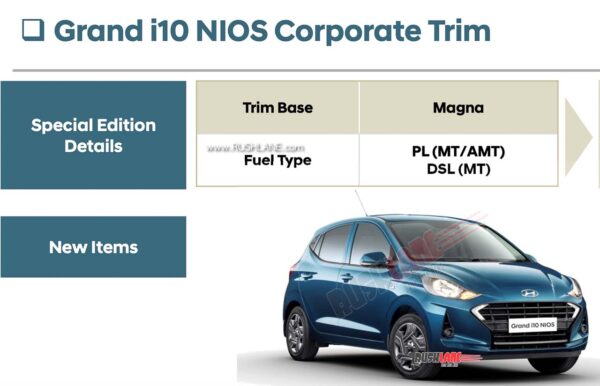 Both these units are expected to come with a 5-speed manual transmission as standard with the option of a 5-speed AMT as an option for the petrol unit. The 1.0-litre turbo GDi petrol engine is not likely to be offered in the Corporate trim.

Prices of this new trim are unknown yet and will be revealed to us at the time of the official launch which is expected to happen soon. The Magna trim in its BS6 form is priced at Rs 5.91-6.44 lakh for the petrol variant and Rs 7.0 lakh for the diesel variant. All prices are ex-sh.