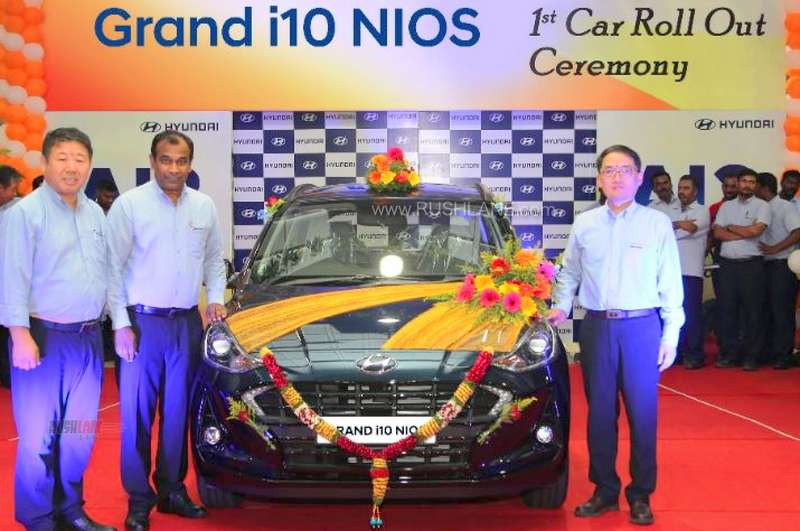 To be launched on 20th August 2019, production of the all new generation Grand i10 NIOS has started in India. Hyundai i10 Grand Nios will be sold in 10 variants and in petrol and diesel engine options. The petrol variants will start from the base Era variant followed by the Magna, Sportz and Asta. Diesel versions will include the Magna, Sportz and Asta. The new i10 Nios will not replace the current model, but will be sold concurrently.

This is the third generation Hyundai Grand i10 which has been renamed Nios which has also been opened for booking at company dealerships at a down payment of Rs.11,000. It carries a name of Nios which means ‘more’ signifying increased dimensions and better interior space. It will be positioned between the i10 and i20 in the company lineup to enter a segment to rival the Maruti Suzuki Swift, Ford Figo and Tata Tiago.

Mr. S S Kim, MD & CEO, Hyundai Motor India Ltd. said, “This is a proud moment for us at Hyundai, with over 2.7 Mn Happy Customers the i10 brand (i10 and GRAND i10) has been one of the most loved hatchback in India. And today we are set to create history again with the Global First – roll out of 3rd Generation GRAND i10 NIOS, which will set new benchmarks in the hatchback segment while creating Brilliant Ownership experience for our customers.”

The engines get mated to 5 speed manual transmission and AMT. The AMT unit could be the same as that seen on the Hyundai Santro. Nios petrol with AMT will be seen on the Magna and Sportz trims while on the diesel engine the AMT will be exclusively offered on the Sportz variant. The petrol manual will offer 20.7 kmpl while the petrol AMT would offer 20.5 kmpl. Diesel manual and AMT would be capable of 26.2 kmpl and 28.4 kmpl respectively.

Interiors get a 7” touchscreen infotainment unit with Apple CarPlay and Android Auto along with a semi digital instrument cluster while safety features include dual airbags, parking sensors, seat belt reminder, ABS and EBD. Prices have not yet been detailed as on date but with the current model priced between Rs.5.0-7.65 lakhs, the Nios could be priced higher by around Rs.50,000.