Before we go further, it is important to note that the scores of Global and Euro NCAP tests cannot be compared directly owing to several differences in the evaluation methods. Suffice it to say that a getting a 3-star rating in Euro-NCAP is significantly more difficult than achieving the same score in Global-NCAP.

Hyundai i10 for Europe

The Hyundai i10 for Europe looks pretty much similar to the Indian Grand i10 Nios but in carries a lot more standard equipment as mandated by the European safety standards. For starters, the compact hatchback tested by Euro-NCAP was equipped with standard front and curtain airbags, seat belt pretensioners and load limiters for both front and rear occupants, Autonomous Emergency Braking (AEB), speed assistance and lane assist system. In comparison, the Grand i10 Nios’s standard safety features include dual front airbags, ABS and front seat belt pretensioners.

In the Global-NCAP crash tests, the India-spec Nios’ structure was rated unstable while the Euro-NCAP rated the Europe-spec model’s structure to be stable under frontal and side impact tests. The hatchback scored 69% in adult occupant safety, 75% in child occupant safety, 52% in pedestrian safety and 59% in the effectiveness of its safety assist systems.

The average performance in adult occupant safety is down to weak driver’s chest protection in frontal off-set crash and poor rating for driver’s abdomen protection during full-width frontal crash. Euro-NCAP has noted that in side impact tests, the overall level of protection to adult and child occupants were mostly good or adequate.

The overall Euro-NCAP rating also takes into account the Hyundai i10’s e-call feature which automatically sends a message to the emergency services in case of an accident. The ratings are valid for Europe-spec Hyundai i10 1.0-liter and 1.2-liter petrol variants 5-door variants which are made in Turkey. 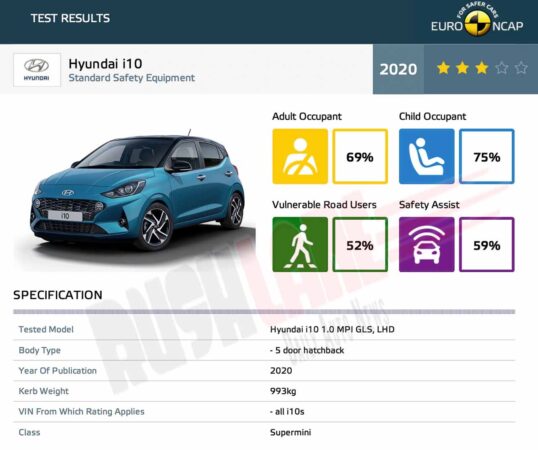 Hyundai i10 vs Grand i10 Nios – Safety levels

As you can see, the Euro-NCAP subjects the vehicles to more types of crash tests in addition to putting the electronic safety assist systems through their paces to evaluate their effectiveness in avoiding or mitigating impacts.

A similar evaluation methodology for the India-spec Hyundai Grand i10 Nios is mostly likely to have yielded less than 2 stars it earned in Global-NCAP test. Overall, there is no denying the that the Europe-spec car is safer than its Indian counterpart.