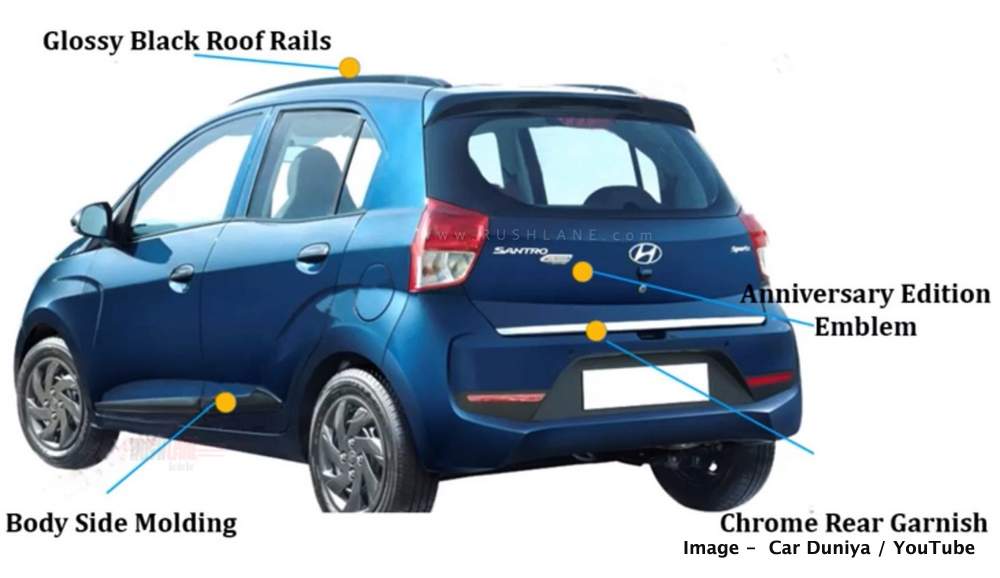 Hyundai India had launched the new generation Santro around the time of 2018 festive season. To mark 1 year of sale in India, the company has introduced a special Anniversary Edition. It gets a total of 9 changes – 7 on the outside and two on the inside.

2019 Hyundai Santro special edition called as the Anniversary Edition gets cosmetic updates and is offered in two variants – Sportz and Sportz AMT. It is priced at Rs 5.12 lakhs and Rs 5.75 lakhs respectively. All prices are ex-sh, Delhi.

The Santro Anniversary Edition comes in at a time when sales of the regular model are on the ebb but the special edition could boost sales to some extent during the current festive season.

Even as the overall design remains unchanged, the Hyundai Santro Anniversary Edition sets itself apart from the regular model with a range of cosmetic updates while engine specifications remain unchanged. The sporty and blacked out colour scheme on the inside also attracts the attention of a younger and sportier segment of buyers in the country.

Hyundai Santro Anniversary Edition gets blacked out door handles, ORVMs and roof rails and Gunmetal Grey colour scheme on its wheel covers. Chrome accents are seen at the rear along with body side molding while there is an Anniversary Edition emblem on its boot lid. The interiors also get updated with the same black colour scheme with Blue coloured inserts. The two colour options include Polar White and a new Aqua Teal while seat fabric design is also new. 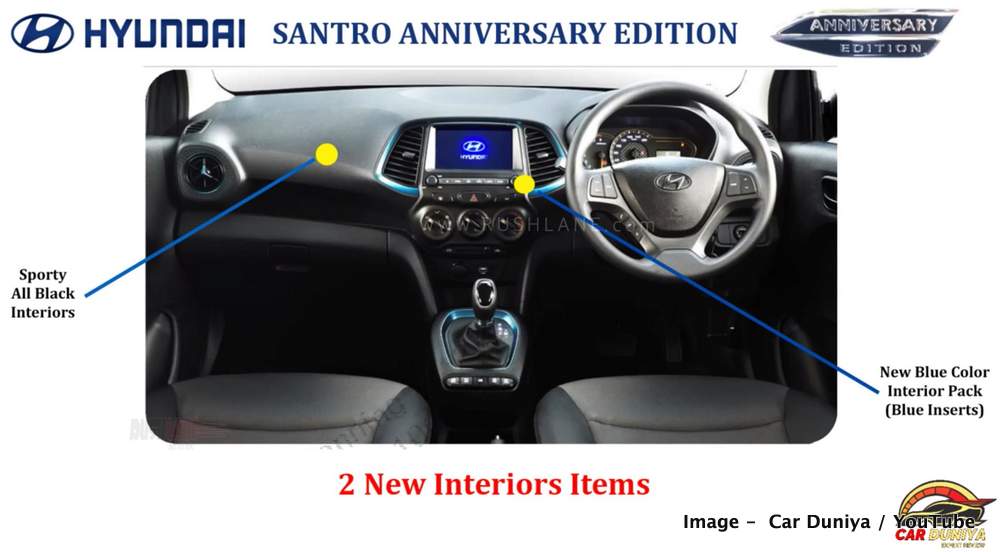 The Hyundai Santro Anniversary Edition continues to be powered by the same 1.1 liter, 4 cylinder petrol engine offering 68 bhp power and 99 Nm torque mated to a 5 speed manual gearbox or AMT.

Where sales of the Hyundai Santro are concerned, sales have dipped over the past few months. Sales in January 2019 stood at 8,000 units dipping gradually over the past months to 3,502 units in September 2019.

To counter these slow sales, Hyundai India introduced special discounts on the Santro in the past month with benefits upto Rs.70,000 along with complementary 1 year extended warranty for the 4th year along with free roadside assistance. This discount includes a cash discount of Rs.30,000, exchange bonus of Rs.20,000, corporate discount of Rs.5,000 and an added exchange bonus of Rs.10,000 for an older Santro or Eon. Hyundai’s small hatchback faces competition from the Maruti Suzuki WagonR, Datsun GO and the Tata Tiago.