Hyundai Santro leading with 2 lakh votes – Followed by i5, Splash, Saneon in Naamkaran

After much speculation, the launch of all-new Hyundai Santro has been officially confirmed to take place on October 23. Codenamed AH2 as on date, Hyundai launched a contest to name their upcoming small car. In this contest, which was open to all, you had to drop in a name of your choice and the one which is suggested by most, will be the name of the car.

As of now, it is the name ‘Santro’ which is leading with over 2 lakh votes. In all, Hyundai has received over 4 lakh votes for the Naamkaran contest. The leading name is Santro, followed by i5, Splash, Saneon. With launch for next month, bookings of the new Santro will open at all Hyundai dealerships in India from 10th October. You can also book the car online. Some dealers have already started taking unofficial bookings, in exchange of advance payment of Rs 10,000. 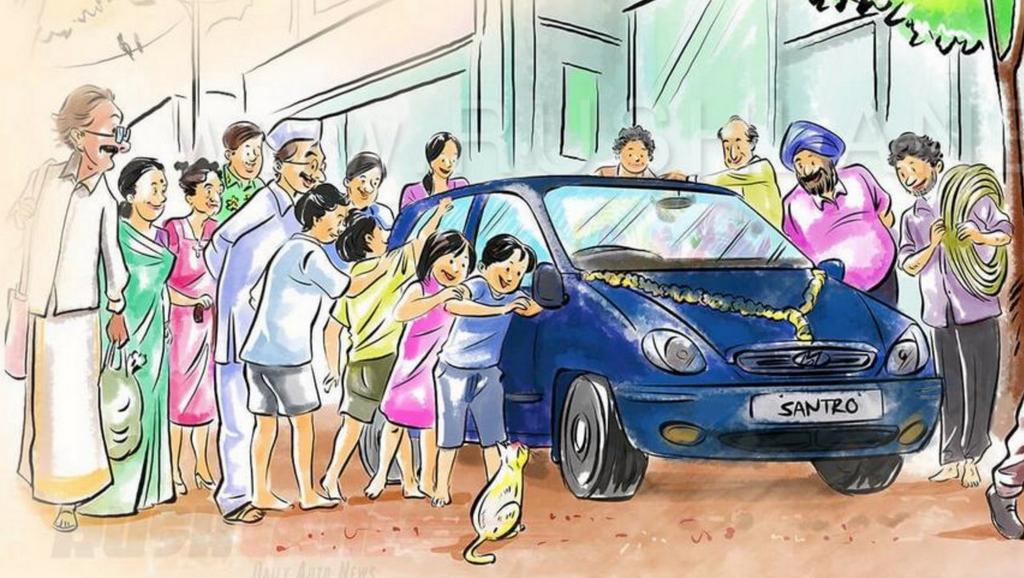 All-new Santro has been spotted several times on test runs and most recently it was seen in ‘Star Dust’ colour. Hyundai already offers this colour option for its other models such as Grand i10, Verna and Creta.

Earlier, Hyundai had released a teaser design sketch of the new Santro, which revealed its tall-boy design. All-new Santro will be bigger than Eon and it is also expected to replace Eon, which has failed to achieve the desired sales figures. Hyundai is hopeful that all-new Santro will help capture the B-segment. New Santro will be positioned below Grand i10 in the company’s line-up and its key external features will include full-face grille, LED DRLs, prominent tail lights, and black inserts in the bumpers.

Interiors will also be upgraded with new premium features such as three-spoke steering wheel with audio mounted controls, touchscreen infotainment system, cabin trim design and dash-mounted gear lever. Security features will include airbags and ABS. All-new Santro will be available in petrol and hybrid variants such as LPG-petrol and CNG-petrol. The petrol variant is likely to have a 1.1 litre engine mated to a 5-speed manual gearbox. A 5-speed automated manual transmission (AMT) option will also be provided to customers.

New Hyundai Santro will be available in the range of Rs 2.5 lakh to 4.5 lakh. It will primarily compete with the likes of Renault Kwid, WagonR, Tata Tiago and higher variants of Maruti Alto. Expect Hyundai to sell atleast 10,000 units of the new Santro in India every month. The sales could be even higher, as the company already sells 10,000 units on average of its more expensive cars like the Grand i10, i20 and the Creta.