Ahead of its much awaited launch in India, the facelifted Toyota Fortuner has now been launched in Indonesia – along with the facelifted Innova Crysta. In Indonesia, the new Fortuner is priced in the range of IDR 504.9 Million (approx Rs 25 lakhs) to IDR 704.5 Million (Rs 35 lakhs).

This is about the same price at which the current Fortuner is available in India. In fact, the Indonesian-spec is a bit cheaper, plus it comes with more features. India-spec Fortuner will also be updated to similar set of features in the coming weeks.

New Toyota Fortuner is being offered in two variants – Legender and Standard. The Legender variant is in a more sportier design with a bolder exterior. It gets sharper dual projector LED headlights, a larger mesh grille in a black colour scheme, redesigned front bumper, new skid plates and 20” alloy wheels finished in dual tones. It also gets blackened ORVMs, LED tail lamps with LED sequential turn indicators and a gloss black roof spoiler.

The Standard Fortuner Facelift receives LED projector headlamps, a revised upper grille, new fog lamp housing and front bumper while it sits on 18” alloy wheels. It however misses out on the LED sequential turn indicators as seen on the Legender. Take a look at all the new features of updated Fortuner in the TVC below.

While exteriors of the two variants are radically different, they see not much difference where their interiors are concerned. The Fortuner Facelift is seen with a larger 9 inch touchscreen infotainment system with Android Auto and Apple CarPlay compatibility, 8 way power adjustable driver and co-driver seating, LED ambient lighting and a 360 degree camera.

However, the Legender does gain some added equipment over the Standard model with an Optron meter with 4.2” MID, wireless charging, ambient lighting and a larger 9” touchscreen infotainment system. 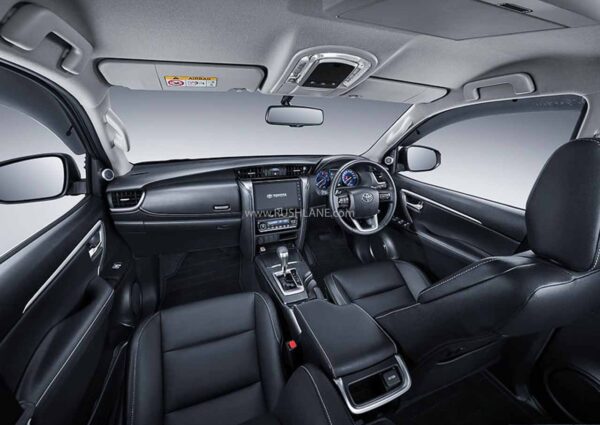 Safety features include Toyota Safety Sense Active safety features comprising of pre-collision system, lane departure warning and dynamic radar cruise control. The new Toyota also gets a total of 7 airbags and is fitted with Fortuner ‘Variable Flow Control‘, which varies steering weight as per the speed.

The International spec Toyota Fortuner Facelift receives updated engines. The 2.4 liter, 4 cylinder diesel engine offers 150 hp power and 400 Nm torque while the 2.8 liter diesel engine now claims output of 204 hp and 500 Nm torque. The engines on the Legender variant get mated to a 6 speed automatic transmission. India-spec Fortuner is expected to be powered by the same set of engine and drivetrain options as seen on the current Fortuner. More details will be revealed in the coming weeks, as the new Fortuner launch date gets closer.