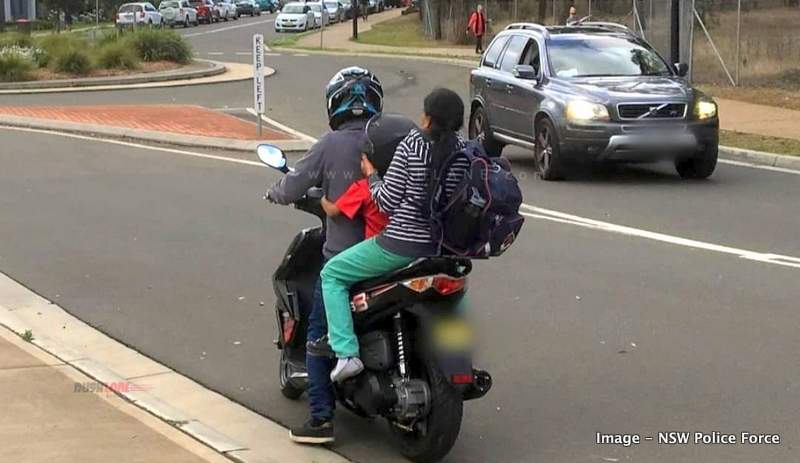 A scooter rider pleaded ignorance to international traffic laws. He had just returned from India and thought he could continue to break regulations as is rampant on Indian roads. However, he found himself with hefty fines after he was apprehended by the Quakers Hill Highway Patrol in New South Wales, Australia.

A 67 year old Indian man, his wife, 59 years old along with his 6 year old grandson were riding on a scooter. Alert citizens who noticed the biker riding triples, notified local cops. Soon he was stopped at Wentworth Street, The Ponds and was found to possess an Indian driver’s license.

He was also breath tested which proved to be negative. His wife was spoken to by the police while the rider was issued with fines for various offences. These included a AUD 344 (Rs. 16,506) fine and 3 demerit points for riding with a passenger who was not wearing a helmet. 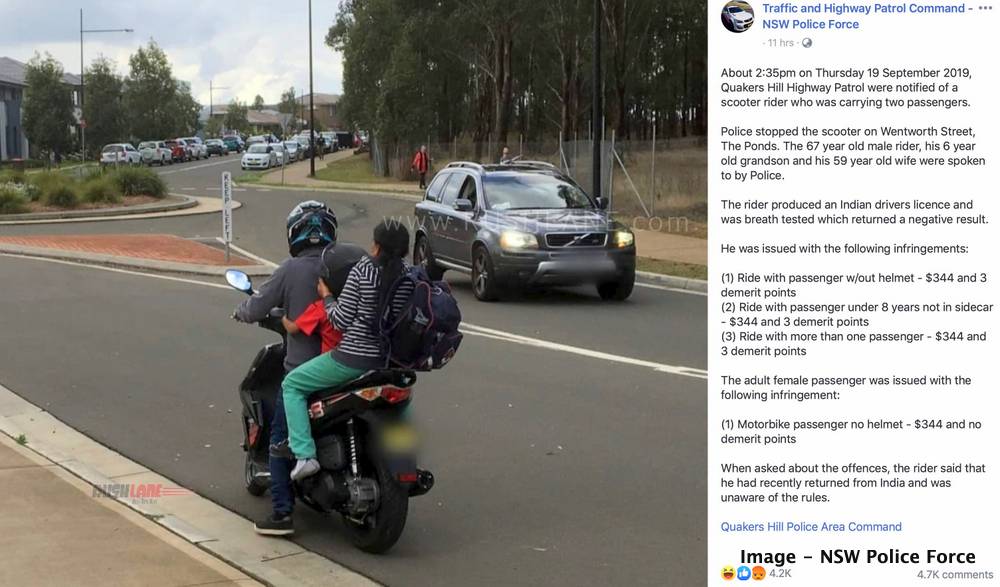 While breaking such laws is a common phenomenon on Indian roads, the rider should have been aware that this would not be tolerated abroad. He even pleaded ignorant of the country’s road regulations and had the audacity to produce an Indian driver’s license when it was asked for.

However, it should be mentioned that now even two and four wheeler riders in India are being fined heavily for breaking traffic regulations, thanks to the high fines introduced in latest amendment of Motor Vehicle Act of India. Probably these new fines, if implemented strictly will bring an end to traffic offences or at least bring them down to a greater extent.

The new Motor Vehicle Act 2019 which came into effect from 1st September 2019 includes a 10,000 fine and/or upto 6 months to 1 year in jail for drunken driving, increased from an earlier Rs.2,000 while repeat offenders will have to pay a higher fine and serve higher jail time.

Driving without insurance can lead to 3 months in jail and fine of Rs.2,000 for first time offenders. The list goes on to fines for no seat belt, no helmets, over loading, talking on mobile phones etc. These stricter penalties are expected to act as a strong deterrent and help in improving road safety.