F Type from the JLR stable graced our shores back in 2013. 2018 has given F Type a much needed refresher both in terms of looks and what lies under its hood. We spend a few days and date nights with this beauty, and that left us beyond smitten, nothing less than a romantic rendezvous.

Offered for the first time ever with a small yet potent 2 litre 300bhp petrol engine from JLR`s Ingenium range, F Type is also available in the SVR spec with 575hp V8 powerhouse, and all wheel drive. 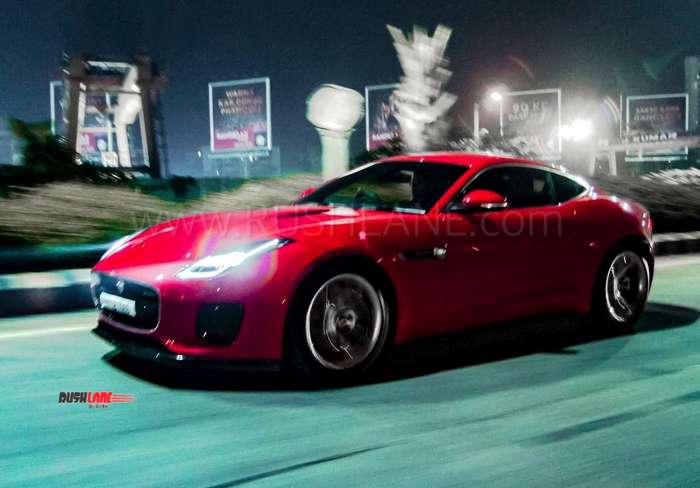 The Design – “Perfection is attained by slow degrees; it requires the hand of time” – Voltaire. This definition of perfection befits F Type`s design, perfectly. There is a sense of simplicity in the sensuousness of the lines that define this coupe. No wonder, the 2018 version has very few, rather no changes to design per se. Just a few minor tweaks, here and there. Vertically split twin air dams have made way for a single unit on the front bumper. The remainder has all been retained. Of course, 2018 version now gets new industry standard LED headlamps. Both changes augment the sleek design of F Type.

The spec tested gets a Bugatti Veyron like single central exhaust with brushed chrome surround and a P300 badge signifying power output. SVR spec gets twin chrome tipped exhausts on either side as a distinguishing factor. 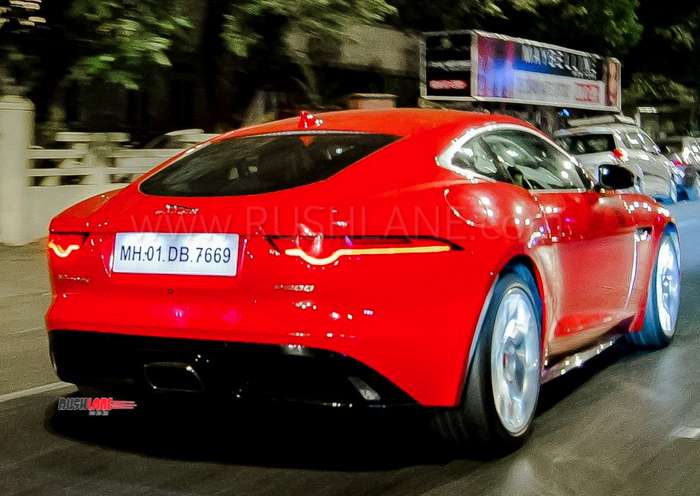 On the inside, F Type hasn’t changed much. Bronze finishing on the start stop button and paddle shifters has been discontinued, and the steering receives a flat bottom treatment complementing its sporty intent. Infotainment system sees an update with InControl Touch Pro, which is inline with the rest of the Jaguar rang. And, oh yes, let’s not miss those cool looking red seatbelt straps.

All said, design-wise, F Type remains a visual enigma, poetry in motion of sorts, something you just can’t enough of.

The Drive experience – Now, before you step into the car, the fact that this car runs a 2 litre 4-cylinder engine might be a bummer but those notions are quickly dispelled once you drive the P300 around. With ever increasing fuel prices, inclination towards smaller turbocharged hybrid engines has started becoming a widespread norm amongst car manufacturers. JLR’s Ingenium series finds its application not only in Jaguar XE and XF, but also powers the RR Evoque and LR Discovery Sport! This little unit delivers some big punches with 296hp, while the V8 version will surely knock you out with its upper cut 543hp. Both specs come with a fast shifting ZF 8-speed automatic transmission.

Thumb the engine start stop button, and the motor wakes up, settling into a muffled purr before you drive away. F Type is devoid of an array of drive modes. Rather it’s a simple automatic transmission with a slap on Dynamic mode to make things a lot more livelier. Modern performance cars are bustling with driving aides and other gubbins that in comparison, P300 feels a bit quaint and vintage in its own way. Make no mistake; emphasis on joy of driving is so much that one doesn’t mind the same as before simple cabin. 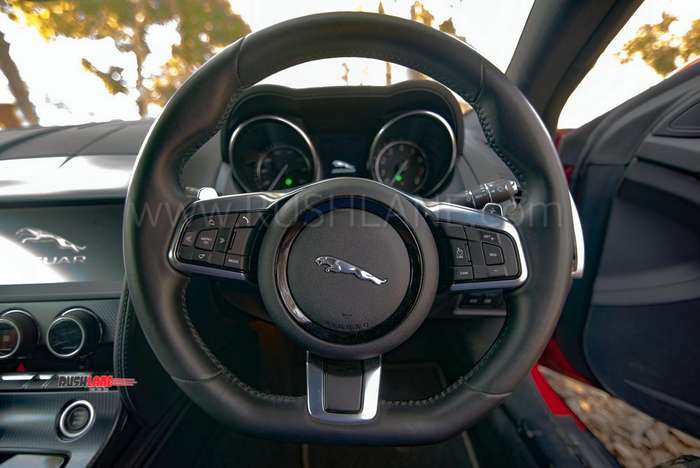 The engine has a different state of tune in this application and even though its turbocharged, it surprisingly lacks the peaky power delivery characteristics of one. Thanks to a flat torque curve, this engine twists out 400Nm between 1500-4500rpm and revs cleanly all the way to its 6500 redline; the quick shifting ZF unit keeps the party going. Nudge it into Manual mode, and the gearbox dwells in the manual mode for a few seconds even after being moved in to the D mode. F Type can dispatch 0-100 clicks in about 6 seconds so, obviously it’s no slouch even if the engine displacement tries to fool you into thinking so. This 2 litre is not the fastest revving but the power delivery is so linear, its more reminiscent of the NA engines. Mash the throttle and the intake sounds are a loud personification of all the air molecules being gasped in and quashed by the turbocharger. The intake surge is quite addictive with a muted exhaust crackle upon lift off.

Switching off Dynamic mode makes the whole experience a bit muted and relaxed. As with any sports car, F Type employs a fast steering rack that can be enjoyed in all glory with the fantastic thick-rimmed flat bottom steering wheel. The wide 245/40 section Pirelli P Zero sit on 19 inch rims and with its wide-track low stance, bestows the mechanical grip on F Type by a big margin. In a true sports car fashion, driving position is low and the experience is further aided by the bucket-like racing seats, which offer brilliant support. F Type also sports an active boot lid spoiler for added downforce, and gets deployed as you go beyond 120kmph. 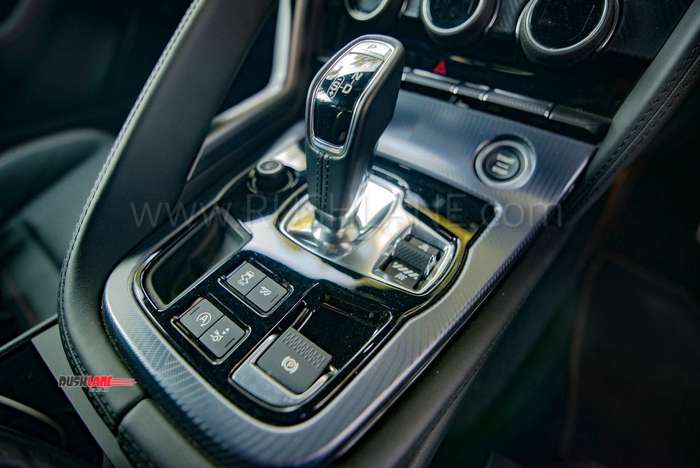 P300 is a stiffly sprung car with understandably very little wheel travel, so, the ride on bumpy broken stretches remains a bit busy, and one has to exercise caution at all times to avoid any teeth clenching moments. On the flipside, give it a serpentine piece of tarmac, and F Type will egg you on, to drive fast. The weighty steering comes into its own as speeds build up and does a great job of conveying what the front axle is up to. We found the brakes on our review vehicle exhibiting a wee bit of fade when hauling it down from triple digit speeds, but that could possibly be due to nearly worn out brake pads. It’s easy to underestimate the engine merely by its specs, but the overall package comes together emphatically, making F Type one of the most engaging cars to drive quick. I for one, would love to drive a 300bhp car fast, rather than driving a 540bhp car cautiously with a constant fear of turning myself into a laughing stock. Stability, handling and braking are on point, and P300 demands to be driven fast.

Now, power numbers are quite objective, but they are rather subjective in the P300’s case. So much so, that they become pretty irrelevant once you start relishing the experience with fearless dollops of throttle inputs. Mind you, P300 will slither around if you are overtly aggressive with the throttle while exiting corners, and will all at once, reward you with controllable power slides too. After a speedy straight line dash, keep tapping on the throttle, and the exhaust crackle and burble, extends for a few more seconds, as you slow down while you are grinning at yourself. The P300 is a fast car that is very easy to drive fast, and it’s a celebration of the leeway the car gives you, and it loves being hooned around. 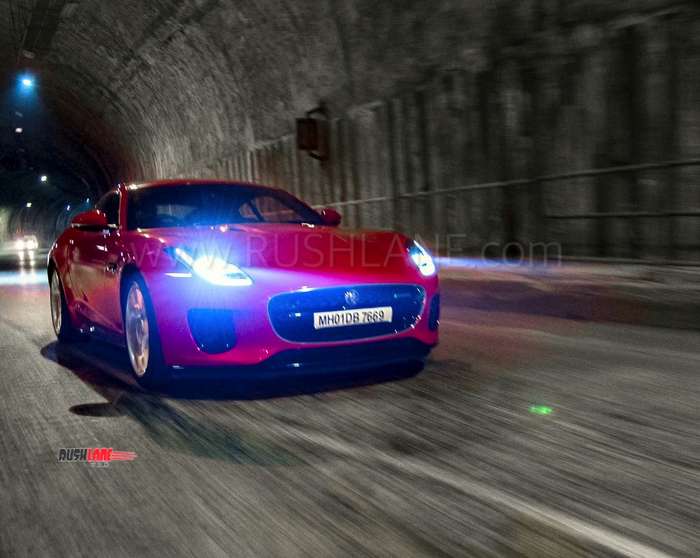 Summing it up – Okay, the exhaust note is a bit of a synthetic symphony than the SVR’s octa orchestra. Yes the engine has lesser number of cylinders and displacement, but with the P300 – less is more. P300 is a full 100kgs lighter than its sibling from the Special Vehicle Operations, which means improved agility, much much better fuel economy (if you care), and not to mention lower costs. We feel that’s an amazing bargain.

Each F Type variant on offer can be had in either a Coupe or a Cabriolet body style, with the latter commanding slightly more premium in each case. F Type P300 takes on the Porsche 718 Cayman, the Boxster and the Audi TT. Its a close call when it comes to drive experience, but when it comes to design, F Type simply obliterates the competition. One thing we got used to when driving this thing around was a sight of passers by whipping out their cell phones. “Woah Jag!!”