After years of waiting, today is the day, Jawa fans and enthusiasts have been waiting for. Mahindra’s Classic Legends will officially reveal the new Jawa motorcycle at an exclusive event in Mumbai. We will bring you LIVE updates from the event via our social media platforms.

Ahead of official debut, new set of images of what is being called as the Jawa 300 Classic, has been leaked on the internet. These new photos were shot when the test rider was testing the bike for high speed runs on the highway. It clearly shows the riding position of the rider. From the images, it shows an upright riding position. Also known as the standard riding position, this style of riding position is considered the best – as it offers maximum rider comfort. 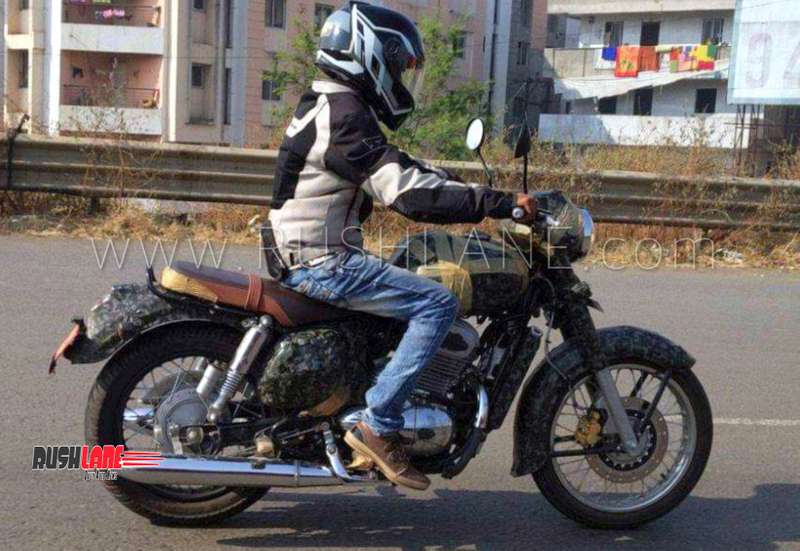 Speaking about features, the new Jawa 300 Classic has rounded headlight, teardrop tank, flat seat and spoke wheels. Rival to Royal Enfield Classic 350, it has sculpted bodywork, but Jawa 300 appears a lot bulkier. However, that’s part of the retro look, so true-blue Jawa fans won’t be complaining. Other features that emanate the retro look include round mirrors, round indicators, telescopic fork and extensive use of chrome accents.

Jawa 300 utilizes a 293cc liquid cooled single cylinder engine that delivers max power of 27 hp and max torque of 28 Nm. Engine is mated to a 6-speed gearbox. The engine has been developed jointly by Mahindra’s R&D centre in Pune and its technical centre in Varese, Italy. It’s an entirely new engine and is BS-VI compliant.

Suspension system on Jawa 300 comprises telescopic front forks and twin gas charged suspension system at the rear. Wheels used are 17-inch spoke wheels fitted with tube type tyres. This again accentuates the motorcycle’s retro look. Braking power to front wheels is provided by disc brakes whereas drum brakes are installed on rear wheels. This is why all variants of Jawa 300 will have single channel ABS, which will be offered as standard.

Jawa 300 could sport a price tag of Rs 1.5 lakh (ex-showroom), which closely matches the price of its primary rival. Royal Enfield Classic 350 is available from Rs 1.39 lakh to Rs 1.62 lakh (ex-showroom). UPDATE – Jawa is launched in India. Below are official photos.