This modified Jawa comes with raised ground clearance as well

Ever since they were launched in November 2018, we have seen multiple customization projects done on the Jawa motorcycles. In this latest mod job, a stock Jawa 42 has been modified into a scrambler. A number of changes have been carried out to enhance the retro look. While several stock components have been removed, the bike gets a range of customized and aftermarket parts.

In other changes, the stock round reflector strip on the rear fender has been replaced with a rectangular shaped unit. The grab rail has been removed completely. At the front, rear view mirrors have been removed and aftermarket tank pads have been added for enhanced comfort. 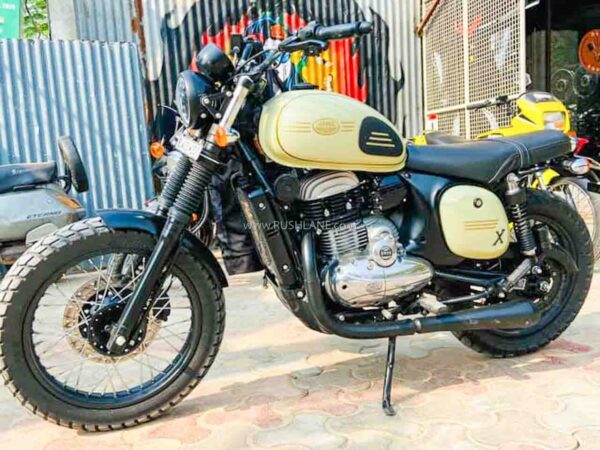 The colour of the stock bike used in this customization project is Lumos Lime (Matte) and most of it has been retained. Only exception is the front fender, which now sports a black shade. The wheels, exhaust pipe and front and rear suspension have also received the blacked-out treatment. The customizations have been done at a Delhi-based workshop and total cost to owner was Rs 30k. Owner of the motorcycle is Vinay Dhankar.

There are no changes to the engine in this customization project. Jawa 42 is powered by a 293 cc liquid cooled, single cylinder engine that churns out 26.51 ps of max power and 27.05 Nm of max torque. This is mated to a constant mesh 6-speed gearbox. The bike utilizes a double cradle frame integrated with telescopic fork at the front and gas canister type twin shock absorber at the rear. 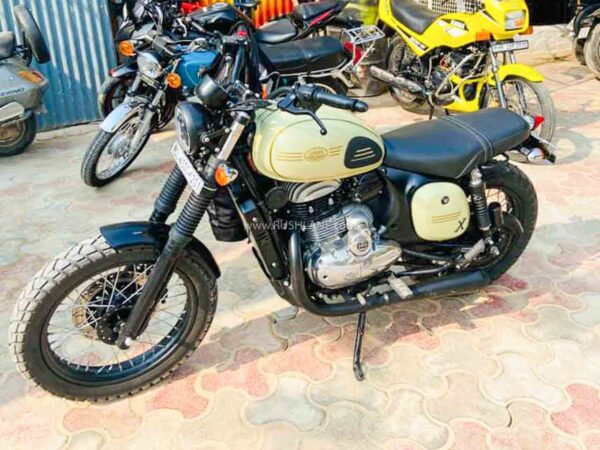 Braking duties are performed by 280 mm disc at the front and 153 mm drum brake at the rear. Customers have the option to choose 240 mm rear disc brakes with floating calliper and ABS. Single-channel ABS is offered as standard.

Jawa motorcycles may have undergone a challenging phase due to delayed deliveries, but things are looking up for the company in recent months. BS6 models were launched in March and deliveries had begun post the lockdown period in June.

Even though its sales are still low as compared to rivals, Jawa’s popularity appears to be gaining traction. Jawa has also listed its 300 cc motorcycle on its European website at a price of €6k (Rs 5.23L). This will be manufactured in India and exported to European countries.