Handling charges have been described as illegal in multiple court orders of different states. Even Supreme Court has stated that they should not be levied. But in spite of this, car and bike dealers continue to levy the same on their customers.

An aggrieved customer of the Jawa Classic Dual ABS variant took to Twitter to air his grievances at an astronomical quotation received from a company dealership. This issue has now been resolved after the buyer tagged the CEO on Twitter. 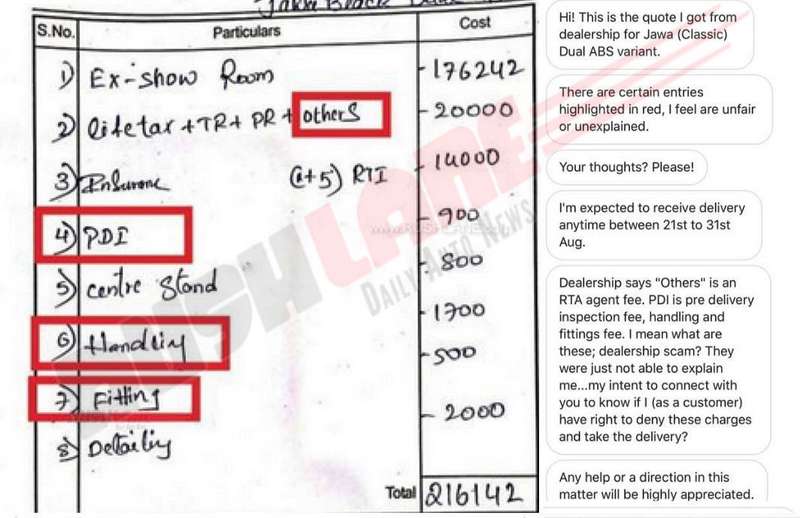 The buyer, on receiving this quotation was astounded and highlighted the discrepancies in red to show off, what in his opinion, was unfair pricing. He cited that each of these highlighted charges were uncalled for and only added at the dealership level to jack up the price. It also promised delivery between 21st to 31st August.

On questioning the dealership on these ‘Other’ charges he was told that these were RTO agent fees. PDI fees, stood for pre delivery inspection fee. Unconvinced at these unnecessary charges, the buyer wrote to Jawa and took to Twitter tagging the CEO.

This action was immediately noted and he received a conference call from the RGM of Jawa in South India and the MD who removed the additional handing and other charges to mark the final quotation down to Rs.2,07,336. This is a reduction of almost Rs 9k in the on-road price. 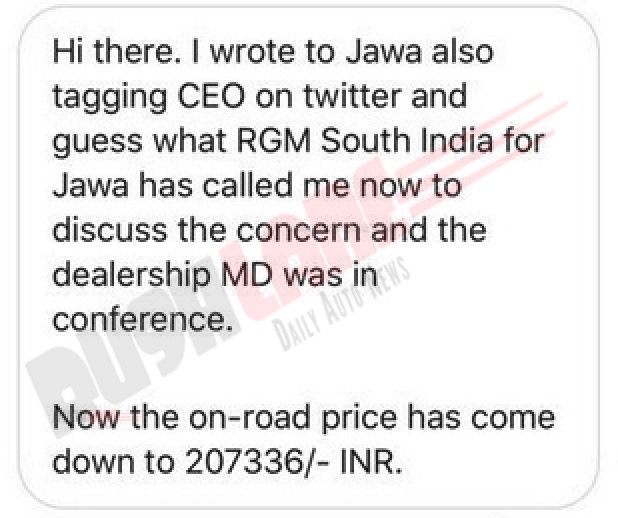 Jawa has also been in the news for delayed deliveries. Buyers have been complaining of unprecedented delays and the company has recently introduced a Delivery Estimator on the company website. This is expected to provide customers with the latest information on delivery status of their Jawa bikes.

This Delivery Estimator is available to those customers who had booked the motorcycles on or before December 25, 2018 and does not show delivery estimates for bookings made after this date. It also does not work for those who have booked the Jawa motorcycle at a dealership.