Jawa Forty Two having recently made it re-entry into India after a gap of two decades is efficiently priced, well equipped and is the company’s most affordable model in India right now, with a price tag of Rs 1.55 lakh. 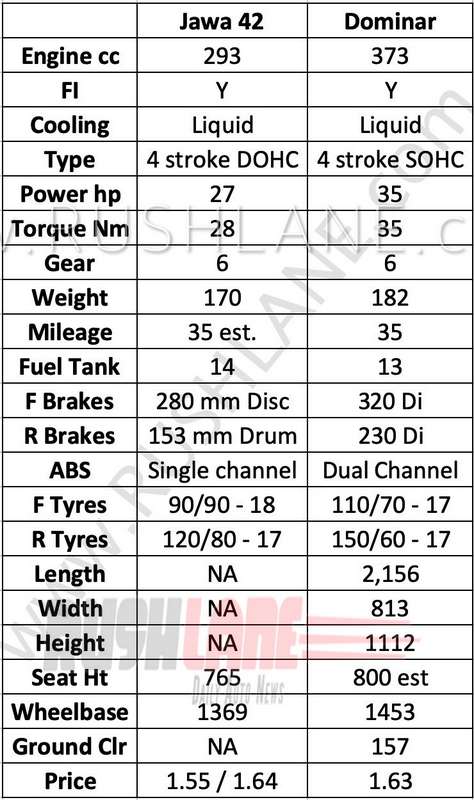 Bajaj Dominar 400 is inspired by power cruisers such as the Ducati Diavel. It is the company’s flagship product. The Dominar 400 was the first motorcycle to be sold in India with LED headlamp. Its onboard features include a sculpted fuel tank, stretched wheelbase and dual digital consoles all of which combine to give it an aggressive look. Bajaj Dominar 400 color options are Rock Matte Black, Canyon Red and Glacier Blue. With these differences in overall features, the Jawa Forty Two and Bajaj Dominar 400 appeal to starkly different kinds of buyers with the Jawa appealing to those who prefer a retro style and the Dominar appealing to a younger segment of buyers in the country.

Engine specifications: Jawa Forty Two engine has been developed from the ground up through collaboration between the group’s R&D centre in Pune and technical centre in Varese, Italy. It is powered by a new 293cc, single cylinder, liquid cooled, DOHC engine offering 27 bhp power and 28 Nm torque mated to a 6 speed transmission. The Bajaj Dominar 400 on the other hand gets a bigger displacement and more powerful engine with a 373cc, triple spark, 4 valve, DTS-I, liquid cooled engine offering 34.5 bhp power and 35 Nm torque and is also mated to a 6 speed transmission.

Conclusion: Who should buy what? The answer is simple. If you want old school bike, go with the Jawa 42. Yes, the bike is old school, but make no mistake, as its heart is as modern as it can get. It is made to have fun trips. On the other hand, if you want a power cruiser, modern looking bike with more features, Bajaj Dominar is for you.