RUSHLANEDAILY AUTO NEWS
HomeBike NewsJawa green colour registration denied by RTO as it is similar to...

As per the official website, Jawa 42 is on offer in six colours. The first colour listed under Jawa 42, is the Galactic Green shade. When the colour was first announced, many wondered whether this will be legal or not. The reason, India has banned use of Army Green (Olive Green) colour for use in civilian vehicles. The colour can only be used by Army vehicles.

The RTO officer has written a letter to the dealer, who delivered the Jawa green colour motorcycle, M/S Classic Motors, Kalamassery. In the letter dated 16th July 2019, the RTO Officer states that, “On inspection of the vehicle, at the time of permanent registration, the authority realized that the vehicle is with the colour of Olive Green, which is against the existing Motor Vehicles Rule.” 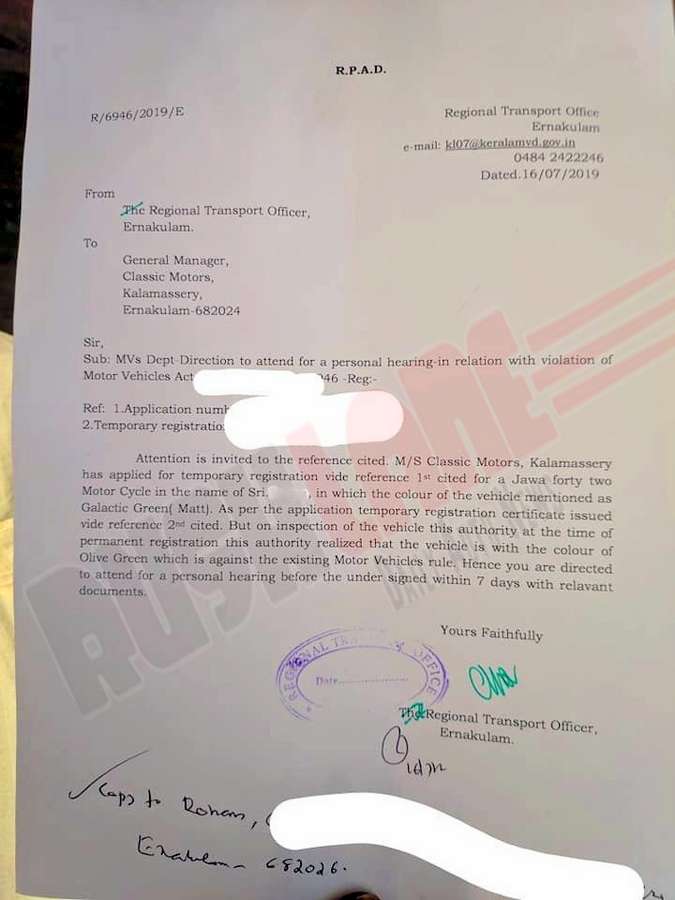 “Hence you are directed to attend for a personal hearing before the under signed within 7 days with relevant documents.” added the RTO officer in the letter.

The dealer shared the letter with the owner of the Jawa green colour. The owner of the motorcycle then contacted Ashish Joshi, CEO, Classic Legends, the company which has brought Jawa Motorcycles in India this time.

As per the photo shared, Ashish replied that this is a one-off problem. “Should not be the case. Bikes are being registered all over the country. Am looking into it and will come back to you soon.”

Next day, Ashish replied, “We have met the RTO and are addressing his problem. To be honest, he wanted a bike delivered without waiting for it and we reused. Hence he is trying to create hassle. In the next 2-3 days all documents pertaining to colour will be handed over so that he cannot hassle our customers or us again.”

It remains to be seen whether the RTO officer allows registration for the Jawa green colour or not. We will update the story once there is an update.