Almost a year ago, two Mysore lads set out on a 8,000 kms journey, on bicycles. They started from India’s southernmost tip – Kanyakumari, their destination – Roof of the World – Leh, Ladakh, which is a good 4,000 kms away from the starting point. And if this was not enough, these guys got back on their cycles and started pedaling back home, all the way to Mysore.

Krishna Vasudeva Rao, achieved this memorable feat last year. On his journey, he was accompanied by Krishna Chaudhari for the Kanyakumari to Kashmir leg, whereas Ashvin Gururaj joined the duo from Chandigarh and cycled all the way back to Mysore with Krishna Rao. They have now created a documentary on the life changing experiences encountered by them during the journey.

In an interview, Krishna stated, “It has been a dream come true. The expedition helped me understand my nation better, our people and their cultures, which I would have missed if traveled in a high-speed vehicle. It is not a tough task if one has the will to do it.” 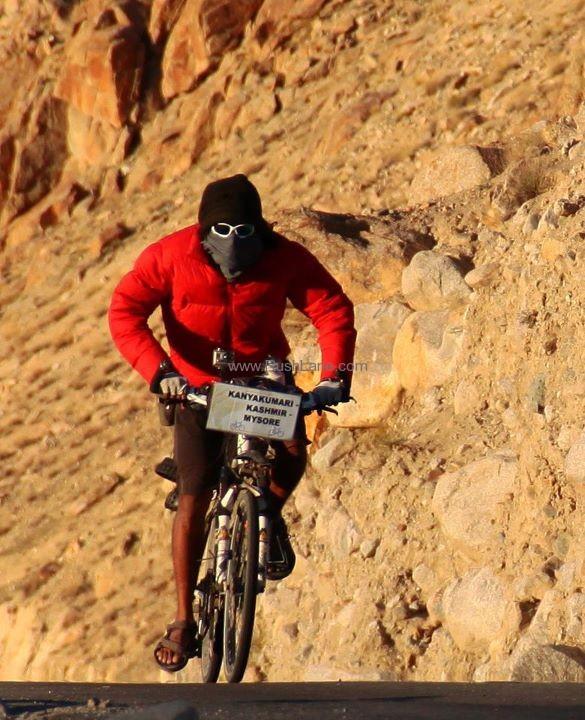 Talking more about the journey, Krishna Vasudeva added, “We had to reduce our luggage weight comprising tent, food, clothes to 40 kg from 50 kg. Our racing cycle speed which crosses 60-70 km on a plane road reduced to 40 km. The route to Khardung La pass was arduous. A landslide happened about two kilometers away from our place. That was the loudest noise I ever heard in my life.”

When asked about what they were eating while cycling, the duo replied, “We used to have lots of tender coconut, besides having dry fruits, milk products with regular food.” Krishna Vasudeva has been a figure of inspiration to his friends along with whom he goes for long cycling rides on a regular basis. One of Krishna’s cycling friend, Ramya adds, “Krishna has inspired almost a dozen of his friends to cycle every day. We practice on long routes.”

Krishna Rao, along with his friend, has now created a documentary called – Odyssey India, which you can watch in the video below.

The number of people cycling all the way to Khardung La, Leh is increasing every year. Krishna and his friends are a figure of inspiration to those of us who want to cycle to Leh. In an informal interview, Krishna was grateful enough to answer questions regarding Odyssey India, cycling, life and much more. Read on. 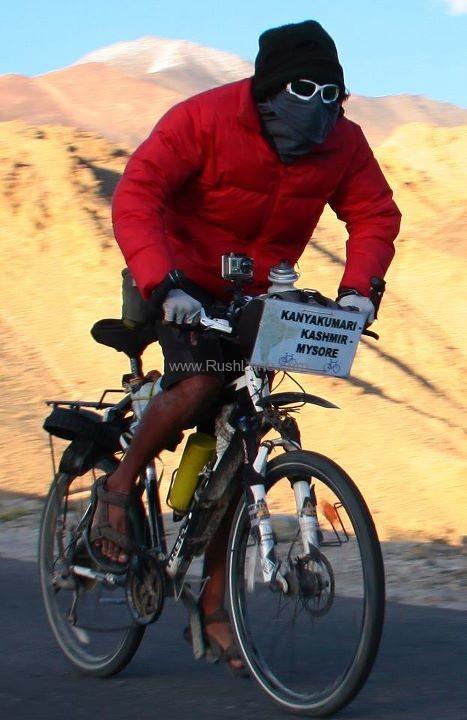 What prompted you to create Odyssey India?

During the tour, there were sights that were unforgettable, awe inspiring, shocking and yet, very homely and familiar. People who made it worthwhile to go on living, traveling, and exploring, to go on tirelessly in search of more such people. There were things that happened that I can’t explain at all. Some things, I’d rather not explain for they have to be experienced. And quite a lot of things that plain explanation wouldn’t suffice. For those moments which needed a visual cue, and for those words that needed an original voice, shooting videos was the best option.

I shot the videos with my brother during the trip without knowing what I would do with it. I had my daily journal which I used to make notes and inferences, but other than that, there was no plan on making a documentary. After getting back home, we found it quite difficult to narrate experiences from a 111 days trip. Though words can be powerful, supplementing them with visuals and audio paints a better picture.

I could have, instead, just updated my blog and it would have been a fairly good read (I hope). But it doesn’t reach out to the masses so easily. I love reading and writing, but it’s not the norm these days. A book reaches a community, generally has an age restriction and a language barrier. Although we used English as the narration language, the movie is still watchable by all age groups and the idea of the movie can be inferred just by the visuals too.

Most importantly, people have lesser and lesser time to spare. A movie gets done in one session and quicker than another medium. So packing all these reasons, came the documentary.

From when have you been cycling?

I have been cycling since the age of five, like most of the kids around the world.

What cycles do you own currently?

Which cycle you used during Odyssey?

Were your parents/guardians always supportive?

Yes. There was not even an aorta of doubt in my parent’s support and understanding. I was not like this all my life, and neither were my parents. But as I showed interest in experimenting with lifestyles, my parents opened up too and let me find my own way.

They were not persistent towards the more socially accepted way of life, nor were they inclined towards me following the herd. Without their support, this endeavor would have been way more difficult to take up.

How has Odyssey changed your life?

In my little experience of the world, of living life as a human, learning has been an integral part of everyday life. Not a day goes by without change. There is a part that dies with yesterday and a part that is born tomorrow. The concept of ‘Today’ has always been and will be a transitional one. One that reflects life as a whole.

However, it is always wise to shift perspectives often to see the bigger picture. And that is where the bicycle tour comes along. Traveling through India, I learnt a lot about the country, it’s people, the natural beauty that recognizes no concept like ‘Country’ or ‘Government’, the culture and it’s sub-cultures, the basic nature of man, and the love for one’s homeland.

I learnt about myself, the spirit of struggle, the pursuit of happiness, and the undying element that invisibly guides us all.

If I have to take the time period of 111 days and answer how it has changed my life, here are the main lines:

Lead by example. If you wish to change the world, start with yourself first (Not my words, of course) You are a part of the world. And only by example, can you change.

Learn first hand. Go out, do things you’ve never done before. Feed the mind with variety, feed the body with variety. Experience the seasons first hand. Talk to strangers, socialize with people whom you otherwise do not consider. In short, get real, put yourself into interesting situations. There’s one right outside the door.

Lastly, love, laughter, happiness, creativity, strength and peace are natural and native states of mind. Anything else is only temporary.

What is it that you want to do next?

I work in Mysore as a bicycle mechanic and a Yoga instructor. Developing my career is what I am doing at the moment.

Educational qualification? Are you planning on studying further?

I have completed my Bachelors in Business Management from Mysore University. That was two years ago.
I have no plans of studying further as of now.

To read Krishna Vasudeva’s personal blog, click here. Here he explains how difficult it was to prepare for Odyssey. From what gear you need to what you need to eat, everything is explained in detail.

The following image shows daily routine followed by Krishna and his friends prior to Odyssey.

Krishna is still cycling and wishes to cycle all his life. Krishna signs off saying, “Anybody can achieve this feat if they put their mind into it. Age, gender and all does not matter.”