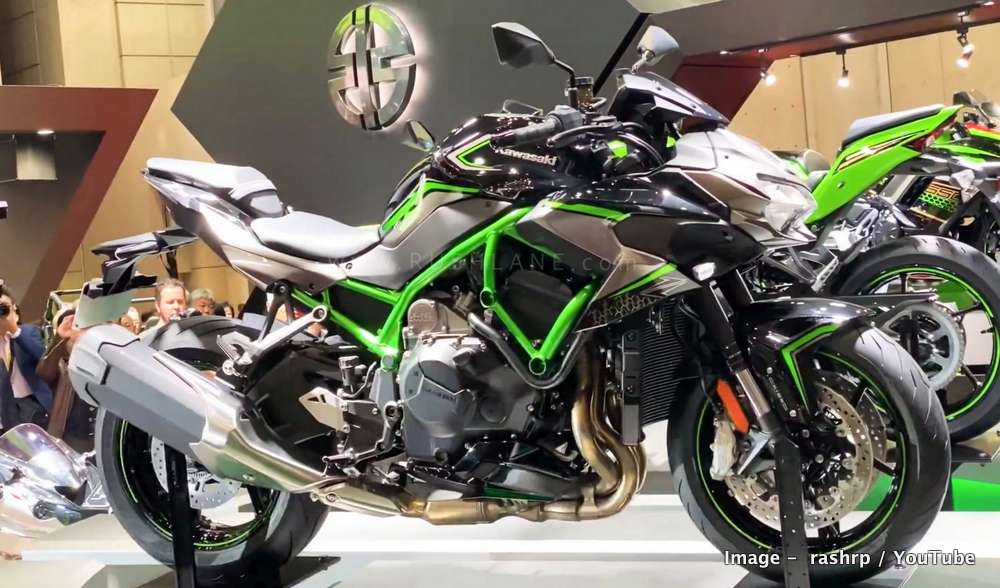 The crazy liter-class super naked segment has gotten a very serious contender. The Kawasaki Z H2 is now probably the meanest street fighter on the planet. The supercharged motorcycle has been unveiled today, at the Tokyo Motor Show.

As the name suggests, the Kawasaki Z H2 is essentially a street fighter version of the super aggressive Ninja H2. The naked superbike looks just as menacing as its fully faired sibling if not more.

The LED lighting signature and the headlamp fairing conforms with the Z design language but every element is more expressive and aerodynamic. The windshield is larger than what we are normally used to on a naked bike but then given the speeds this machine is capable of it is a good idea. Watch the first look walkaround video below.

Expected to be launched in India soon, the fuel tank looks roughly the same size as the one on Ninja H2 but finer details and contours are tweaked to align with the naked Z family. Also, the fuel filler cap is new. Other noteworthy observations include a flat handlebar and fully digital instrument console (Ninja has digi-analog unit).

The tailpiece with split seats resembles that of the Z 1000. Only a part of the exhaust canister is visible but we expect the system to feature two vertically stacked units. Another interesting fact is that the naked ZH2 is heavier than the fully faired H2 by 1 kgs. Kerb wt of ZH2 is 239 kgs.

The Z H2 will be employing the same 998 cc inline four-cylinder engine which get’s its load of induced air from a supercharger. On board the Ninja H2, this insane motor is tuned to deliver 210 hp and 142 Nm of torque. But on the ZH2, this motor will deliver 200 PS and 137 Nm.

If you chuck caution to the wind and keep the throttle wrung, the motorcycle can hit a top speed of 300 kmph. The unrestricted R variant (not street legal) can push beyond 400 kmph!

The Kawasaki Z H2 is expected to receive a slightly different state of tune to suit its personality but it will continue to be a monstrous piece of equipment. Competition will come from the likes of KTM 1290 Super Duke and the upcoming Ducati Streetfighter V4.