Kawasaki ZX25R made its debut at the 2019 Tokyo Motor Show in October last year – First country where the bike is launched, is Indonesia

A 250 cc, in-line 4 cylinder motorcycle, which delivers a mind-boggling 51 PS power at 15,500 rpm and 22.9 Nm torque at 14,500 rpm – meet the new Kawasaki ZX-25R. Now officially launched and can be purchased at a Kawasaki dealership in Indonesia. Unfortunately, it is only on sale in Indonesia. But the good news is that, the ZX25R will soon be launched in many more countries.

The two wheeler world took notice when Kawasaki first announced this motorcycle, and has been waiting with bated breath for its launch. Not that this is something the world has not seen before. Ofcourse there have been 250cc i4 motorcycles in the past, like the Yamaha FZR250, Suzuki GSX-R250, Kawasaki ZXR250 and more recently, the Honda CBR250RR.

Design inspired from the elder sibling Ninja 400, ZX25R is made in the same Kawasaki plant, where they manufacture their flagship Ninja H2 and H2R. Prices start from IDR 96,000,000 (Rs 5 lakhs) for the base variant, which does not get ABS. Top variant with ABS is priced from IDR 112,900,000 (Rs 5.9 lakhs). Apart from ABS, the more expensive ZX25R variant also gets the dual tone livery. A total of four colour options are on offer – lime green, black, blue/black and white/black. Mono tone colours are for the base variant. 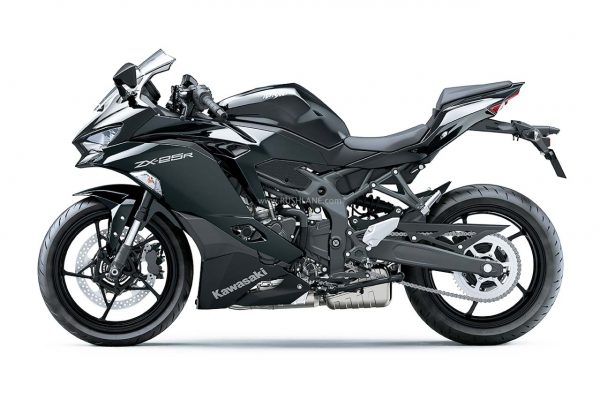 Some of the top features on offer with ZX25R are assist & slipper clutch, economical riding indicator, electronic throttle valves, quick shifter, traction control, power modes, ABS, USD forks in front, horizontal backlink rear suspension with spring reload adjustability, etc. Braking is via single 310 mm disc in the front and single 220 mm disc at the rear. Dual ABS is on offer, but only with top trim.

Though the max power is delivered at 15,500 rpm, Kawasaki has revealed that this engine can be revved all the way to 17,000 rpm and above. The same they had shown in their official video, which also revealed the exhaust note of this machine.

Speaking about India launch of Kawasaki ZX-25R, until now there has been no official word about its launch. Kawasaki India is currently focusing more on introducing motorcycles with higher localization content. But at the same time, they have also launched CBU motorcycles from time to time. Will the ZX25R be launched in India, only time will tell.