Kia Seltos Crashes Out Of Dealer Showroom – Nosedives On The Road

2020. Nuff said. Well, if you were wondering what else, here’s a Kia Seltos leaving the building. Yet again. This isn’t the first time a Kia Seltos nosedived in similar fashion. Then there was the Kia Carnival which had crashed into a wall during delivery.

This better not become a yearly tradition. An expensive one at that. All said and done, there’s going to be some decisions to be made regarding how to proceed from here. Namely, all things pertaining to insurance.

Not to mention, no one messes with the badass. And we all know Seltos is badass by design. There are no details available as to who was behind the wheel and if any messing around went on, but the car sure looked decked for delivery. Which as of now is a failed delivery.

And in going over, it took off a chunk of the wall facade. Unsurprisingly, the fallen one managed to garner a fair bit of attention looking at the large group of people who’ve gathered around to get a glimpse. All in all, sure looks like a major crowd puller, fallen or not. 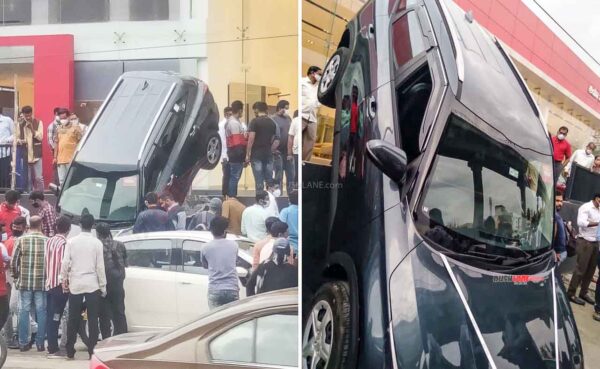 For the manufacturer, Kia Seltos is a sockdolager of a car that’s helped in growth oriented brand building. And while there’s been a flurry of online chatter regarding Global NCAP’s 3 star rating for Seltos, it would be naive to think the rating will have consequence, if any. Previous gen Creta has a 4 star safety rating.

Last month, Kia Motors India reported its highest monthly wholesales since setting up shop here. At 21k units, this number is good enough to have Kia sail into the legion of top three manufacturers in the country.

All this for what is a fledgeling company in India is remarkable. But of course that’s just on paper. In operations, Kia is globally popular, and in India it’s functionality is in conjunction with Hyundai, a manufacturer that already enjoys pride of place here.

In fact, Hyundai Creta and Kia Seltos enjoy segment dominance convincingly. If one were to step back for a moment and grasp just how strong Hyundai and Kia Motors recent performance has been, it portends a strong tale success. Hyundai has already outlined it’s focus on UVs, and the introduction of Kia, and its lineup, further helps develop and grow segments Hyundai forecasts growth for.

This festive season, the Kia Seltos Anniversary edition is being retailed at a premium price. It celebrates a full year of sales in India. To ensure a hasslefree ownership experience, Kia Motors India has already introduced a range of service packages that outline specific requirements for streamlined selection by customers.