Kia is set to enter the Sub 4 meter market with a similar bang, as they did with the Seltos

In about a few days’ time, Kia Sonet will be the latest entrant in the sub-4 metre compact segment. To be launched on 18th Sep, bookings of this new car opened last month. And as per Kia, the response if nothing less than amazing.

Kia Sonet has already managed to create a positive buzz around it ever since it was officially revealed last month. With most of its details out, we can safely say that it will be setting new benchmarks in the segment. In the last post, we discussed its how Sonet has been loaded with features that are seen in its more expensive sibling, the Seltos.

Most of the features on offer with the Sonet, are first in this segment. If the stunning new design, powerful engine options or technology is not enough to convince you; Kia has on offer official list of accessories to modify the Sonet legally. Sonet in its stock form itself undoubtedly looks one of the finest in its segment, however, with accessories, Kia aims to make Sonet look more attractive. 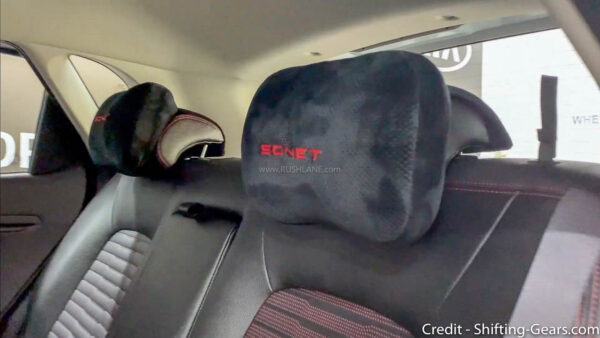 Kia Sonet accessories list contains elements such as chrome finish faux vents at either side panels and gloss black faux vents at the hood. It also gets chrome embellishments at many places including the fog lamp cluster, above the side claddings, tail lamp housing, door handles, ORVMs and many more. The metal plates on door sidestep accentuate the its appeal.

Occasional black inserts like the one above the fog lamp housing, the side door cladding, above the front and rear bumpers and rear fender also enhance the sportiness and a nice contrast to the tons of chrome present around. More accessories are expected to be revealed after the official launch. Take a look at the Kia Sonet GT Line variant, modified with official accessories in the walkaround video below.

Sonet is based upon the same platform as its Korean cousin Hyundai Venue. It will even share the same sets of powertrain and transmission options offered in Venue. The engine options consist of a 1.2-litre naturally aspirated petrol engine, a 1.5-litre diesel engine and a 1.0-litre Turbo GDi petrol engine. Transmission options include a 5-speed manual, a 6-speed manual, a 7-speed DCT automatic and the newly introduced 6-speed iMT.

Like its elder sibling Seltos- the Sonet will be offered in two trim lines- Tech and GT. The latter will cater to people who wish to have a fun experience behind the steering wheel. It will also sport some visual updates to distinguish itself from the Tech Line. The GT Line will be offered in either the 1.5-litre diesel unit or the 1.0-litre turbo petrol unit. The 1.5-litre unit can only be availed in the Tech line.