After Seltos and Carnival, Kia will be launching its third product, Sonet compact SUV, in Sep 2020. The company is hopeful that Sonet will be just as successful as Seltos in the Indian market as the Seltos. Seltos is now among the top selling SUV and it has helped Kia to become one of the largest carmaker in the country.

Kia has already sold more than 1 lakh cars in India. Of these, more than 50,000 were equipped with connected car technology. Kia is the fastest car brand to achieve 1 lakh sales in the history of India’s automotive industry.

Sonet could help Kia boost sales further and close the gap with market leaders Maruti Suzuki and Hyundai. After making its debut earlier this month, Sonet continues to be on test. Recently it was spotted parked on the side of the road, near Bangalore airport, without any disguise. Images are credit to automotive enthusiast Harish Vishwakarma. 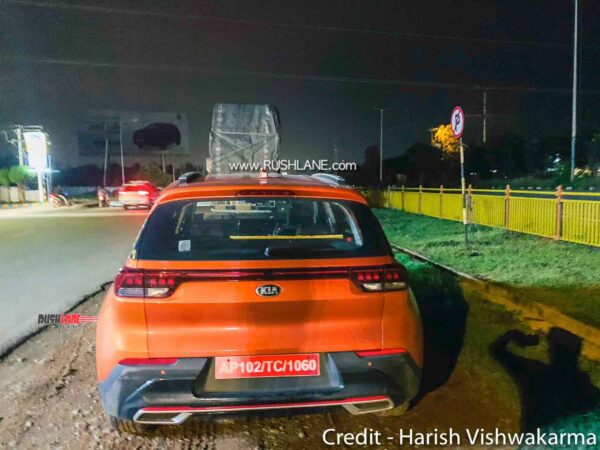 On the inside, Sonet will be borrowing a lot its features and components from Seltos. For example, both cars share the same 10.25-inch touchscreen infotainment system with support for Apple CarPlay and Android Auto. Other commonalities include soft leather touch steering wheel, climate controls and wireless charging system.

Petrol engine options for Sonet have been borrowed from Hyundai Venue. While the 1.2-litre Kappa petrol churns out 83ps / 115 Nm, the 1.0-litre turbo petrol can make 120ps / 172 Nm. Sonet diesel variant will get the 1.5-litre unit from Seltos, which is capable of generating 115 ps and 250 Nm. Depending on the engine option, transmission option of 5 MT, 6 MT, iMT and 7-speed dual clutch automatic is on offer.

With Sonet, Kia will be taking the battle directly to market leader Maruti Suzuki. Sonet’s primary rival will be Maruti Brezza, even though initially it will have to compete against all other SUVs in this segment such as Ford EcoSport, Tata Nexon, and Mahindra XUV300. Brezza being the top-selling compact SUV and having retained that position for a long time, there are speculations whether Sonet could be a giant slayer. To be manufactured at Kia’s Anantapur plant in Andhra Pradesh, Sonet is likely to be priced at around Rs 7-12 lakh.