South Korean automaker Kia Motors has been testing its all-new sub-four-metre subcompact crossover or “compact SUV” for quite some time. Over the months, we have shared multiple images and videos of the Kia Sonet doing test runs across the country. Kia Motors India will debut it globally on August 7. Plans were a bit delayed due to COVID-19 and the initial nationwide lockdown protocols.

Kia Motors India currently has two products in its portfolio: Seltos compact crossover and Carnival minivan. The Kia Seltos was updated a couple of months before for the 2020 model year while the next-gen Kia Carnival witnessed its online unveiling recently. Kia has made a strong statement on our market with just two products and this success story is expected to continue with the all-new Sonet.

Today, Kia India has released 4 new sketches, 2 revealing the exterior design and 2 revealing interior design of the Sonet SUV. Speaking about the design, Karim Habib, Senior Vice President and Head of Kia Global Design at Kia Motors Corporation, said, “We are extremely excited to introduce the new Kia Sonet to the world, a compact SUV with a strong and muscular character found only in much larger vehicles. With this in mind, we have designed this SUV with a uniquely sporty attitude, a confident stance and a dynamic silhouette. Its uncompromising attention to detail and selection of colors and materials could have only be inspired by the great cultural heritage that our designers found all over India.” 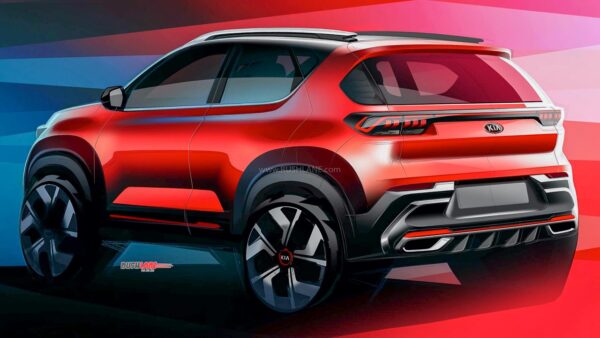 “We believe the Kia Sonet’s compelling character will hold major appeal for young, aspirational and always-connected customers in India and beyond,” he added. Top of the line Sonet variant will be loaded with features. Taking center stage is its high-tech digital display and instrument cluster, featuring a first-in-segment 10.25-inch HD touchscreen and navigation system with UVO Connected technologies. The Sonet will also offer drivers steering wheel-mounted controls, and the ability to select different drive and traction modes. Air vents in the dashboard feature a metallic, diamond-knurled pattern, a chic and stylish design highlight. 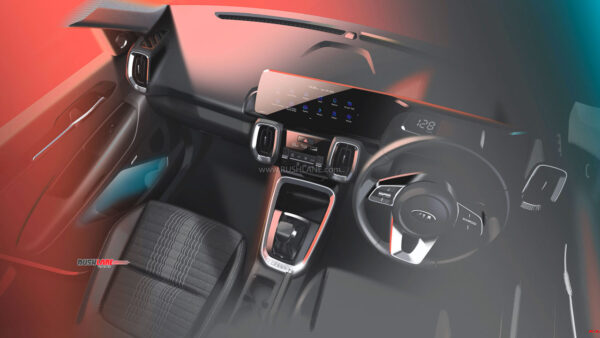 In addition to these transmission choices, the Kia Sonet will also receive the revolutionary iMT (intelligent Manual Transmission) system. The technology has already hit out market via the new Hyundai Venue Sport variant (also available in select trims of regular variant) which carries a starting price tag of Rs 8.31 lakh ex-showroom. iMT basically removes the clutch pedal without making the vehicle a conventional automatic — know more.

Automotive YouTube channel The Car Guide – Rishabh Arora has shared a few interior shots of a Kia Sonet test mule. Considering the extreme lack of modern-day equipment such as a touchscreen, it is safe to assume that the vehicle was in its base trim (or maybe just a basic shell to test out some internal components). In place of a reasonably-sized touchscreen panel sits a simple audio unit with a small B&W display.

Just below, a manual climate control unit rests. Its blower speed reading is illuminated. Finally comes the semi-digital instrument console complete with an analogue meter on each side. The central portion has a large digital readout (in a calculator font) alongside a basic MID unit. One can also catch a glimpse of the three-spoke steering wheel loaded with several controls. We think this could have been a make-do fitment since the general basicness of the dashboard does not suggest the requirement of steering-mounted controls.