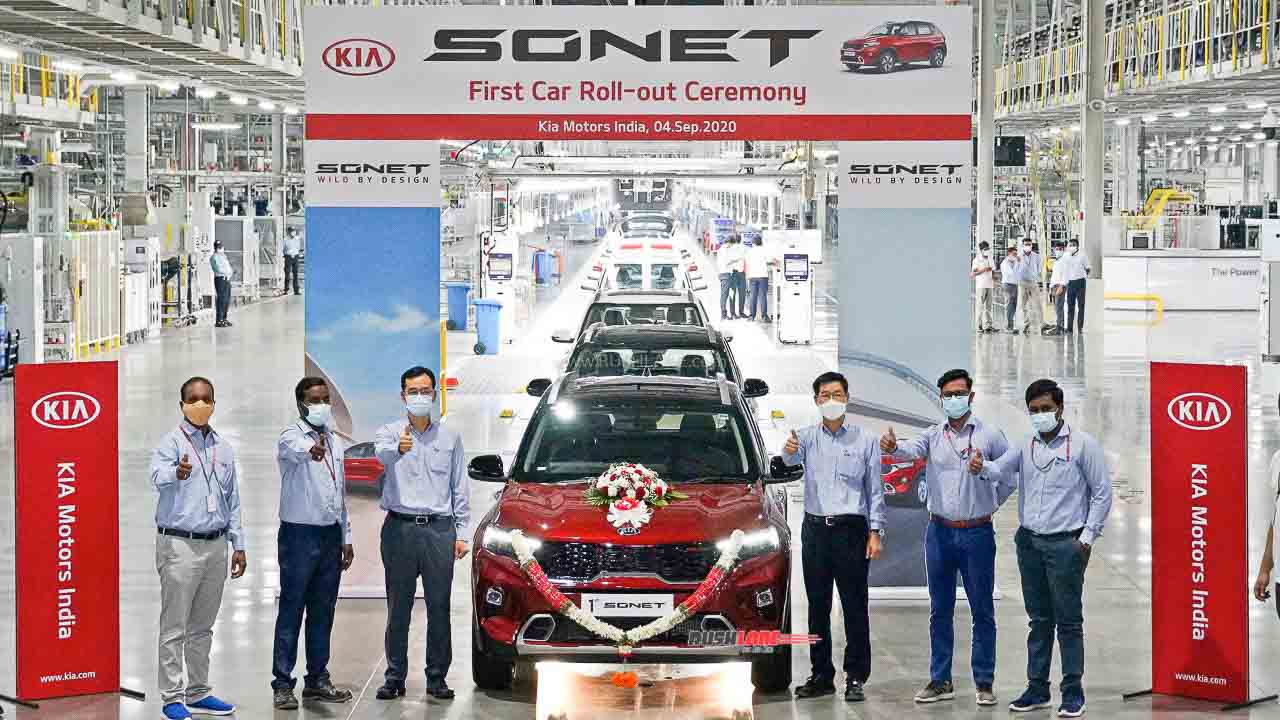 Ahead of launch on 18th Sep, Kia India rolled out the first ever Sonet SUV today, on 4th Sep 2020

Unveiled earlier last month, Kia Sonet is scheduled for launch on 18th September. Today, marks the start of production of Sonet in India. The photo of Sonet you see in this post, is the first ever Sonet that has been produced in the world. It rolled out of Kia India plant located in Anantpur, Andhra Pradesh.

Sonet has received tremendous response from customers, as bookings were more than 6.5k on first day itself. It will be interesting to see how rivals like Maruti Suzuki Vitara Brezza, Tata Nexon, Mahindra XUV300 and Ford EcoSport take on this new challenger in the compact SUV space. Sonet is likely to impact sales of its sibling Hyundai Venue as well.

Mr. Kookhyun Shim, MD and CEO at Kia Motors India said, “Today is a momentous day for Kia Motors India, as we officially roll-out the first Kia Sonet customer car. It is a matter of great pride that we have been able to stay true to our promise of ‘The Power to Surprise’ and bring in Sonet in time, despite the unprecedent challenges the world is facing today. Kia Sonet is the symbol of promise and commitment of Kia to the Indian market and a testament to the passion and dedication of the employees at our state-of-the-art Anantapur plant who have worked relentlessly to ensure uninterrupted development of the new Sonet.”

“Mass production of the Sonet in India has been initiated after testing the vehicle for over 100,000 kilometers in different climatic conditions and some of the most challenging terrains in India. After the massive success of the World Premiere held last month, Kia Motors is preparing to launch the Sonet in India on September 18, 2020. With this roll-out, Kia is looking at building India as the export hub for the Sonet to cater to the demand of over 70 markets globally.”

For the battle ahead, Kia has done well by equipping Sonet with a long list of features. The SUV is bound to emerge as the unmistakable head-turner on the streets with its striking looks, muscular build and aggressive design. Some of the key features include Kia’s signature tiger nose grille, crown jewel LED headlamps, heartbeat LED DRL and LED tail lamps, electric sunroof, crystal cut alloy wheels, and sporty dual muffler design. Body colour options include eight monotone and three dual-tone colours.

Of these, the best mileage of 24.1 kmpl is offered by the 1.5 litre diesel variant with manual transmission. Other variants have mileage of around 18 to 19 kmpl. In terms of acceleration, the fastest is the 1.0 litre turbo petrol with 7DCT variant. It can reach 0 to 100 kmph in 11.3 seconds. Not far behind is the 1.5 litre diesel automatic that can touch 100 kmph in 11.8 seconds.