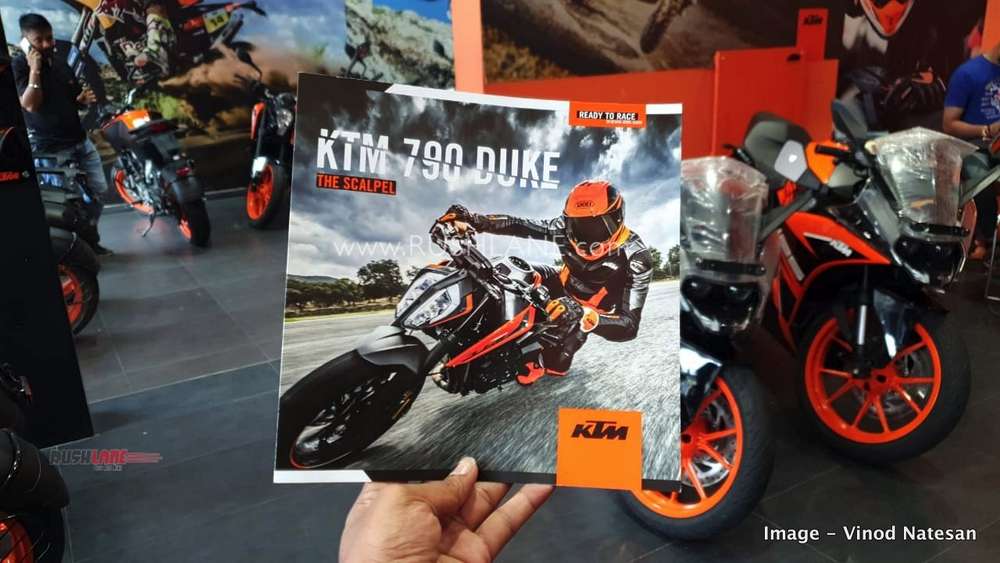 As bookings open for the new KTM 790 Duke at company dealerships ahead of official launch, various details of this India spec model have come to the fore. Hat tip to automotive enthusiast Vinod Natesan for sharing the video and photos.

KTM 790 Duke is a middle weight, sport naked bike which will be launched in India soon. It has already been seen at a Mumbai dealership. Brochure and specs too have been leaked. A notable feature was the inclusion of a saree guard which is mandatory for all bikes on sale in the country.

Positioned on a new light weight chassis, the KTM 790 Duke gets better rigidity. It commands compact dimensions relating to better turn in and lean angles. Watch the video from Mumbai dealership below, which also reveals the exhaust note.

Its on board features include full LED lights with LED DRLs, a customized handlebar, fully digital instrument console with Bluetooth allowing access to both calls and messages along with music via the switchgear. Rider aids on the 790 Duke will include Track Mode, Motorcycle Traction Control, Quickshifter Plus, Motor Slip Regulation, SuperMoto Mode and Motorcycle Stability Control.

Engine specifications on the KTM 790 Duke will include a 799cc, parallel twin, liquid cooled engine offering 105 hp power at 9,000 rpm and 87 Nm torque at 8,000 rpm mated to a 6 speed transmission with a two-way quick shifter.

Suspension is via 43mm USD in the front and monoshock at the rear while it will get a Bosch ABS system with cornering ABS. This engine will be BS IV compliant when launched, but will be upgraded to BS VI emission norms prior to the 1st April 2020 deadline.

No prices have been revealed as on date but estimates put the KTM 790 Duke at around Rs.8.5 lakhs since it will come into the country as a CBU. Once launched, the KTM 790 Duke will compete with the Suzuki GSX-S750 and Kawasaki Z900, both of which are priced lower at Rs. 7.52 lakhs and Rs. 7.69 lakhs respectively. It will also take on the Triumph Street Triple RS and Ducati Monster 821, MV Agusta Brutale 800 and the Ducati Monster 797.