KTM Duke 125 is the new motorcycle in the Duke lineup. It is also the most affordable motorcycle among the Duke siblings, which consist of Duke 200, 250 and 390. Ever since launch in Nov 2018, it has seen outstanding sales performance. It has managed to deliver an average sales of 1,424 units per month since Nov 2018

In Dec 2018, which was also its first full month of sales, it managed to become the best selling Duke, by registering sales of 2,414 units. In doing so, it replaced the Duke 200, which has been the best selling KTM motorcycle in India for many years now. 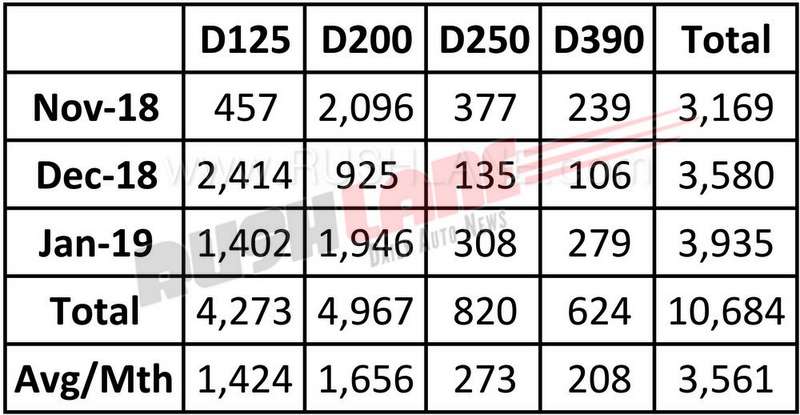 One of the most powerful bikes in its segment, the Duke 125 is powered by a 124.7 cc, single cylinder engine offering 14.5 bhp power at 9,250 rpm and 12 Nm torque at 8,000 rpm mated to a 6 speed gearbox. It gets ABS as a standard feature and braking via a 300mm disc in front and 230mm disc at the rear. Suspension is via 43mm upside down front forks and 10 step adjustable monoshock at the rear. KTM Duke 125 is produced at the Bajaj Auto plant along with its other Duke and RC siblings.