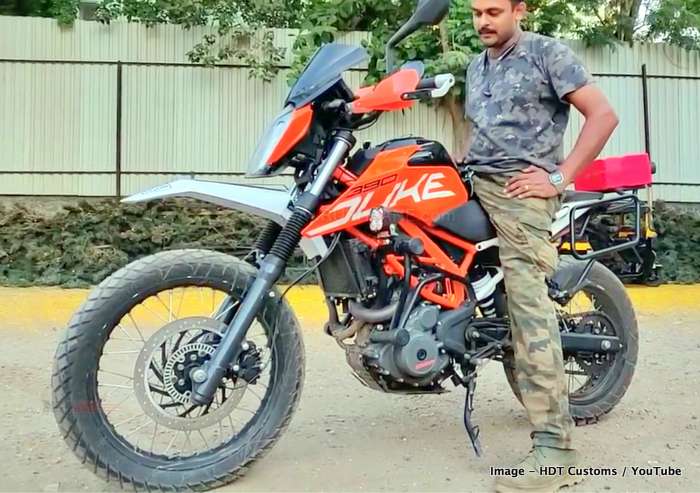 With multiple prototype spotting across Europe and India, KTM has been testing the patience of enthusiasts who have been eagerly waiting for the 390 Adventure. Some prospective customers have decided to end the wait by commissioning their own versions of the adventure tourer which are fashioned out of the Duke 390.

This particular example which has been executed by Mumbai-based HDT customs not only looks the part but is also capable of doing some interesting things off the road. The most significant modification (also the most challenging one) is the replacement of the Duke 390’s highly acclaimed WP inverted front telescopic fork with the long-travel unit from the Royal Enfield Himalayan. The rear monoshock has also been raised proportionately to give the motorcycle a proper adventure tourer stance.

The custom motorcycle sits on spoke wheels that are wrapped in dual-purpose tyres. This warrants re-calibration of ABS which has been taken care of. Further modifications include a high-mounted front mud-guard, a compact visor, LED foglights on either side of the fuel tank, raised handlebar.

It also gets knuckle guards, and mounts to install panniers and rear luggage box. The motorcycle also features a stubby side exhaust canister to improve ground clearance and water wading ability (the throaty exhaust note is an added advantage).

Rest of the motorcycle continues with stock configuration. The 373 cc single-cylinder liquid-cooled engine pumps out 44 hp and 35 Nm of torque in its stock avatar, and comes paired with a 6-speed gearbox. The braking system with front and rear discs (with dual-channel ABS) has been retained as well. Video is credit to HDT Customs channel on YouTube.

The custom KTM 390 Adventure took four months and INR 1.5 lakhs to build. That is quite a lot of money considering that the Duke 390 retails at INR 2.48 lakhs (ex-showroom, Delhi). The authentic 390 Adventure which is slated to make its world premiere later this year is estimated to be priced around INR 2.75 lakhs (ex-showroom). So, we would strongly recommend you to extend your patience and wait for it.