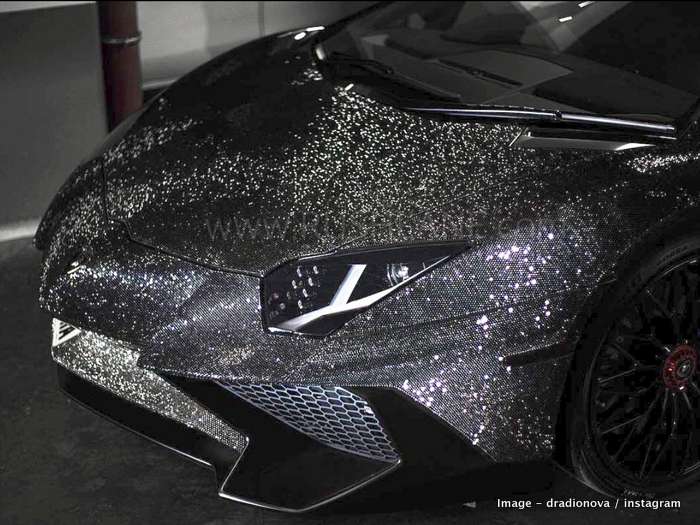 Russian Instagram celebrity and model Daria Radionova has turned everyone’s head by decorating her Lamborghini Aventador SV in Swarovski crystals. Radionova not only has a fine taste in luxury cars, but she has a fetish for Swarovski Crystals and likes to see them all over her luxury vehicles.

Each time round the number of Swarovski crystals on the cars she buys keeps increasing. Her earlier Lamborghini Huracan was covered in 1.3 million Swarovski crystals (red). She also has a previous gen Mercedes Benz CLS that was also given the Swarovski treatment with 1 million crystals.

This time round she has an Aventador SV with 2 million Swarovski crystals stuck all over its exteriors. It also has the ‘SV’ logo on the rear quarter panel done up in crystals while it also sports a customized number plate “DAR IIA finishing off its bold new look.

The process of adding the crystals onto the Lamborghini Aventador SV took 700 man hours and each one was applied by hand and has added several hundred kilograms to the supercar’s ultralight carbon frame. The once matte black Lamborgini, but now a sparkling example, rolled off the truck and was surrounded by other super luxury cars which included a stock Aventador SV, a Porche 911 GT2 RS and a Carrera GT.

The glistening Lamborghini Aventador SV which was presented in London supercar parade this week is modified by London based bureau, Cars in Cloaks, who described their creation as – “If Bruce Wayne was a girl this would be his car”. It was these same Russian designers that gave a Swarovski crystal finish to the Mercedes-Benz CLS and Lamborghini Huracan.

Daria Radionova took to Instagram to show off her Swarovski crystal encased Lamborghini Aventador SV to her 128k followers. However, not all of her followers were impressed by this display. Some followers commented that could London not be shut down for a more worthy cause such as poverty or suffering or climate change or to offer medical support to sick children? Others commented that this extravagant expense could have fed an entire village for a year. Well, one cannot impress everybody!! Below are more photos of her Black shining new car, and her previous Red car as well.