Lewis Hamilton is probably enjoying his off-season time on a high after the British racer equalled F1 legend Michael Schumacher’s tally of seven world championships in 2020. Not only that but he has also set a new record for 95 wins in F1 races. Now, Hamilton is looking to drive a few impressively fast cars in his off time.

One of them being the latest prototype of his company’s latest hypercar- Mercedes AMG One. As per reports, Hamilton is helping provide finishing touches to Mercedes’ ambitious hybrid hypercar project. In a marketing video, Lewis Hamilton is shown gearing up for testing the AMG One after completing his daily work.

Usually in his free time, Hamilton usually likes to take a Mercedes A-Class diesel for a spin, however, the AMG One hypercar is totally a different experience altogether. With a total of 1000 horses available on tap, this is truly the most powerful road car to wear the German marque’s three-pointed star. The point of attraction here is a 1.6-litre V6 engine that powered the Mercedes F1 W06 Hybrid race car which won the championship in 2015.

However, unlike the racecar, the One’s powertrain is rather much more sophisticated. In the F1 car, the turbocharged V6 motor is paired to a motor-generator driving the rear wheels plus a second motor installed at the turbocharger.

Whereas in AMG One there are two additional electric motors one driving each axle. Therefore, this One effectively gets an all-wheel-drive setup. Its battery pack is also large enough to provide an electric-only range.

The push-rod suspension setup and sophisticated aerodynamics on its exterior have been designed using knowledge of F1. However, unlike F1 W06 Hybrid race car, this engine is not likely to rev up to 11,000 rpm due to lack of high octane fuel in most gas stations. Its characteristic design features a flat front end with large air intakes, a fish-like fin on top and a muscular rear with its active aero-elements. 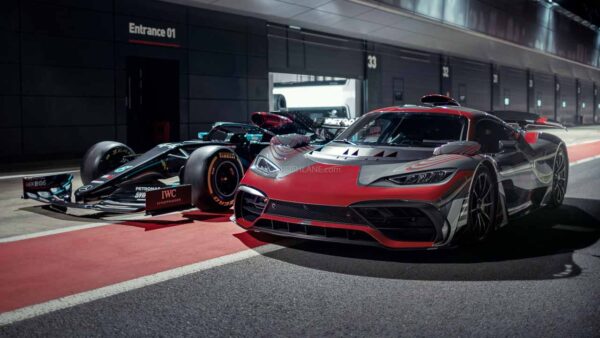 Hamilton unveiled a concept version of AMG One at the 2017 Frankfurt International Motor Show. The production-spec model was due for a launch in 2019 but seems that there are quite a few hurdles to overhaul for Mercedes engineers since it is proving hard for the said engine to perform on a road car’s body. One of the major concerts for the Mercedes team was to start the V6 engine to start and idle like any normal car.

That 1000 bhp is critical in producing a performance set to burn the tracks of Nurburgring. It can clock a top speed exceeding 217 mph (350 km/h) with a 0-60 kmph sprint in flat 3.0 seconds and a 0-124 kmph in just 6.0 seconds. The fastest lap record by a production car is held by AMG GT Black series car with a lap timing of 6:43:61. In coming days, we will get to know how fast the new AMG One hypercar is, in comparison to its predecessor.