It’s raining good news for bikers. In the space of few weeks, there have been series of interesting development in the two wheeler segment, especially in the 300 cc segment.

First BMW India announced launch date of G310R and G310GS. Then Bajaj confirmed KTM 390 Adventure for India. And now, joining the party is Mahindra. Anand Mahindra has confirmed on Twitter. Jawa Motorcycles will be launched in India this year, in 2018.

Mahindra are expected to launch new Jawa branded motorcycle in India sometime by Diwali 2018. This bike is currently under development and production is set to commence from the Mahindra plant in Pithampur, Madhya Pradesh.

Mahindra owns rights to sell Jawa brand of motorcycles both in India and South East Asian countries and local production will make these bikes more affordable. 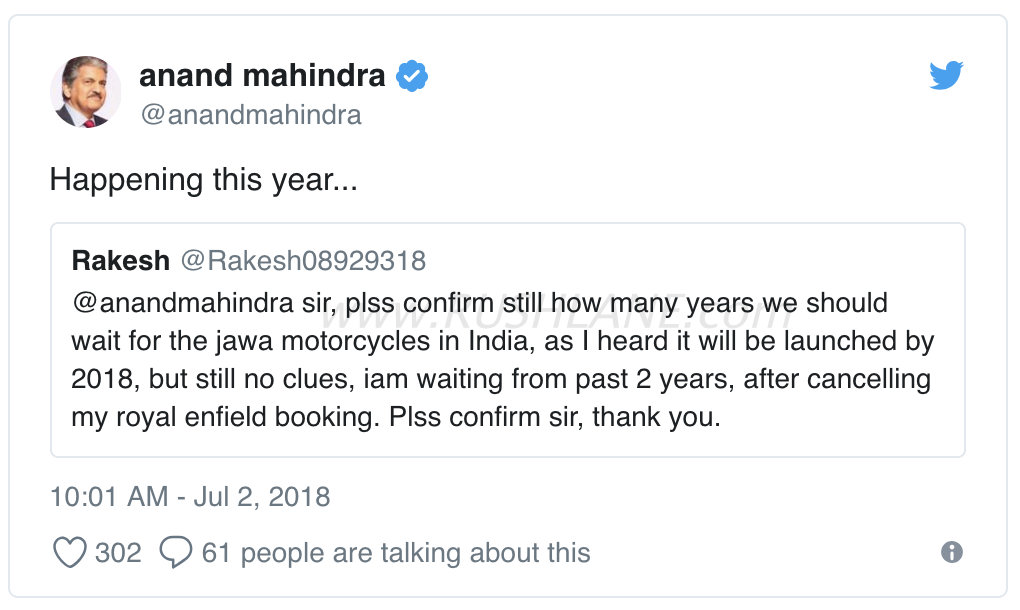 Mahindra and Mahindra may scale down to 250cc or scale up to 350cc so as to retain the Jawa’s iconic heritage.

The Mojo series have not received much response but the engine is reliable and offers much potential if re-engineered and used on new models. The engine is quite capable and features FI as well as dual exhaust, which we have already seen on board the Mojo XT300. Now, the same engine will be seen on the modern Jawa bikes.

Jawa bikes will receive retro styling and by using this existing engine platform will allow Mahindra to position the bikes in an affordable motorcycle category. The Jawa branded motorcycles will be launched in India by the end of this year and prices are expected to be in the INR 2-3 lakh category.

Upon launch, they could rival the Royal Enfield range, which owns over 85% market share in the 300-500 cc segment in India.