Mahindra launched the 2020 Thar at a starting price of Rs 9.8 lakhs – Convertible Soft Top is priced from Rs 11.9 lakhs

The video showcases that the soft-top can be opened and closed, by a single user, without any external help. To open up the soft top, one needs to first remove the side screens on the rear windows. Once the same has been done for both the sides, one needs to get inside the cabin, in the front seats and open-up the latch mechanism which holds the Soft Top in place. Opening up of the latch mechanism looks fairly easy.

Post that, the canvas (soft-top) needs to be pushed behind and the swing arms help the entire set-up to collapse towards the rear end of the vehicle. To improve the visibility in the rear-view mirror, it is recommended that one double checks the canvas and folds it properly. Take a look at the detailed video below.

The clear benefit of a collapsible Soft Top is that the canvas and its components stay inside the vehicle. Hence, the Thar can truly be called as a convertible. There is no need to store any of the components at the parking bay, which wasn’t the case with the previous generation model.

Just like the opening of the Soft Top, closing the canvas also seems easy. In the video, the presenter manages to open and close the Soft Top, in under 10 minutes. To cover the Thar back up, one needs to first push the retracted canvas towards the front. 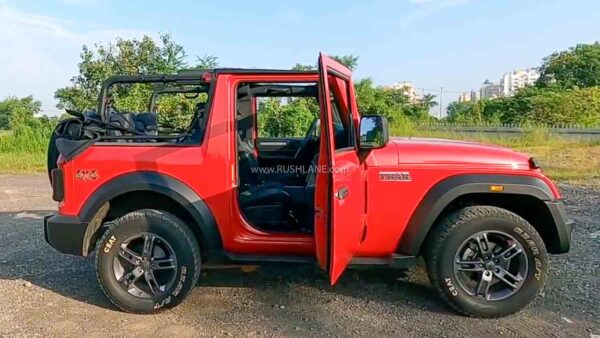 The secondary arms on the sides can be used to lift and provide direction to the Soft Top. Once the canvas reaches the front-end of the vehicle, one again needs to step into the front seat area of the vehicle.

Here, the latch-mechanism needs to be closed, by mating the components on the Canvas and the frame. Later, the side screens need to be re-zipped, which could take a while to get adjusted to. Once done, a recheck on the rear-screen will also be helpful, to minimize chances of any open-gaps.