Complying with Government of India’s new electrification policy, Mahindra is actively testing their second electric rickshaw in India. The prototype appears to be in a production ready format and will rival the Bajaj e-rickshaw on launch in the country.

Mahindra already has the e-Alfa electric auto rickshaw in sale in India. It now tests its second such electric model which compared to the e-Alfa Mini, launched in India in late 2017, will come in with new body works. This is in the form of Mahindra Treo e-Rick, which was showcased at the 2018 Auto Expo earlier this year. 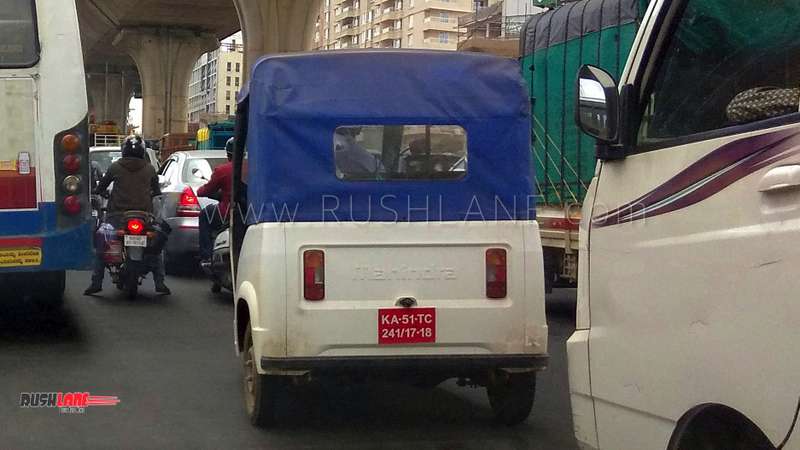 Judging from the spy shots, the new e-rickshaw will get its battery pack located just above the rear axle while the e-Alfa Mini sports its battery pack underneath the middle row of seats and just behind the driver’s seat.

This new location will give added interior space to passengers, thus allowing better comfort. The new e-rickshaw is a three seater, unlike the e-Alfa Mini which can seat upto four persons with two rows of seating facing each other. The new prototype was also seen with fatter tyres at the rear as against the slimmer tyres seen on the e-Alfa Mini. Watch the e-rick spied on test below.

Mahindra e-Alfa Mini is powered by a 1 kW/3.2 Nm engine via a 120 Ah battery pack. This electric motor allows for a top speed of 25 kmph in full payload. The new e-rickshaw is slated to come in with an even more efficient engine with better power output and also expected to offer direct drive transmission. The engine is developed Mahindra Bengaluru electric division.

Mahindra e-Alfa Mini is priced at Rs 1.12 lakhs in India while there are no indications on price of the new e-rickhshaw. Market launch is pegged for 15th Nov. Once launched, it will rival the Bajaj RE electric rickshaw which is also said to be in advanced stage of development.