Gearing up for its big launch in February 2019, Mahindra XUV300 is a sub-compact SUV entrant. Pre-launch discussions point to a great segment selection considering compact SUV sales have been growing, and one more offering would add some excitement to the space.

Mahindra XUV300 would take on segment leader Maruti Brezza, and Global NCAP five-star rated Tata Nexon, alongwith Honda WRV. While exterior photos were captured recently, now we can discuss interiors too owing to this video that captures the car’s interiors. 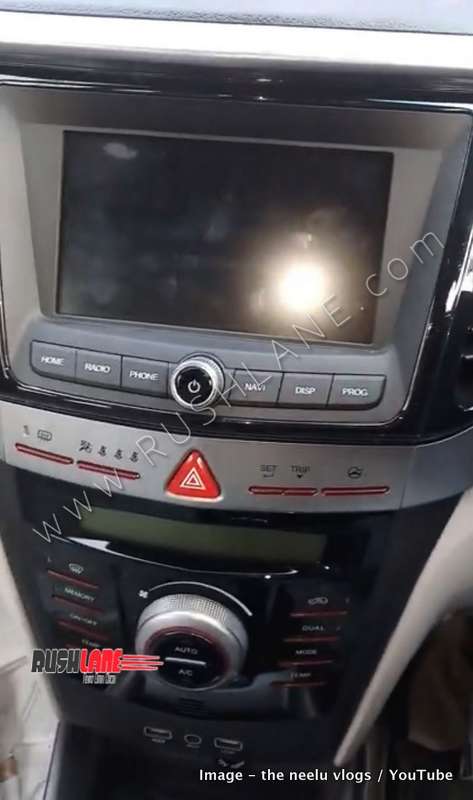 Mahindra XUV300 features a dual-tone interior, which is complemented by plenty of cream and piano black bits. The variant caught on video has a sunroof, albeit small, and a black centre console. Highlight on the center dash is a touchscreen infotainment system with AVN and rear parking camera display. You also get Auto AC, place to keep your phone, USB ports, 12V socket, etc.

The steering wheel is a combination of black and silver/grey with audio and cruise control buttons. Start stop button is located on the right of steering wheel. The compact SUV features six airbags and disc brakes on all four alloy wheels. This is the first car in the segment to get all four disc brakes. Rear AC vents are not yet confirmed. Rear passenger seat get center arm rest, as can be seen in the video below.

Based on Ssangyong Tivoli, XUV300 shares its monocoque frame. Keeping in mind Tivoli’s fame in South Korea, and it’s promise of safety, XUV300 would be aiming high. Only recently Mahindra Marazzo was awarded 4-stars by NCAP.

Engine options include a 1.5-litre diesel engine and a 1.2-litre petrol engine mated to a six-speed transmission. AMT options will be added later. Power output of the diesel engine will be 123 PS and 300 Nm, making it the most torquey engine in the segment, while petrol engine will deliver 120 PS. Below are the detailed photos of the leaked interior of Mahindra XUV300.