A few days back, photos of a crashed Mahindra XUV500 went viral on social media. They were posted by Team-BHP member arvindb4. This is what he had said – “Mahindra XUV500 W8, 2013 model. None of the 6 airbags deployed. No seat covers, no accessories, no bumper guards. Seat belts on. My son suffered from severe traumatic brain injuries. Right side of body, speech, hearing, motor skills are severely impaired and damaged.”

Arvind also shared images of his car. The car was badly mangled. Seeing the images, one would say that the airbags should have had deployed, not 1 but all 6 of them. But that was not the case. None of the airbags deployed in this crash.

Usually, car manufacturers don’t respond to their customers in such cases. But Mahindra has always responded to their customers. This time, President of Mahindra (Farm and Automotive), Mr Rajan Wadhera has come forward and shared a detailed letter regarding the issue. This is what he writes –

“We are aware of the accident involving an XUV 500 that occurred in May 2018 in Gurgaon. We are pained to hear that a young man who was driving the vehicle was seriously injured. We pray that he recovers quickly and is back in good health. We empathize with the situation and can imagine the agony that his family is going through. We are in constant touch with the customer.

There are questions raised by concerned people and our customers to understand the reasons for the non­ deployment of airbags in this incident. Some of the social media posts seem to conclude that because the airbag did not deploy in this particular incidence, the XUV500 is an unsafe vehicle. Let me assure all that we take such incidents seriously and will conduct a thorough investigation once the vehicle is made available to us.

To reassure our customers and general public, we present below some facts and figures regarding the safety features of the XUV 500:

1. XUV500 was first launched in India in 2011. It was one of the first Indian designed vehicles, where all variants had airbags. Mahindra was thinking ahead of its time in providing vehicle safety, even though the regulations did not mandate such a requirement. This was also the first Indian designed vehicle where all variants had ABS as a standard feature. High end variants of XUV 500 even had ESP in 201 l. So far, we have sold over 219,000 XUV500 in India and our records indicate that over 7,000 airbags have been consumed in our dealer workshops. We have testimonies from our customers of how the structural integrity of the vehicle and the airbags have saved lives and reduced severity of injuries.

2. Usually, airbag deployments happen when the sensors detect a signal upon sufficient impact. Calibrations are meticulously carried out in a way that the deployment of airbags happens only when it is warranted and so that, the deployments are avoided when it is not warranted. There are well defined algorithms to decide the trigger of airbag deployments, based on nature of impact and speeds. Sometimes what appears to be a severe enough accident may not have enough impact intensity for the airbags to deploy.

4. Safety systems and the structural integrity that we provide in XUV500 in India is the same as what we provide globally, and XUV is being sold in the EU and several other developed markets in keeping with their standards and norms

It is extremely important to analyse and reconstruct this accident case. We have been in communication with the customer since the date of vehicle reporting at dealership to obtain access to the vehicle and to conduct the investigation. The vehicle access should now be happening soon.” 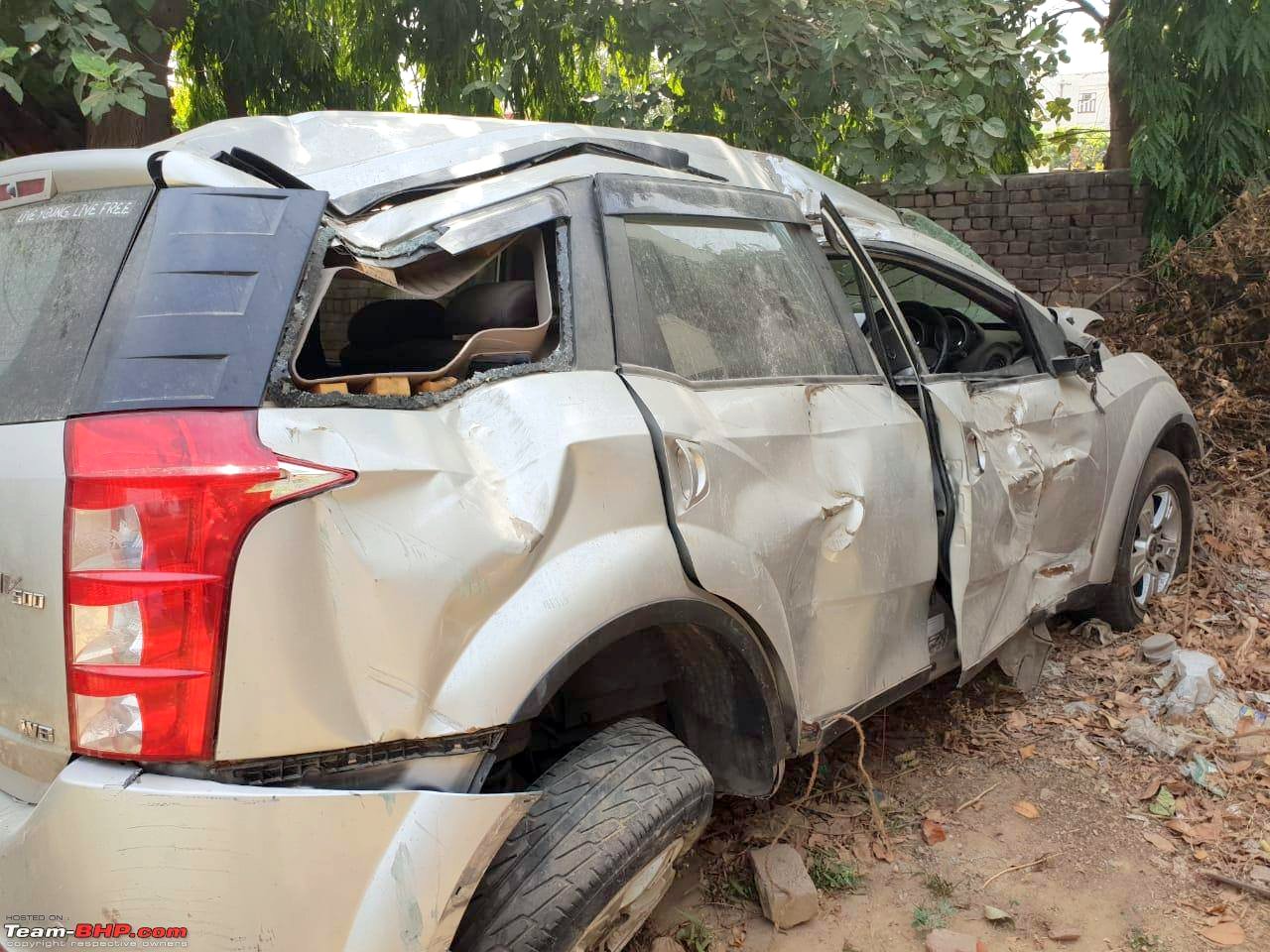 After this letter was published, owner of the crashed Mahindra XUV500 in question, Mr Arvind has also responded. This is what he writes –

“I am amazed and astonished and shocked by this letter reproduced from Mahindra. Now since they have chosen to, I think it’s time that I should share the entire chronology of messaging, mailing and conversations with the entire hierarchy of Mahindra, like a white paper. And the anguish, angst, insensitivity and corporate bullying I was subjected to.

I can understand their discomfort at their brand getting nailed and their customer service coming to their rescue. I demanded for a third party probe and one that is the best in the world. I have repeatedly requested for their airbag crash and certification reports for my model in the format required. None has been replied to. It’s the same story from the beginning of insisting on me and coaxing and bullying to handing over the critical components of the car and the car itself. Cleverly worded mails as replies to my mails that confirm nothing but help you drive in circles.

My son is just out of a major brain surgery and due to infections earlier caused by multiple skull fractures and excessive bleeding, is still under observation in the hospital.

I think Mahindra chose an apt time to reinforce my determination and commitment to fight for this cause not only for Madhav but for each and every consumer for this car and the likes of such vehicles. It’s plainly a diversion tactic through this letter reproduced.

I am writing this mail pacing up down the hospital corridor feeling frustrated and distressed. I request you all to give me time until my son is discharged, to reply on this and present the truth. Not to win brownie points but to present facts as they are.”