Maruti Brezza is no longer the best selling sub 4 meter SUV in India. That title now belongs to the Hyundai Venue, which was launched early this year in May 2019. One of the major reason behind Brezza losing sales to Venue, is the non-availability of a petrol engine option.

From selling 14,181 units in July 2018, sales of Maruti Brezza declined to just 5,302 units in July 2019. This is the lowest monthly sales registered by Maruti Brezza in a long time. In order to get back sales, Maruti will launch a petrol variant of Brezza, which will replace the current diesel BS4 1.3 liter engine. 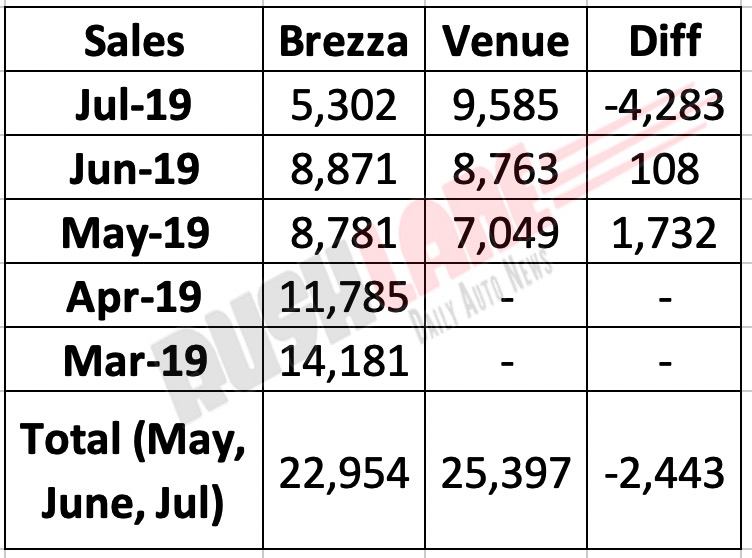 This was confirmed by none other than the Chairman of Maruti Suzuki, in an interview recently. The same can be viewed in the video above. Mr R C Bhargava, Chairman, MSIL stated that they will launch petrol Brezza BS6 variant by early 2020 calendar year. We expect the Brezza Petrol BS6 to launch at 2020 Auto Expo, which will take place on 7th Feb 2020. Watch Mr Bhargava’s full interview in the video below.

At the same time, Maruti will discontinue the diesel Brezza. This means from early next year, Brezza will only be offered with a petrol 1.5 liter BS6 engine, the same engine which also powers the Ciaz and Ertiga currently. This petrol engine is capable of 104 PS power and 138 Nm torque mated to a 5 speed manual. It is also offered with a 4 speed auto option. The engine will get SHVS mild hybrid system as well.

Launch of a petrol variant of the Brezza will also be a part of the SUV’s midlife makeover. It could see some new features both in terms of comfort and safety. One can expect introduction of features like side airbags and a sunroof, to make the Brezza more competitive against Hyundai Venue. The Brezza petrol will also get the latest in Maruti Suzuki’s Smart Play and Smart Connect systems.