Maruti has already launched multiple BS6 compliant cars in India. In fact, 70% of their petrol car line-up is now BS6 compliant. And all this has been done ahead of the upcoming BS VI emission norms, which comes into effect from 1st April 2020.

Maruti BS6 cars on offer include Alto, Baleno, Swift, Dzire, Ertiga, XL6, S-Presso, WagonR. Next in line for launch is the Ciaz BS6. Ahead of launch, specs of Ciaz BS6 petrol SHVS have leaked.

As per the leaked document, Maruti Ciaz BS6 petrol SHVS will be available in 4 variants. These are Delta, Zeta, Alpha and S. All powered by the same 1.5 liter petrol BS6 engine, which powers the Ertiga and XL6. 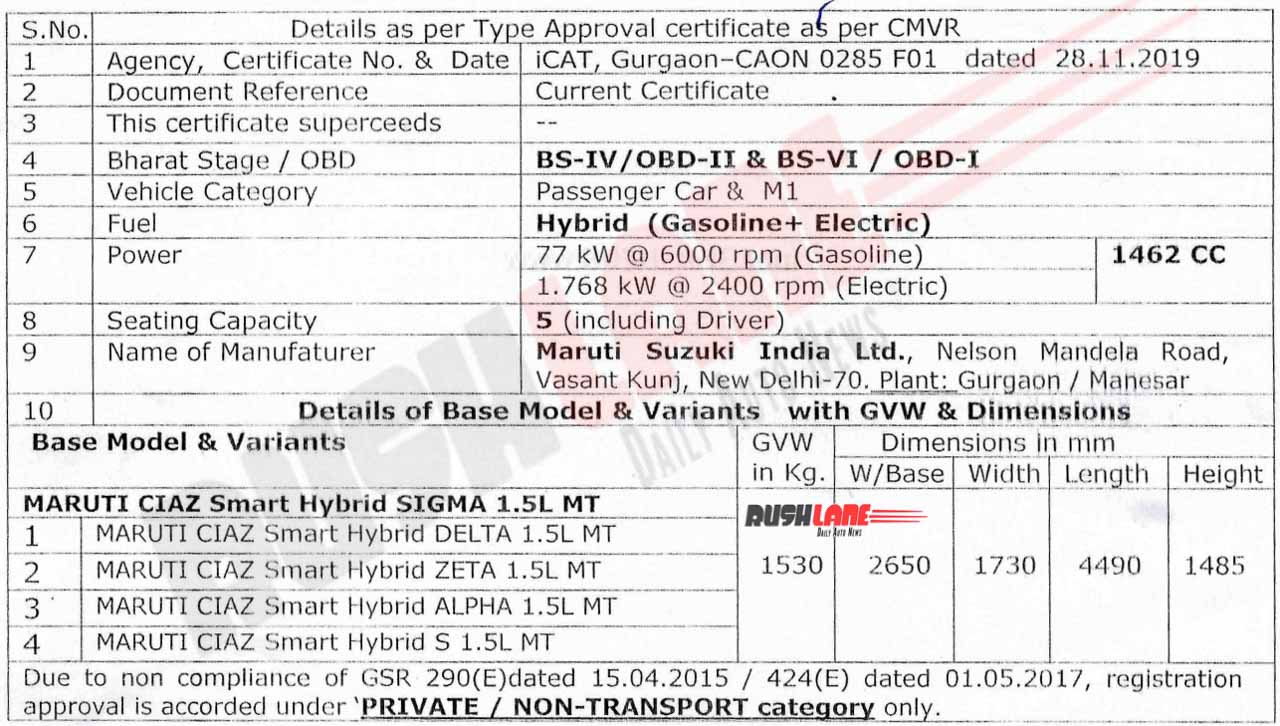 It is to be noted that the Ciaz had received a mid-life facelift earlier in August 2018 and came along with a new 1.5 litre K15B petrol engine. Later, Maruti also introduced a new in-house developed 1.5 litre diesel engine which replaced the Fiat-sourced 1.3 litre diesel unit. With the upcoming upgrade, it is unlikely that the sedan will see any major change except getting cleaner engine under its hood.

Already spied on test, it was spotted testing had the ’Smart Hybrid’ badge which means that the sedan will continue to have a mild-hybrid setup even in the future. The current system (available on the K15B version) comprises of a dual-battery setup and an integrated starter generator unit.

At the moment, the 1.5 litre K15B petrol unit dishes out 105hp and 138Nm of max torque. Gearbox options include a 5-speed MT and a 4-speed AT unit. The engine comes with a smart hybrid system which provides torque assist, idle start-stop functionality and brake energy regeneration, all of which help it to achieve a fuel efficiency figure of 21.56 kmpl (ARAI).

As per the leaked info, BS6 mill will deliver about the same power and torque figures as that on the BS4 engine. Mileage figure is also expected to be similar. Maruti will not launch diesel Ciaz BS6 for the time being. It may be launched by end of 2020.

As far as the Ciaz is concerned, it is usually found competing with Honda City and Hyundai Verna for the top-spot in the segment. Regular model updates/refreshes have usually helped each contender grab the top-spot for few months, at least, only to be dethroned by another one.

In the segment, Honda City is next in line to get a full-model upgrade and is expected to make its Indian debut at the 2020 Auto Expo in Q1 next year. Other competitors for the Ciaz include products like VW Vento and Skoda Rapid, however sales for these have been relatively insignificant in the past few months.