Maruti Ciaz, Ertiga to be manufactured by Toyota – Sold by Toyota dealers

As the auto industry adapts for greater good, Toyota and Suzuki are moving towards a future where they will not only be sharing cars, but platforms and EV tech. Toyota and Suzuki had last year announced that both company’s were coming together to discuss joint projects for tech development, vehicle manufacturing, and market development.

With discussions between both auto majors furthered, sharing of electrified vehicle tech including Toyota’s patented hybrid vehicle systems, and Suzuki’s compact vehicle architecture and engines is under consideration alongwith optimising and leveraging both company’s manufacturing capabilities for global markets.

The MoU between Toyota and Suzuki was signed on February 6, 2017. Following this an agreement was reached wherein Toyota Kirloskar Motor (TKM) in India will source the Baleno hatchback and compact SUV Vitara Brezza from Maruti Suzuki. Now in a further development, Toyota will also get the Maruti Ertiga MPV and Ciaz sedan, for sale in India.

By 2022, Toyota Bidadi plant will begin producing at least 4 Maruti cars – Baleno, Ciaz, Brezza and Ertiga. All cars produced by Toyota, will be wearing a Toyota badge. Toyota will also export Baleno, Vitara Brezza, Ciaz and Ertiga to Africa under its badge. In return of 4 cars, Suzuki will get two new electrified vehicles and the technology behind developing modern EVs. These two vehicles are RAV4 and Corolla Wagon, which are currently on sale in Europe.

In addition to this, Toyota and Maruti will jointly develop a C-segment MPV for the Indian market. This new MPV will be the first car, which will have been developed as a result of Toyota and Suzuki partnership. Alongwith leveraging Toyota’s electrification tech and Suzuki’s compact vehicle strengths, both company’s look forward to growth in production, and popularisation of EVs.

With global emission standards set for a cleaner tomorrow that would warrant huge fines if not adhered to, adapting new vehicle tech is the way into the future. Going forward, Suzuki would tap into Toyota’s hybrid vehicle system to cater to global market norms. In India, the partnership will look to localise the tech at hand. 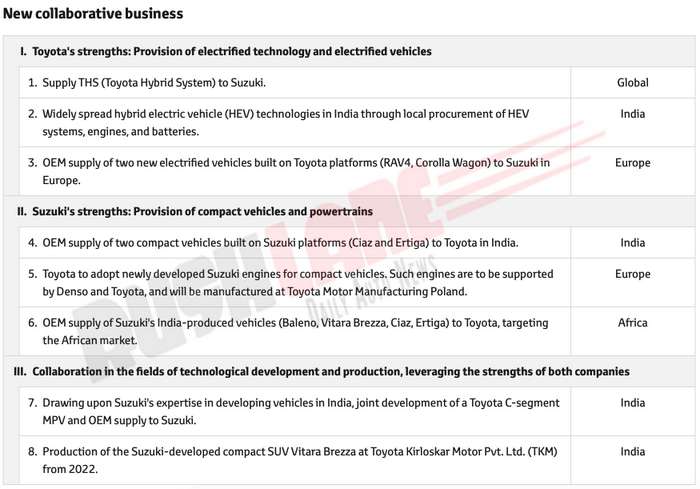 Toyota will rely on Suzuki’s compact car expertise, and put into use newly developed Suzuki engines for compact vehicles. Engines under consideration will be supported by Denso and Toyota, and manufacturing duty is being held by Toyota Motor Manufacturing Poland.

Toyota president Akio Toyoda said, “When it comes to vehicle electrification, which is expected to make further inroads, hybrid technologies are seen as playing a huge role in many markets … Through our new agreement, we look forward to the wider use of hybrid technologies, not only in India and Europe, but around the world. At the same time, we believe that the expansion of our business partnership with Suzuki — from the mutual supply of vehicles and powertrains to the domains of development and production — will help give us the competitive edge we will need to survive this once-in-a-century period of profound transformation. We intend to strengthen the competitiveness of both our companies by applying our strong points and learning from each other.”

Suzuki chairman Osamu Suzuki said, “At the time we announced our scope of cooperation in May last year, I spoke that we will strive for success globally. I have seen progress in the partnership since then, and it is my pleasure to be able to make this announcement today regarding the status of partnership on a global basis, including Europe and Africa. In addition, we appreciate the kind offer from Toyota to let us make use of their hybrid technology. We will continue our utmost efforts.”