A total of 50,759 units of the Maruti Ciaz sedan were sold through January to December 2018 surpassing sales of the Hyundai Verna at 42,605 units and Honda City sales at 42,045 units. These outstanding sales have seen the new Ciaz emerge as the best selling C segment sedan in India.

In the first half of the year, Maruti sold 24,999 units of Ciaz, while in the second half they sold 25,760 units. This shows how consistent Ciaz sales have been through the year.

A major reason for the significant increase in Ciaz sales can be attributed to the fact that the sedan receive fresh updates in August 2018. These included a new front fascia with a new grille, updated headlamps and new bumper design. 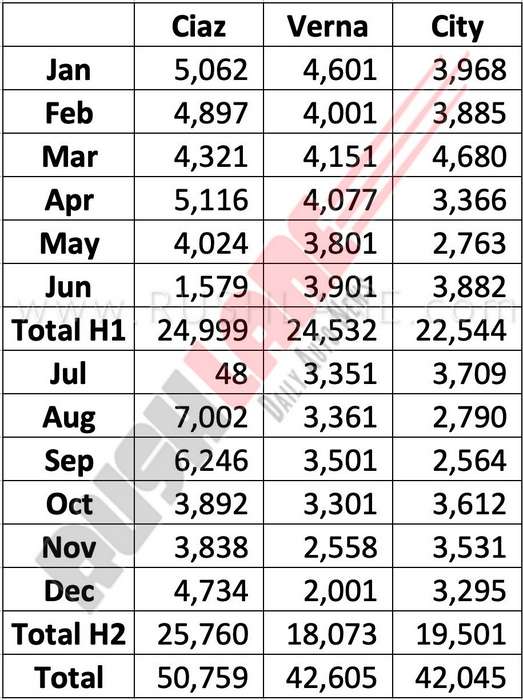 It also got new alloy wheels and new LED tail lamps at the rear while interiors also got updated with better instrumentation and a faux wood dashboard. The feature loaded interiors along with new leather upholstery added to the extra attention being received from buyers. Safety features were also added and the sedan now sports dual airbags, ABS, EBD, ISOFIX child seat mounts and reverse parking sensors.

Maruti Suzuki also introduced a new 1.5 liter K15B petrol engine to the Ciaz, taking the place of the older 1.4 liter unit. The Ciaz is also powered by a 1.3 liter diesel and both these engines get Maruti’s SHVS mild hybrid set up for better fuel efficiency returning mileage of 21.56 kmpl and 28.09 kmpl respectively. The Honda City on the other hand offers mileage of 17.4 kmpl on its petrol variant and 25.6 kmpl on its diesel counterpart, thus making the Ciaz a more preferred option among fuel efficiency centric buyers in the country.