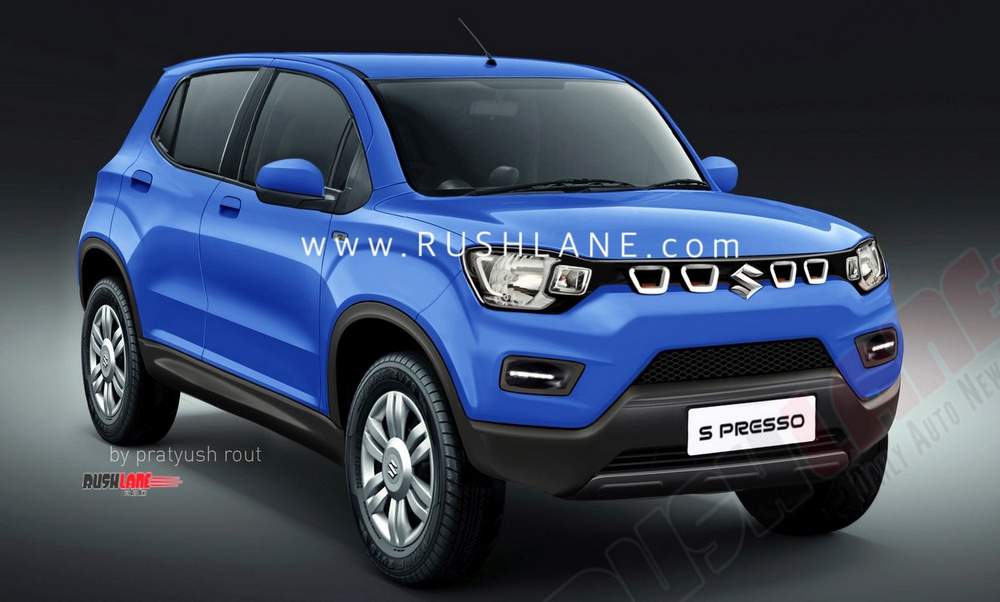 Camouflaged test mules of the Maruti S-Presso have been spied many times in the past, however a latest image now reveals the upcoming hatchback without any camouflage for the first time. It is expected that more details about the hatch will start to surface online, ahead of S-Presso’s launch which is scheduled for 30th September.

Maruti S Presso had originally started as the Future S concept which was displayed at the 2018 Auto Expo in Delhi. As per expectations, the quirky design of the Future S concept has been toned down to possibly appeal to a larger set of audience. Now, the S-Presso at max looks like a micro-SUV, something which the KUV100 from Mahindra had tried to do.

Some elements which can be easily noticed from the image are the slim grille with chrome inserts similar to the ones seen on the Vitara Brezza, halogen lamps (hinting lack of LED units), LED DRLs under the headlights and a blacked out B pillar.

To make the S Presso look more SUV like, Maruti has added black bumpers on the front and rear, apart from the body cladding which runs around the car. Other details which are visible from the spyshot are plastic covers for steel wheels, turn indicators on the fenders and flap-type door handles.

In terms of dimensions, the S-Presso is smaller than the Kwid, though larger than the Alto K10. However, it happens to be taller than both the Kwid and Alto K10. Ground clearance stands at 180mm which is equivalent to that available on the Kwid. Details about the interiors haven’t come out yet, however it is expected to feature a dark grey interior theme and the top-end variants will in all probability house a touchscreen infotainment system.

Maruti will launch the S-Presso with a BS VI emission norms compliant 1 litre K10B petrol motor. Transmission options on offer will most likely be a standard 5 speed MT gearbox and an AMT.

This is the same engine which also powers the WagonR 1 liter and the Alto K10. But on board the latter two cars, this engine is sold as a BS4 unit, but on board the S Presso, this engine will come as BS6 unit. Due to more refinement of BS6 compared to BS4, mileage of BS6 engine will be lower than the BS4 engine. Maruti WagonR 1 liter BS4 delivers 23.95 kmpl. This means Maruti S Presso fuel efficiency will be lower than 23.95 kmpl.

Also, it is to be noted that the S-Presso won’t be a replacement for any model. Instead, it will be a new model which will be sold along with other cars available at Maruti Suzuki Arena showrooms. Maruti will be counting upon the S-Presso to bring in additional sales and help it arrest its decreasing market share in the Indian automotive space.