Indian auto industry continues to battle the ongoing slowdown and delay in monsoons. Market leader, Maruti Suzuki India Limited has already announced 15 percent yoy production cut to balance slowdown in the auto industry. This will also help in reduction of growing inventory at the dealer level.

As it stands, average inventory for PVs declined to 30-35 days in June. This was up at 35-40 days in May 2019. With stock piles of 4-5 weeks, difficulties seep into logistics, and controlled production decrease can help MSIL deal with part of the problem.

Maruti Suzuki India domestic sales for July 2019 stood at 98,210 units, as against 154,150 units sold in July 2018. This is a massive decline of 36.3 percent, which is also the highest decline in sales registered by the company in recent years. 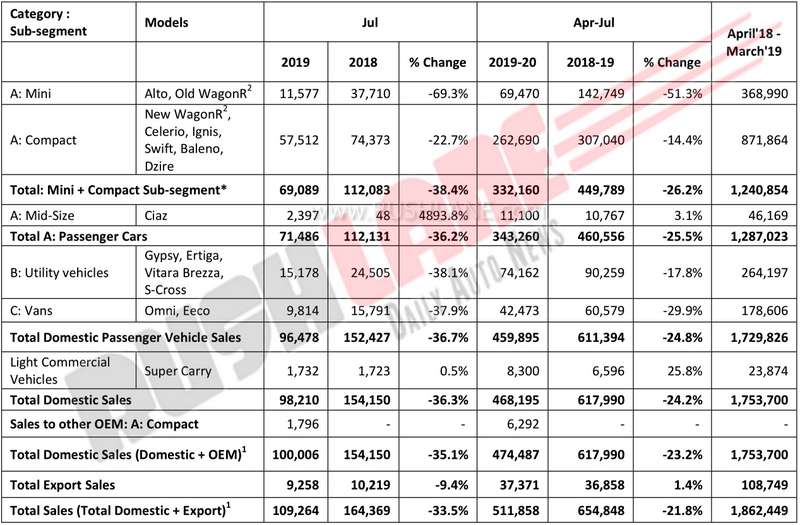 As you can see in the table above, how the sales over the last 12 months have been declining. In the past 12 month period, starting August 2018, Maruti Suzuki has lost 8.89 percent in sales volume with numbers have dipped by 1,54,316 units. The showing has been particularly stark through April to July, 2019 indicating a period of struggle through Q1, and an even slower start to Q2.

The industry is hopeful of a better showing in the coming months, owing to festivities and expected pre-buying as the industry transitions to BSVI compliant vehicles in April 2020.