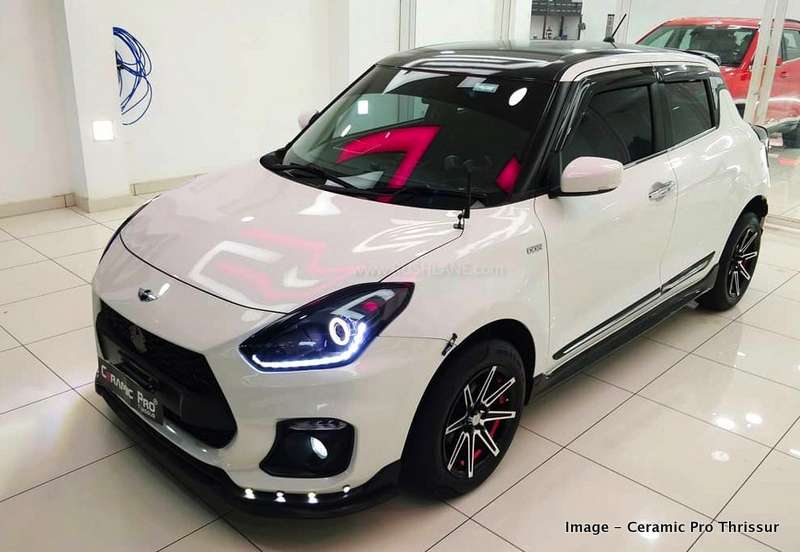 Maruti Suzuki Swift is one of India’s most loved hatchbacks and one of the most popular vehicles on sale in the country. Thanks to such popularity, it is also the favoured vehicle for aftermarket modifiers.

Even as the company offers official customization options to buyers of the new Swift, there are many who resort to aftermarket modifications specialists so as to give their vehicle a one of a kind stance.

Among the many modified Swift hatchbacks, there is one that stands out, courtesy Ceramic Pro Thrissur. These aftermarket modifiers have taken the regular Swift and fitted it with a Swift Sport body kit to give it a sportier appeal. 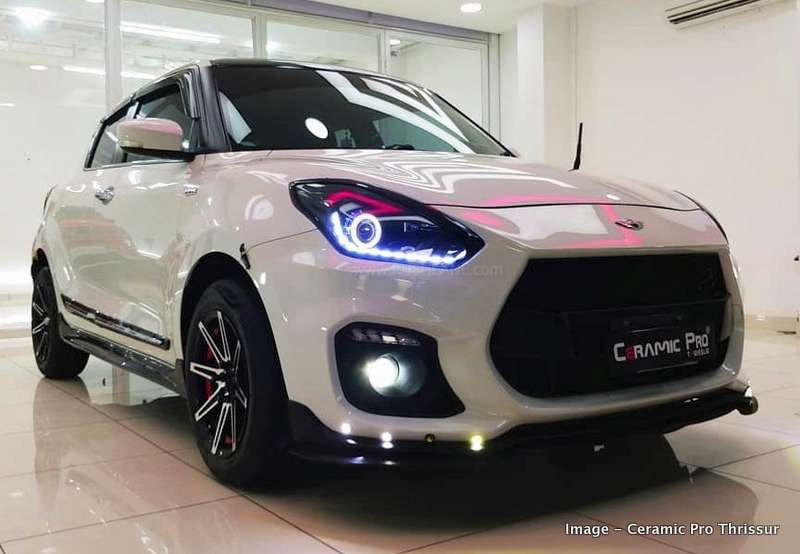 This particular hatchback is painted in a dual tone colour scheme with white body paint and a starkly contrasting black roof. After market headlamps enhance its appeal along with LED projector lamps with a corona ring and LED DRLs. Sportier looking aftermarket fog lamps are also fitted while the bumper itself has been modified.

Modifications continue to the base of the Swift which has also been given an all black colour scheme extending from its black splitters in the front to blacked out skirts at the sides. The bumper lip now houses four LEDs positioned below the fog lamps while its sporty standpoint is further enhanced by red brake calipers and multi spoke alloy wheels fitted with low profile tyres.

Maruti Suzuki Swift given an aftermarket makeover at Ceramic Pro Thrissur does not include any interior modifications while the engine is also retained from its stock model. The Maruti Suzuki Swift on sale in the country is powered by a 1.2 liter, 4 cylinder, K-Series petrol engine offering 82 bhp power and 113 Nm torque. It also gets its power via a 1.3 liter Fiat Multijet diesel engine capable of 74 bhp power and 190 Nm torque. These two engines get mated to a 5 speed manual transmission which is offered as standard or a 5 speed AMT as an option.

The Suzuki Swift Sport, sold in international markets is powered by a 1.4 liter Boosterjet turbo petrol engine offering 140 PS power and 230 Nm torque. It was expected to be launched in India sometime last year but that did not happen as it was turning out to be too expensive a car.