On display at the 2018 Guangzhou International Auto Show in China, the MG eZS SUV all electric vehicle has been showcased in production format. It looks identical to its conventionally powered counterpart; but is painted a new shade of blue and sports the eZS badging. A charging port is noted on its front grille. Sitting on 5 spoke alloy wheels, the MG eZS SUV gets a panoramic sun roof and a large touchscreen infotainment system with navigation.

Showcased in China, this new electric SUV is a global car. It has plans to enter global markets, including India. MG Motor India has confirmed that they will launch an all electric SUV in India by 2020. It could very well be the eZS.

MG eZS SUV is powered by a 48 kWh lithium ion battery pack which the company claims offers 115 hp power and 255 Nm torque. Acceleration from 0 to 50 kmph could be achieved in 3.1 seconds while the electric SUV will be able to travel upto 425 kms on a single charge.

The battery are made in China. MG’s parent company, SAIC has entered into an alliance with lithium ion battery makers Contemporary Amperex Technology Co. Ltd. It is this company which will be responsible for assembly of the battery pack in India. 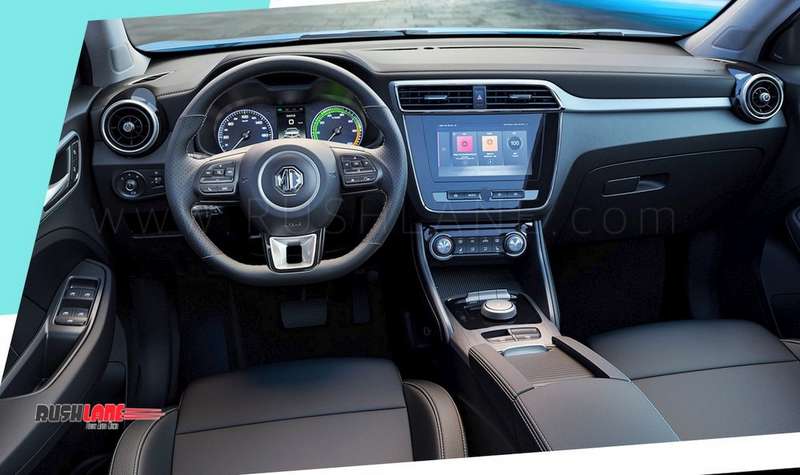 Ahead of launching the electric SUV, MG will first launch a petrol and diesel powered SUV. This SUV will be offered with manual as well as automatic transmission option. It will be the size of Honda CR-V. This new SUV will be launched in Q2 2019. It will be manufactured locally, and will have localization of 75% or above.

Speaking about the electric SUV, no launch date has been announced, but MG has revealed that they will launch their electric SUV in India within 1 year of launching their 1st SUV. This means one can expect the launch of eZS by Q2 2020 in India. It will be assembled at MG’s new plant in Halol, Gujarat. The current capacity at the Halol plant is at 80,000 units per annum which can be expanded to 2,00,000 units depending on requirement.

MG India will set up a total of 45 dealerships with 100 touchpoints. Once launched the MG eZS SUV will compete with the Hyundai Kona Electric which will also be locally assembled locally and will be priced in the Rs 25 lakh region.