MG Motor has confirmed that they will launch their first ever car in India by June 2018. This will be in the form of a 5 seater C-segment SUV, which will be even longer than the 7 seater Honda CRV on sale in India. Though the name of this SUV has not been revealed officially, reports suggest it could be named Gloster – inspired by the British racing heritage.

MG Gloster SUV was recently spied testing in the city of Ahmedabad by Rutvij Shah. It is here that the Gloster’s Audi styled progressive LED turn indicator setup was spied. This will be the first time an SUV in the Rs 20 lakhs segment will get such a feature. Usually, it is seen in more expensive Audi cars. 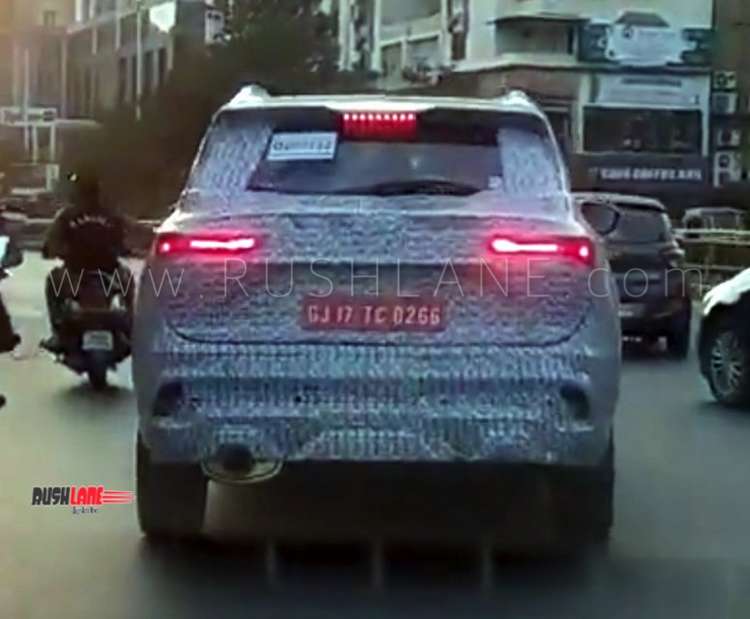 MG Gloster SUV will enter production at the company’s Halol plant, about 140 kms from Ahmedabad. The plant was purchased from General Motors and is being readied for production of MG Motor’s first Indian launch. The company has invested Rs 2,000 crores in phase I. An overall investment of Rs 5,000 crore is earmarked over the next 6 years. MG Motor has plans of 1 lakh units production per annum at its Halol plant.

The five seater Gloster SUV will infact go up against Tata harrier, which is scheduled for launch in January 2019. Tata Harrier is going to be priced in the range of Rs 16-21 lakhs on road. MG has also promised an aggressive launch price.

A high level of localisation will help price the MG Gloster SUV adequately for its big fat Indian launch. Power comes from a Fiat sourced 2.0 litre diesel engine that returns max power of 168 bhp and 350 Nm of torque. A petrol engine expected to be used is also most likely to be Fiat sourced. This would indicate similar powertrains as seen powering Jeep Compass, which is a 1.4 liter mill generating 160 hp and 250 Nm. Transmission options will include manual as well as automatic.