MG Motor made their entry into the India auto industry last year, with the launch of 5 seater Hector SUV. In about 1 year, Hector sales have crossed 25,000 mark in the country. Hector has managed to become best selling car in the segment, with over 50% market share. Since the launch of Hector, sales of rival cars like Harrier, XUV500 and Jeep Compass have declined by a considerable margin.

Earlier this year, MG launched their 2nd car, which was an all electric SUV. It soon became the most booked electric car in the history of India’s auto industry. Within days of its launch, MG revealed that the bookings of ZS EV have crossed 2,800 units.

At the Auto Expo in Feb, MG Motor showcased many new cars. Two of them were to be launched this year in India. One was Hector Plus 6 seater (that has been already launched) and second was the Gloster. Now, MG has officially teased Gloster SUV for the first time. Below is the video teaser.

MG Gloster is a rebadged version of the Maxus D90 SUV. It sold in several global markets such as Australia, New Zealand, Malaysia and Middle-East and is also on sale in South American countries like Chile and Peru. The Gloster gets the same platform as the T60 pick up truck and benefits from a ladder frame architecture.

In view of its positioning in the market, the MG Gloster will come in with all the latest in comforts, luxuries and technologies. These will include a panoramic sunroof, a digital instrument cluster and wide touchscreen infotainment system. It will also get i-Smart 2.5 connectivity and tri zone automatic air conditioning. 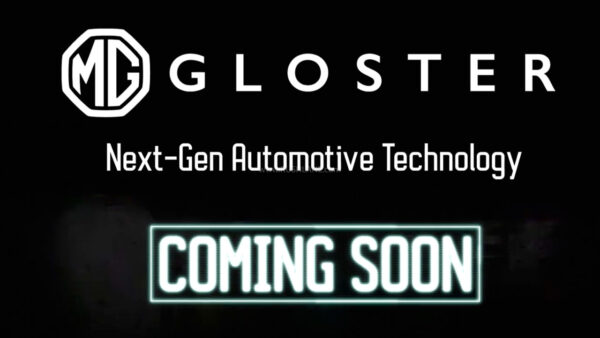 Gloster is benchmarked against Land Cruiser Prado and Jeep Grand Cherokee. It will come with Volvo XC 90 like intelligent features – like the front collision detection, Lane departure warning system, Auto Park assist and many more. The new Gloster will see safety features such as front and side airbags for all three rows, adaptive cruise control, parking sensors at the front and rear and a 360 degree camera. It will also get brake assist, tyre pressure monitoring system and ESP.

Engine specifications are not revealed as on date but the MG Gloster could receive power via a 2.0 liter turbo diesel engine that will offer 218 PS power and 480 Nm torque mated to an 8 speed automatic transmission. There will also be a 2.0 liter turbocharged petrol unit that will make 224.34 PS of power and peak torque of 360 Nm.