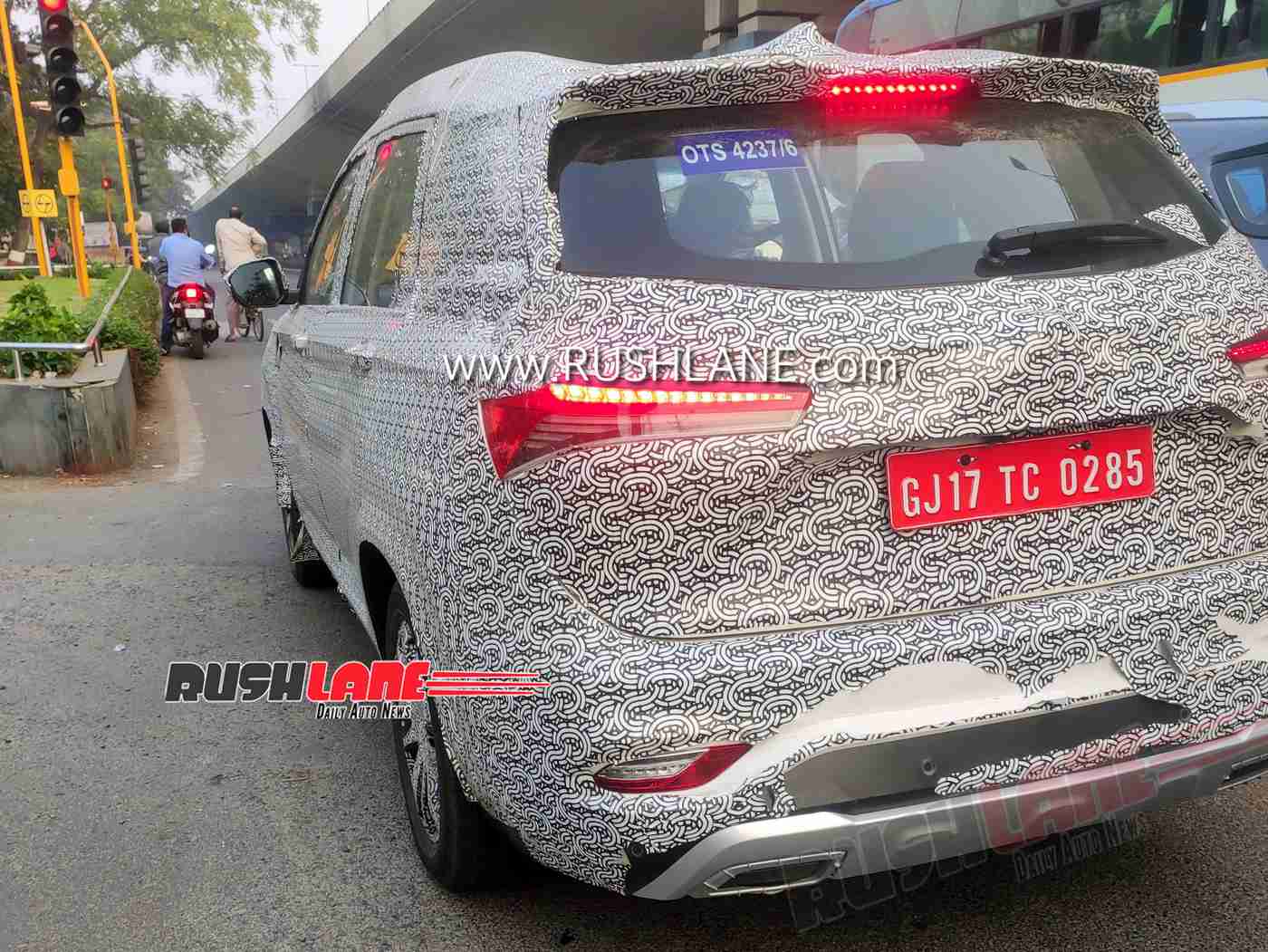 An MG Hector-based 7-Seater SUV has been spotted testing on Indian roads. Spied in Vadodara, near the MG India plant, the test mule has a noticeable difference compared to the regular Hector. It is not clear if the final product will carry a different nametag, or not – just how the Tata Harrier’s 7-seater model was named, Gravitas.

The new spy shots of the MG Hector BS6 six seater variant are credit to Instagram user vikram_Dari. These new photos confirm that the exteriors will be revised. The redesigned rear bumper surely confirms the possibility of a different front-end. MG Motor seems to have decided to make the faux dual-exhaust layout less obvious rather than ditching the idea. The new set of exhaust-like cosmetics seems to be ‘inspired’ from regular Mercedes-Benz products.

In addition to this, there is also new headlight LED DRL in the front. In the spy shots you can also see the new rear seat headrest, which are different to the ones that are on offer with the Hector today. The larger headrest confirms the presence of captain seats in second row of the MG Hector BS6.

The SAIC-owned MG Motor entered the Indian market back in June 2019 with the launch of the all-new 5-seater SUV, the Hector. It instantly became popular thanks to its extreme value for money in terms of equipment, plus the introductory after-sales bonuses.

The MG Hector has impressed many with its looks, but some did opine that the aesthetics were all over the place. Perhaps the most controversial topic of design would be the odd wheel-to-body size ratio. In this regard, the 6-seater variant seems to have made nothing better. The alloy size on the new Hector BS6 continues to be same as before.

The MG Hector is powered by an FCA-sourced 2.0-litre Multijet diesel unit (shared by the Jeep Compass and Tata Harrier in various states of tune) that makes 168bhp and 350Nm of torque. The petrol variant employs a 1.5-litre turbocharged unit that is good for 141bhp and 250Nm. The higher petrol mild-hybrid variant comes with a 48V electric motor that provides better fuel-efficiency and initial torque.

Transmission choices include a 6-speed manual as standard while the petrol variant can be opted with a 6 speed DCT unit as well. Engine choices should remain the same for the 6-seater MG product you see here, but with varied output.

During the launch of the Hector, MG Motor officials had confirmed that they will be following an aggressive product strategy which would include an all-electric product as well. Globally, the MG Hector is also sold in three different avatars: Baojun 530, Wuling Almaz (also a 7-seater) and interestingly enough; the Chevrolet Captiva.

The MG Hector was introduced around the same time when the Kia Seltos made its debut. For the same reason, they are two of the most talked-about products in the Indian market today. Even though they compete in two different segments based on specifications, the MG Hector and Kia Seltos share a similar price bracket. Once launched, the 6-seater MG Hector will mainly rival the Tata Gravitas, Mahindra XUV500 and even the Toyota Innova Crysta.