MG Hector SUV is set for launch in India later this year. It is currently being tested across various states in India. Last month spy shots of Hector SUV from Manali had emerged, and now the car has been spotted in the urban jungle of Bangalore. Exterior design is still a secret, as the SUV has been wearing a camouflage. But some exterior and elements have now leaked due to spy shots.

MG Hector is set to get multiple first in segment features. One of them is LED headlight in a twin setup with LED DRL sitting on top, which has now been spied. It also gets large rear view mirrors with integrated turn signal lights, large 17” 10 spoke dual tone alloy wheels and LED tail lights. A massive front grille and wide trapezoidal air dam were also noted 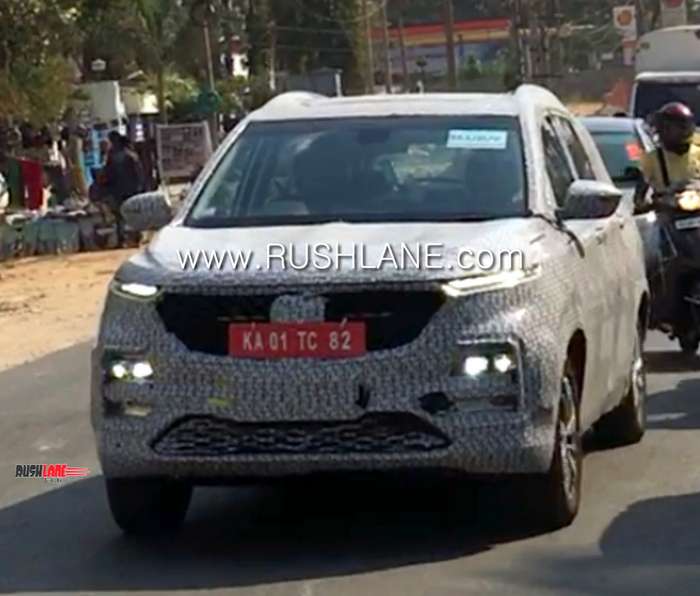 On the inside it gets a large infotainment system with a 10.4” touchscreen display. This screen will also control the HVAC. Its interiors will also boast of leather upholstery in dual tone finish of beige and black. There is steering mounted controls, a 360 degree camera, Harman Infinity audio system, 6 way adjustable driver seat and a music system that includes 4 speakers, 4 tweeters and a subwoofer.

Another first in class feature is mood lighting in 7 colours – Red, Blue, Yellow, Purple, Green, Orange, White. This mood lighting / ambient will be available in three different locations of the car – door trim (first in segment), footwell, and cup holder. It will also get a large panoramic sunroof.

MG Hector is slated for launch in the second quarter of 2019. It will be powered by a 1.5 liter turbo petrol engine and a Fiat sourced 2.0 liter diesel engine both of which get mated to a 6 speed manual gearbox and an automatic transmission. It will be produced at the company plant in Halol, Gujarat. It is expected to be priced in the Rs 15-20 lakh price bracket. In this price range it will rival the Jeep Compass and top variants of Hyundai Creta, Tata Harrier.