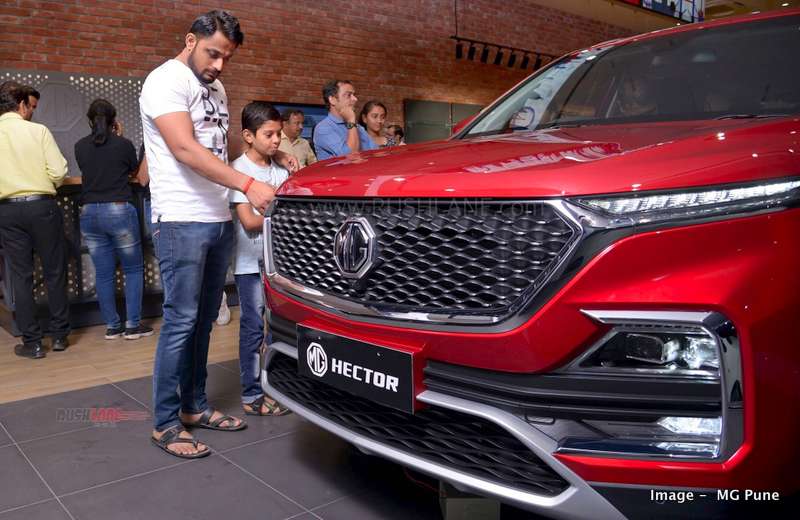 MG Hector is a 5 seater SUV which was launched at an introductory price of Rs.12.18-16.88 lakhs. It has met with resounding success in India. Within just 22 days of launch, MG India had to close bookings, for Hector, as waiting period was soaring to 10 months.

On the morning of 18th July, MG India declared that bookings of Hector will be closed from midnight, 19th July. This gave approximately a 36 hour window to those who were planning on buying Hector. It is in these last 36 hours of booking being open, the company registered record bookings.

From booking numbers at 21,000 on the morning of 18th July, MG Hector bookings crossed 28,000 by midnight 19th July – registering over 7,000 bookings in just 36 hours. With sales across India started, last month MG sold 1,508 Hector SUVs. This number is set to go up, as the company will be increasing production soon.

MG Hector is being regaled by buyers in India for its over 50 connectivity features while it is also offered with “MG Shield’ a first of its kind offering in the country. Called the ‘Internet Car’, the MG Hector has seen the highest demand for its two Smart and Sharp variants with over 50 percent bookings for petrol models.

The company wishes to cater to these bookings in a timely manner prior to opening bookings once again. MG India also seeks to increase production capacity to cater to this overwhelming response and is also working with suppliers to help the company boost production at the company’s Halol plant to 3,000 units per month.

Each of these variants is presented in four color options of Starry Black, Colored Glaze Red, Burgundy Red, Aurora Silver and Candy White. Hector Petrol DCT with a Glaze Red paint scheme has the highest waiting period of more than seven months across the country. The other two engine gearbox options of 1.5 liter petrol hybrid and 2.0 liter diesel command a waiting period of 4 and 3 months respectively.

As far as citywise bookings are concerned, the company has recorded the highest booking in Cochin with dealerships confirming over 1,000 units while Gurgaon, where MG Hector has its flagship showroom has amassed more than 650 bookings out of which 450 are for DCT variants.