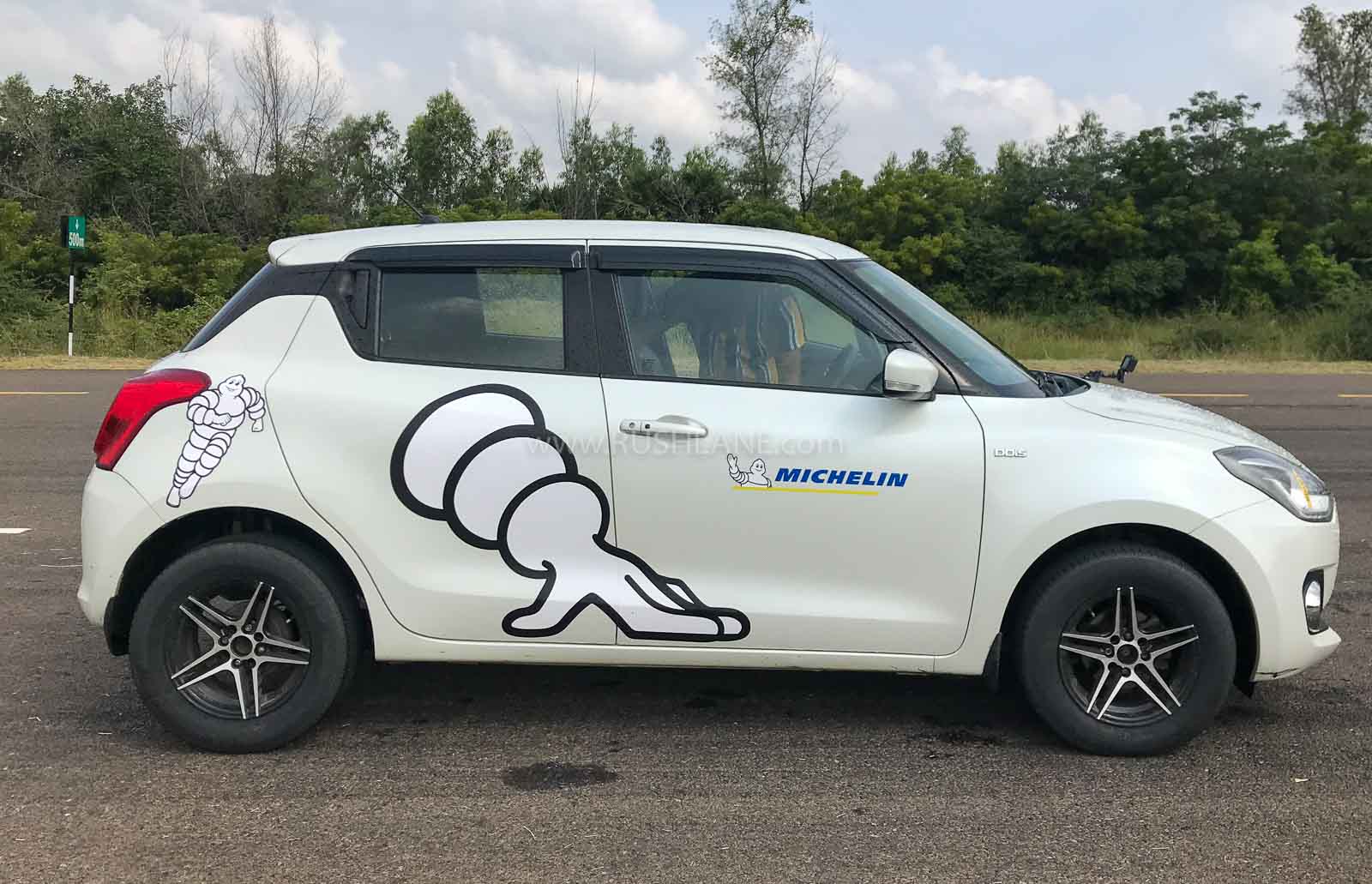 Micheiln launched new tyres called ENERGY XM2+ which is a successor to the ENERGY XM2. We were in Chennai recently to test these new tyres.

Unlike the predecessor, the new tyre has a lot to boast about, and Michelin couldn’t have done it more literally. The USP of the ENERGY XM2 plus is its consistency in the road grip throughout its life of several thousand kilometres. When we say grip, it means the general road holding capability while driving on various practical road conditions, and also the braking performance.

While handling is a quite subjective concept which can’t be demonstrated on a first person basis among so many journalists or prospective customers, braking quite definitely could be, and that’s what Michelin did with us to outright prove how true the new tyres are to the marketing slogans.

It’s very simple, Michelin took us to a safety controlled track, where the road is wet, and made us brake with full force on the wet road, and made us realise the amount of confidence and grip this new tyre had. How do we say it’s so much better than other tyres? They also let us do the same test on the same kind of car with competitor tyres, the Bridgestone B290, on the same wet road.

But that’s not the catch yet. Remember the USP, grip as good as new even at end of tyre life; now picture those tests happening at almost completely worn out tyres, in both cases, the Michelin and the Bridgestone! That’s how cool and confidently they proved their new tyre’s worth to us journalists who tirelessly look for ways to pull their legs and returned surprised. 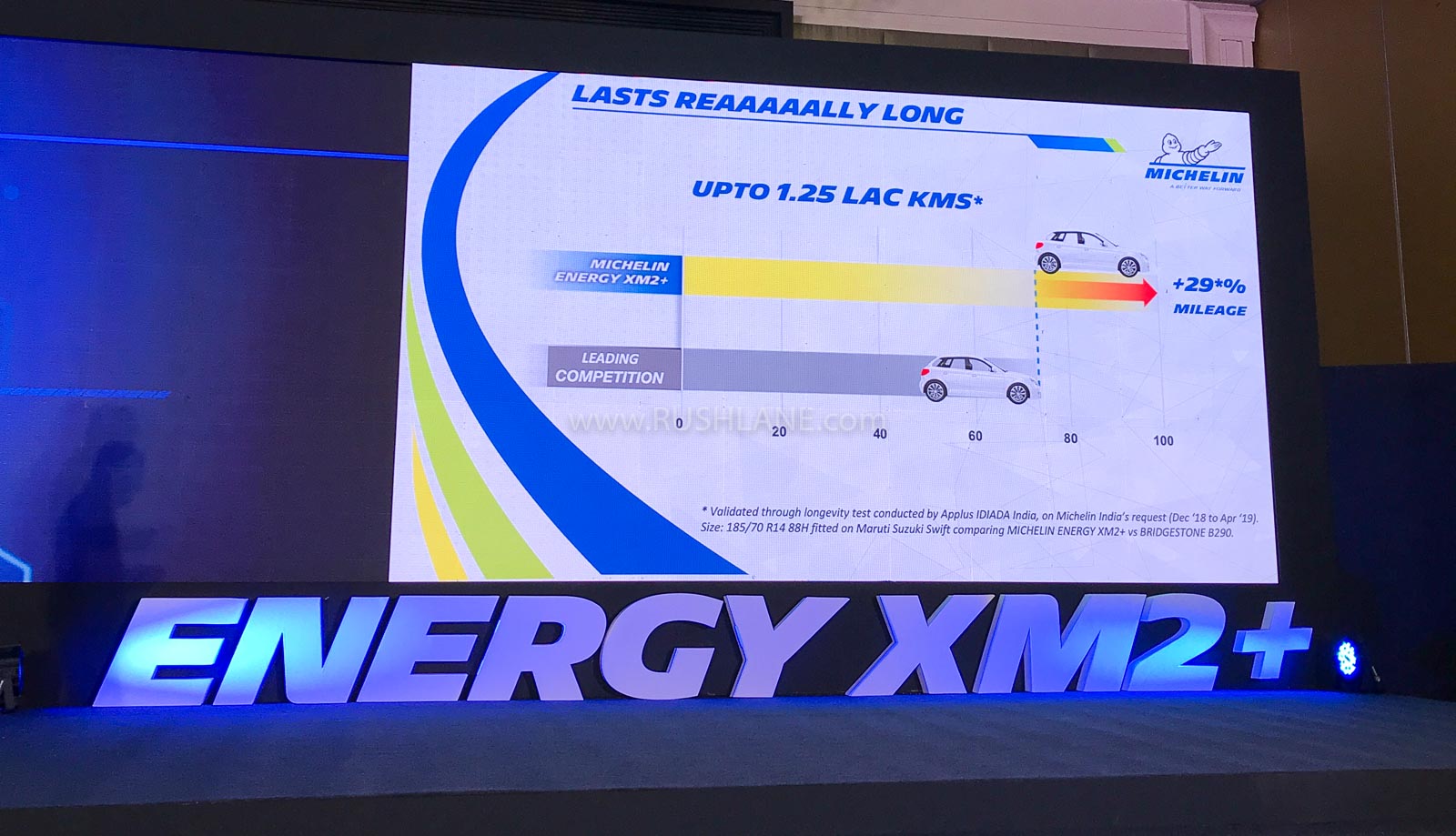 Both cars were Maruti Swift diesel, of similar mileage on the odometer, exact same model, just with different tyres, the ENERGY XM2+ and the Bridgestone B290, in the same end of life condition with 1.5 mm tread depth, and at same tyre pressure which is the OEM recommended pressure mentioned near the driver side door of the vehicle. It doesn’t get fairer than that.

The test track in question, was the WABCO Proving Ground near Chennai, which is sort of the go to place for car companies, tyre companies, brake system development companies and other vehicle technology and service providers go, to put their work to test before they proceed to homologation. So even the track where we did the test on the Michelin XM2+ was beyond legit. 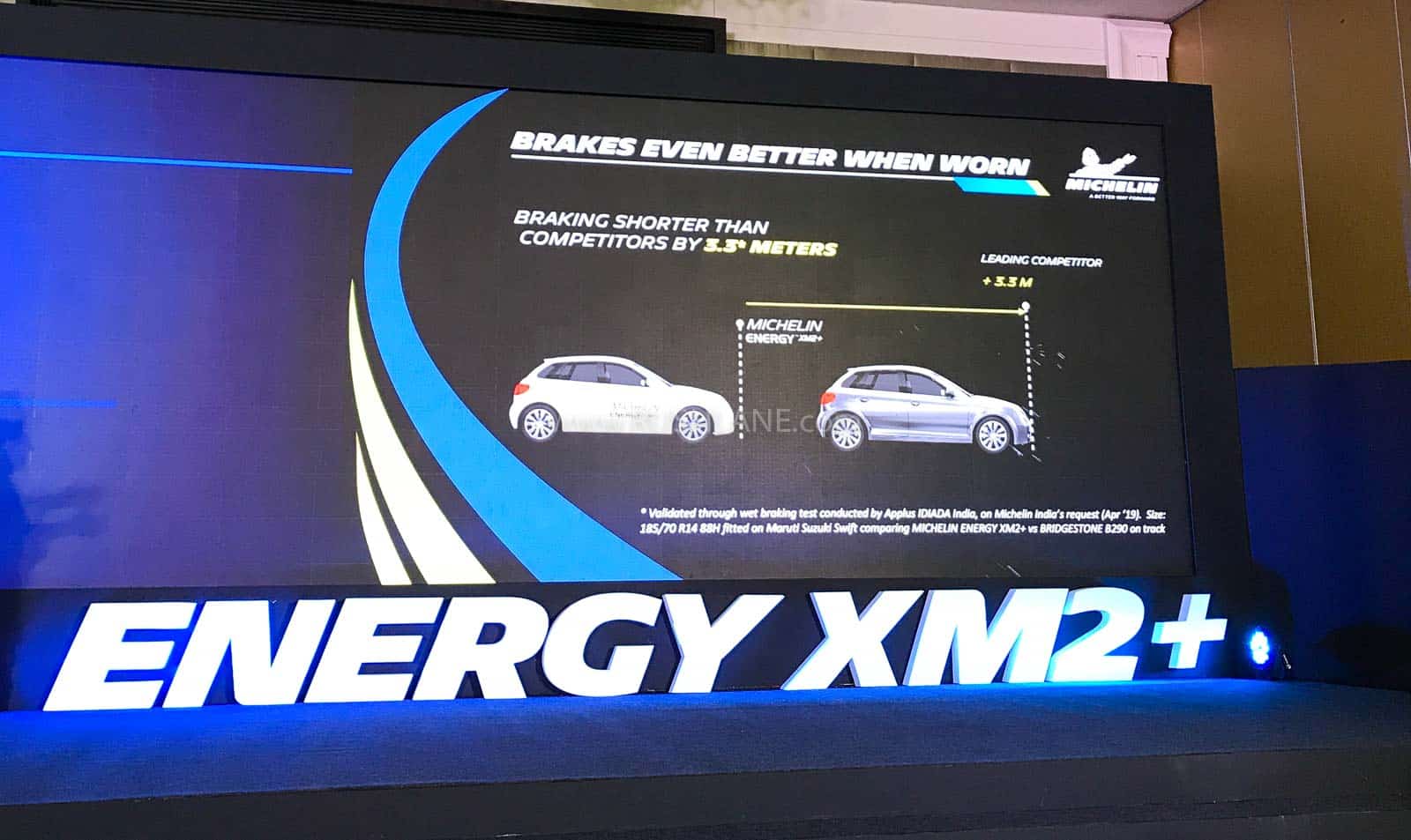 So in all credibility, we declare that the Swift with the Michelin XM2 plus tyres stopped almost 3.3 metres ahead of the other car, on wet road, which is roughly 10 feet quicker, which is way more than the difference between getting home and getting to the hospital, in case of an unfortunate situation ahead of the car.

Please note that we did the full force panic braking on both cars at 100 kmph on the wet road, and the cars already had ABS working at maximum effort. And since we could feel the ABS pulsating clearly on the brake pedal on both cars, we know for sure that the base brake system was in good condition, in case if anybody was wondering if the brake system was rigged to fabricate a desired outcome. 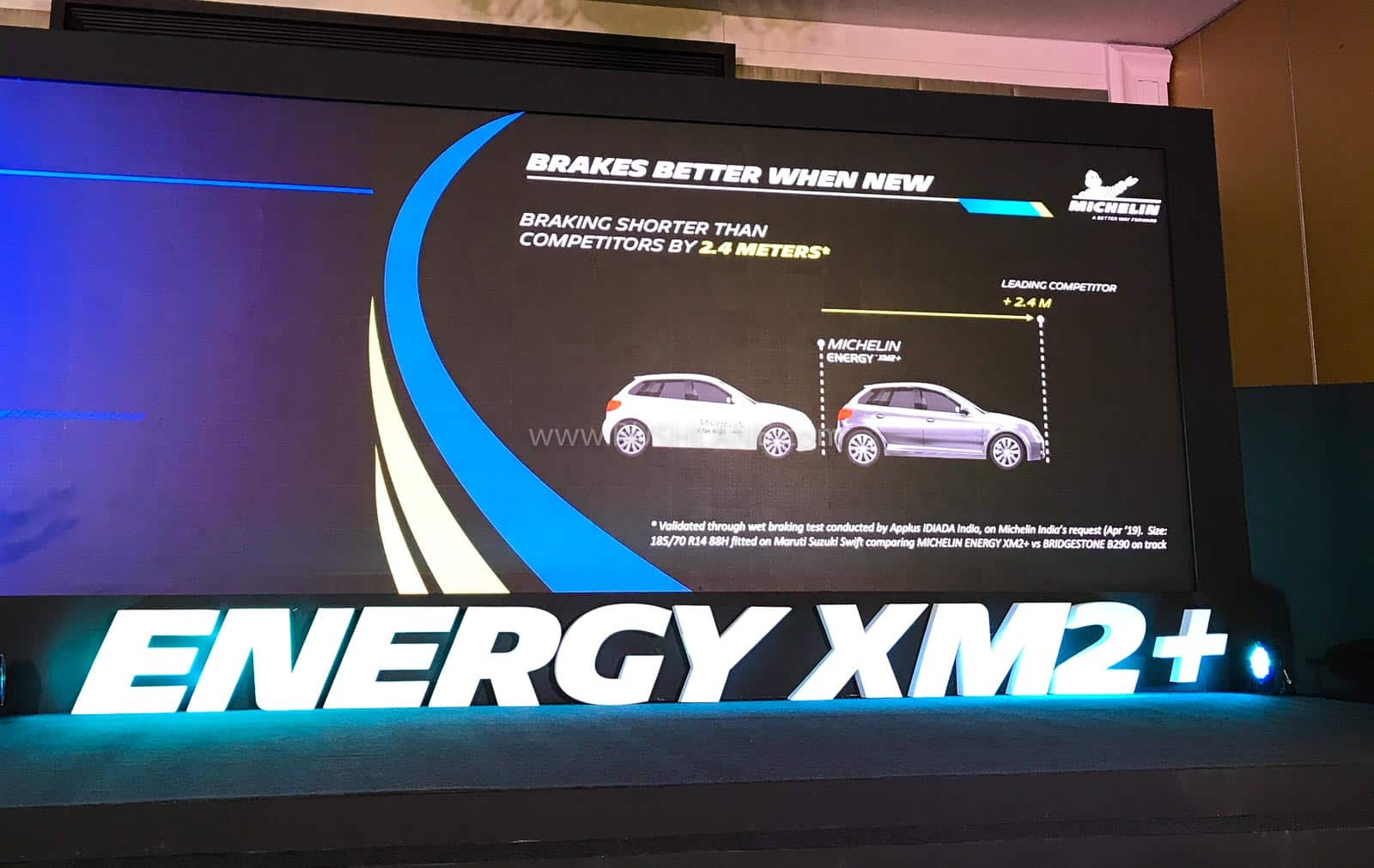 Michelin claims that in ideal driving conditions, the tyres would last up to 1,20,000 km, which is somewhat an average lifetime that a single owner would use the car for, and hence they state that the new ENERGY XM2plus lasts a ‘lifetime.’ They also called these tyres, the ‘fit and forget’ type.

So, bottom line, the Michelin XM2 plus tyres have a better grip, throughout its life till the time it is to be replaced, and they last longer than most tyres out there. Isn’t that the ultimate goal for a tyre manufacturer, and for the car owners as well? The company showed various graphs and charts detailing the numerous statistics of tests, life, performance, braking results, etc., which can be seen first hand in the image gallery below. We have conveyed the crisp version in the text so far. 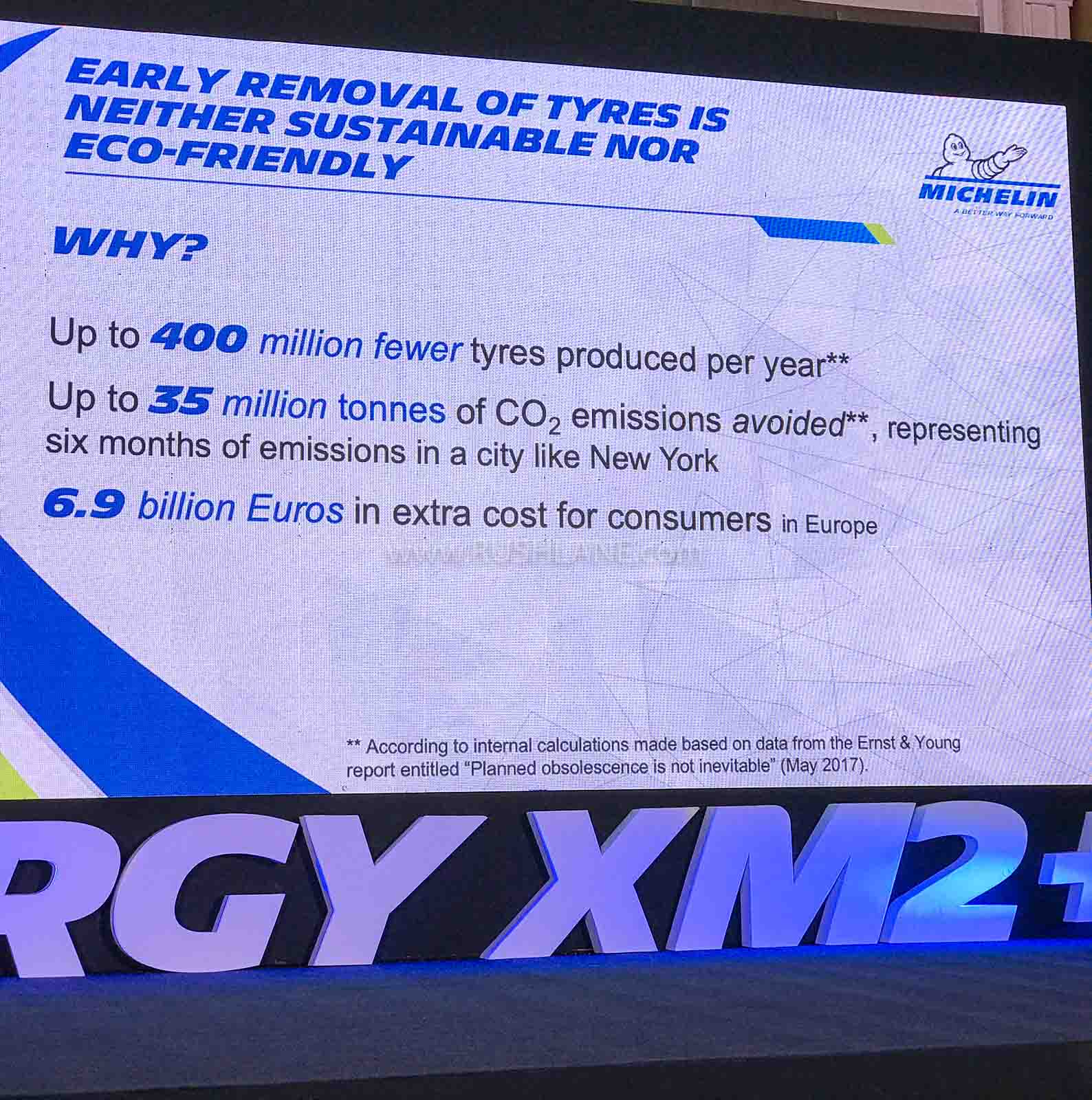 The Michelin ENERGY XM2+ will be available from this month (January, 2020) across all Michelin dealerships in India, phase-wise probably. So far this model is meant for, rather first launched for aftermarket replacement, and Michelin is working on deals getting this tyre to be factory fitted on popular cars. The XM2+ will be available in 30 different sizes, fitting 12- to 16-inch wheels, meaning it’ll be available for most of the cars plying on roads in India, starting with A-segment hatchbacks like the Maruti Alto, to C-segment sedans and Crossover SUVs too namely the Honda City and Hyundai Creta respectively. The starting price of a single Michelin XM2+ tyre is Rs. 5,090 which would be the smallest size. This is a tiny bit pricey compared to the alternates you’ll find on the shelves of various tyre dealers, but considering the testimony above, the price should seem more than justified.

Disclaimer – For this review, Michelin India invited and hosted us at Chennai. They paid for our travel, stay and food.