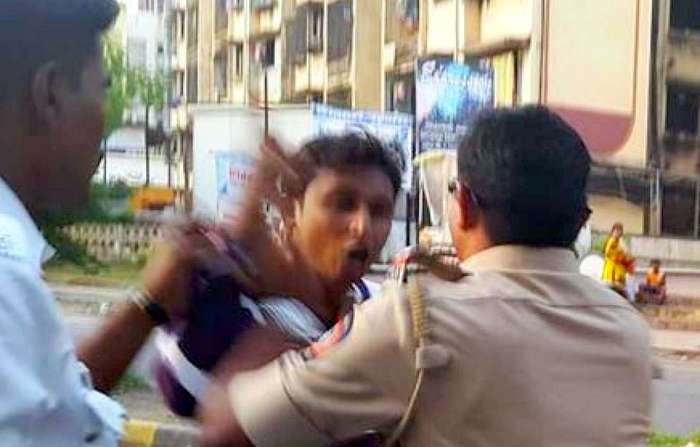 The video was shot yesterday in Vasai, Thane by Ramsagar Mishra. As per Mr Mishra, the incident occurred at 6-30 pm yesterday at Evershine Nagar, Vasai. He says, “Traffic police gundagiri at evershine nagar, vasai (e). Asst Ins assaulted a guy because he pointed out that police had parked their vehicle on wrong side.” When he saw that the Assistant Inspector got angry and started assaulting the individual for no apparent reason, Mr Mishra started recording the entire event.

In the video below, you can see how the cop harasses and assaults the young individual in broad public view. Clearly aware of the fact that the entire sequence is getting recorded on camera, the on-duty Inspector does not stop and continues with his ‘gundagiri’. The Assistant Inspector is accompanied by two Traffic Conastables, who do nothing to stop their senior from embarrassing the entire Police Department in broad daylight.

We are not sure what has happened to the three cops, but the individual is safe. Mr Mishra has forwarded the video and images to Phalghar SP and is awaiting reply. Mr Mishra adds, “It’s responsibility of every Indian to raise voice against unfair and to stop there and then only rather waiting for someone to come and help you.”

UPDATE 1 – Mr Mishra has shed more light as to how it all started. Here is what he says –

It all began when the individual wanted to go to a bank, which was on the other side of the road. He was going to enter the road from wrong side, but before entering the lane, he was confronted by traffic cops, who asked for his license. To which he said that he has not broken any law as he is yet to enter the lane from wrong side.

He did not show his license (bikers in India are very well aware of what happens once you hand over your licence to the cops). The individual did not give his license, probably because of the same reason. Now, in his defence, he makes an amateur mistake. He tell the cops that there are police vehicles parked on wrong side of the same road, pointing towards them.

Hearing this, the on-duty cops got angry and the situation went out of control, as you can see in the video below. The name of the three cops in the video are – Asst Ins Pravin Sawant, Hawaldar Arun sawant and Hawaldar Dipak Mahadik.

As Mr Mishra was recording the video, he too was a victim. His driver’s licence has been confiscated, just because he recorded the illegal act of Traffic Police.

Hat tip to Ramsagar Mishra for bringing this to light.