Back in June this year, Audi unveiled the new Q8 SUV in its production guise via official photos. They have now unveiled the car to the public in many European countries. In Germany and Poland, bookings have already opened. With this new Audi Q8, the automaker marks its entry into the full size SUV segment while official launch of the Q8 is slated for later this year.

2019 Audi Q8 measures 5 mt in length, 1.70 mt tall, 2 m wide and sits on a 3 mt wheelbase resulting in added interior space for occupants and significantly more boot space as well. Ahead of its launch, the new Q8 SUV has been spied on test in India too. 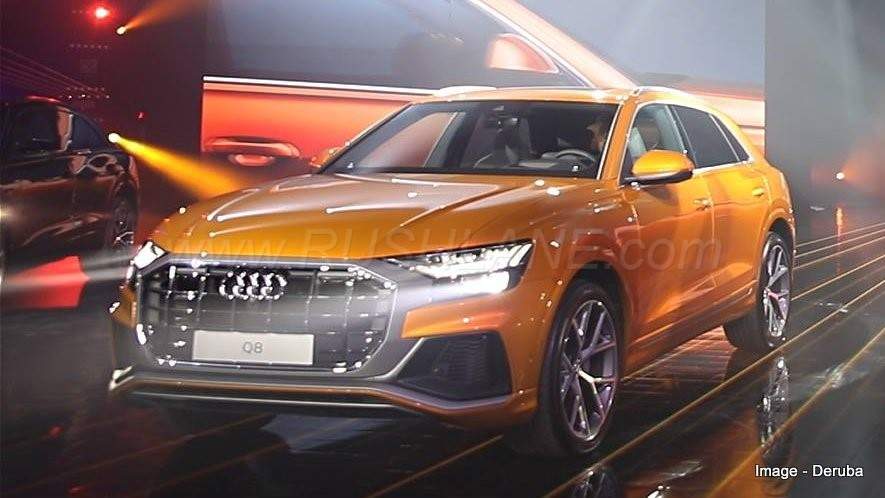 New Audi Q8 features a host of outstanding exterior features with a distinctive front grille, wedge shaped headlamps with digital Matrix laser technology and haunches that draw careful attention to front and rear wheels. The sill areas of the doors are finished with brushed aluminum accentuating Q8’s Bombay blue painted exterior. Doors devoid of window frames can be opened via touch sensors while wheel arches show off a double design. At the rear, a long roof edge spoiler is evident while strips of lights extend from end to end serving as both tail lamp and brake light.

Audi Q8 boasts of a spacious interior and a boot space that stands at 630 liter capacity. The central console is designed like the stern of a yacht and comes in with a shift by wire lever which the driver can control via an 8 speed tiptronic transmission.

Seating is comfortable and done up in fine Nappa and Nubuk leather in a pastel silver finish. High gloss carbon and aluminum is seen throughout its interiors while LED lighting brightens up the interiors, instrument panel receives a futuristic design and the display surface on the dashboard is called the Black Panel. 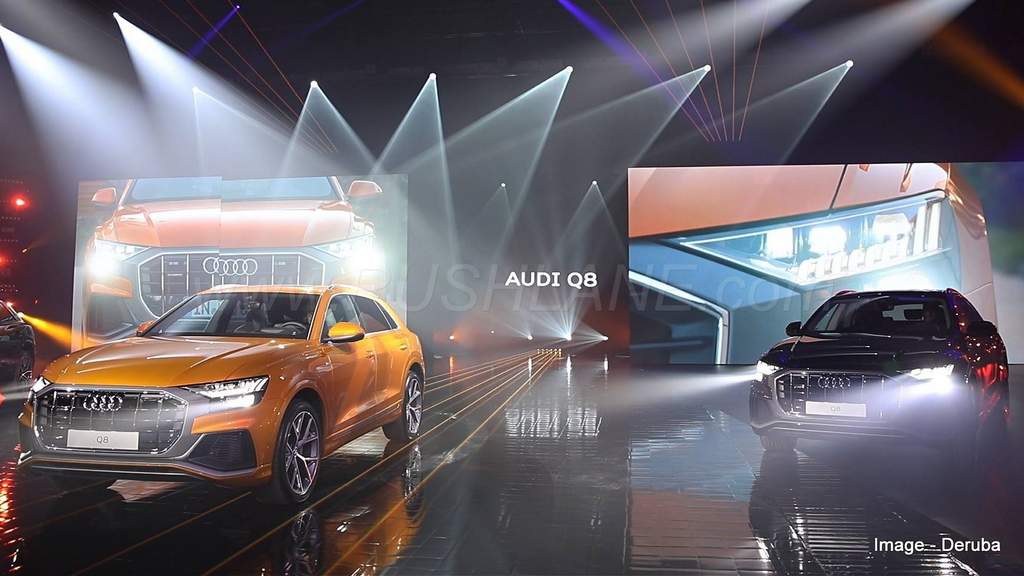 Audi Q8 claims a host of onboard technology to appeal to the buyer. All information and commands are via touch displays while a virtual cockpit and contact analogue head up display is also evident. A 12.3” TFT display reveals maps, lists and added information while an MMI monitor on the dashboard reveals infotainment and vehicle settings.

To be powered by an e-tron, plug-in hybrid powertrain, the Audi Q8 gets a 3.0 liter TFSI petrol engine offering 329 bhp peak power and 369 lb/ft torque and an electric motor. The 17.9 kWh lithium ion battery pack is positioned at the rear while it claims to offer an all electric range of 37 miles.

It can be charged via a 7.2 kW charger in two and half hours while fuel tank filled to capacity offers a range upto 621 miles. The electric motor adds another 124 bhp power and 243 lb/ft torque bringing totals upto 443 bhp and 516 lb/ft. Acceleration from 0 to 100 kmph is achieved in 5.6 seconds while top speed stands at 250 kmph.

Audi Q8 will be produced at Volkswagen’s Bratislava plant in Slovakia along with the present Q7, Porsche Cayenne and Volkswagen Touareg. It is expected to come in with a starting price of around £60,000 which is £12,000 more than the current Q7. India launch is next year. Expect price to be in the Rs 1 cr range.